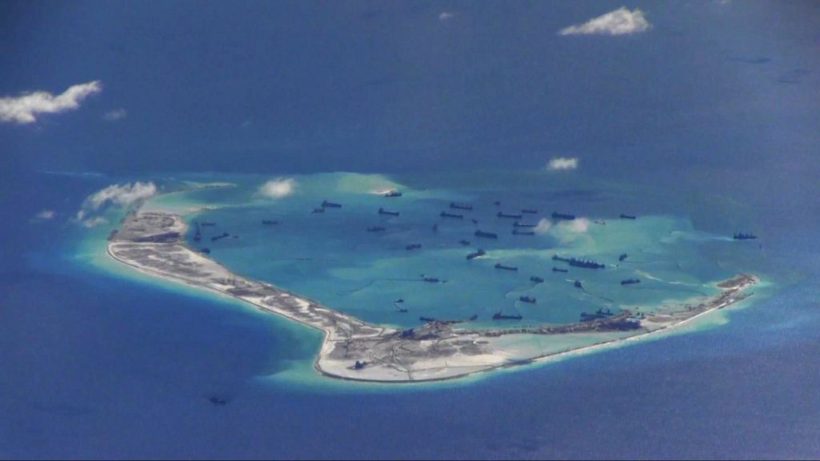 (by Ben Blanchard and Andrea Shalal, Beijing and Washington D.C.) REUTERS — A U.S. guided-missile destroyer sailed close to one of China’s man-made islands in the South China Sea on Tuesday, drawing an angry rebuke from Beijing, which said it had tracked and warned the ship and called in the U.S. ambassador to protest.

The USS Lassen’s patrol was the most significant U.S. challenge yet to the 12-nautical-mile territorial limits China claims around artificial islands it has built up in the Spratly archipelago as Beijing exercises its growing maritime power.

Washington’s move followed months of deliberation by the administration of President Barack Obama and could ratchet up tension in one of the world’s busiest shipping lanes and increase strains in U.S.-China relations.

A U.S. defense official said the Lassen also went within 12-mile limits of features in the disputed sea claimed by Vietnam and U.S. treaty ally, the Philippines. They said such “freedom-of-navigation” patrols were expected to become more frequent and were aimed at testing China’s territorial claims.

The U.S. destroyer sailed within 12 nautical miles of Subi Reef, an artificial island built up by China in the past year.

A Chinese guided-missile destroyer and a naval patrol ship shadowed and gave warnings to the U.S. warship “according to law,” China’s Defense Ministry said.

The U.S. patrol was a “coercive action that seeks to militarize the South China Sea region” and an “abuse” of freedom of navigation under international law, it added. U.S. Defense Secretary Ash Carter, testifying on Tuesday to the Senate Armed Services Committee, initially would only say the U.S. Navy had conducted operations in the South China Sea. But under questioning from lawmakers, he said the USS Lassen had passed within 12 miles of a Chinese artificial island.

“China will resolutely respond to any country’s deliberate provocations,” the ministry said in a statement that gave no details on precisely where the U.S. ship sailed.

Chinese Foreign Ministry spokesman Lu Kang told a daily briefing that if the United States continued to “create tensions in the region,” China might conclude it had to “increase and strengthen the building up of our relevant abilities.”

Lu did not elaborate, except to say he hoped it did not come to that, but his comments suggested China could further boost its military presence in the South China Sea.

In Washington, U.S. State Department spokesman John Kirby told a regular briefing that “Setting this aside, the U.S.-China relationship is vitally important and one we want to see continue to improve and to grow for the benefit of both our countries, not to mention the region.”

The U.S. defense official said the Lassen was followed at a safe distance by a Chinese ship and no incidents were reported during the 72-mile passage.

“I would expect that this becomes a regular operation in the South China Sea,” the official said. “This type of operation shouldn’t be seen as provocative.”

The official said the Lassen had been followed for weeks by Chinese vessels before the patrol.

Subi and nearby Mischief Reef were submerged at high tide before China began a dredging project to turn them into islands in 2014.

Under the U.N. Convention on the Law of the Sea, 12-nautical mile limits cannot be set around man-made islands built on previously submerged reefs.

Pentagon officials say the United States regularly conducts freedom-of-navigation operations around the world to challenge excessive maritime claims. The U.S. Navy last went within 12 miles of Chinese-claimed territory in the Spratlys in 2012.

China traveled within 12 nautical miles of the U.S. controlled Aleutian Island about six weeks ago, the defense official said. The White House says Washington has made clear to Beijing, even during last month’s visit by President Xi Jinping, that the United States would fly or sail anywhere that international law allows and stressed the importance of the South China Sea for commerce.

Asked on Tuesday about the patrol, White House spokesman Eric Schultz said he could not discuss details about military operations, but added: “Our freedom of navigation operations do not assert any specific U.S. rights.”

The patrol was carried out just weeks before a series of Asia-Pacific summits that Presidents Obama and Xi were expected to attend.

China claims most of the South China Sea, through which more than $5 trillion of world trade passes every year. Vietnam, Malaysia, Brunei, the Philippines and Taiwan have rival claims.

The Philippines, a vocal critic of China’s activities in the South China Sea, welcomed the U.S. action.

3. Why is China angry about the USS Lassen’s patrol?

4. a) What did China do in response to the Lassen’s patrol?
b) What warnings did the Chinese government issue to the U.S.?

5. How has the U.S. responded to China’s anger? Be specific.

6. Territorial waters extend 12 nautical miles from the shores of all countries. Why isn’t China supposed to set the 12 nautical mile boundaries around the artificial islands they recently built?

7. What did the White House say that officials have made clear to Beijing about U.S. patrols?

A range of security experts have said Washington’s freedom-of-navigation patrols would have to be regular to be effective, given Chinese ambitions to project power deep into maritime Southeast Asia and beyond.

“By using a guided-missile destroyer, rather than smaller vessels … they are sending a strong message,” said Ian Storey, of Singapore’s Institute of South East Asian Studies. “They have also said, significantly, that there will be more patrols – so it really now is up to China how it will respond.”

Some experts have said China would likely resist attempts to make such U.S. actions routine. China’s navy could for example try to block or attempt to surround U.S. vessels, risking an escalation.

Zhu Feng, executive director of the China Centre for Collaborative Studies of the South China Sea at Nanjing University, said he expected Beijing to limit its response as it ultimately did not want confrontation. “Both sides will be quite verbal but real actions, I hope, will show signs of exercising restraint,” Zhu said.

Washington worries that China has built up its outposts with the aim of extending its military reach in the South China Sea. China says they will have mainly civilian uses and undefined defense purposes.

Xi surprised U.S. officials after a meeting with Obama in Washington last month by saying that China had “no intention to militarize” the islands.

Even before that, however, satellite photographs had shown the construction of three military-length airstrips by China in the Spratlys, including one each on Subi and Mischief reefs. (from the Reuters article above)

In April 2015, Admiral Harry Harris Junior, the commander of the US Pacific Fleet, said at a conference:
“China is building artificial land by pumping sand on to live coral reefs – some of them submerged – and paving over them with concrete. China has now created over 1.5 square miles of artificial land mass. How China proceeds will be a key indicator of whether the region is heading toward confrontation or cooperation.” The creation of artificial islands on South China Sea reefs – something analysts say is intended to consolidate Chinese control of the region – is one of the most visible signs of an increasingly assertive foreign policy under Xi Jinping, the Chinese president. Watch a video about the artificial islands: