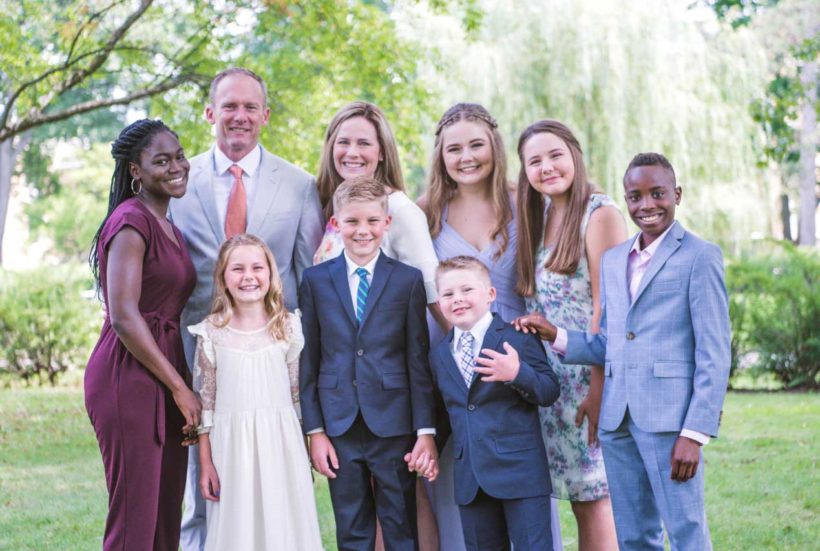 Supreme Court nominee Amy Coney Barret with her husband and their 7 children.

(Compiled from The Wall Street Journal with WKOW27) – President Trump formally nominated Amy Coney Barrett to the Supreme Court on September 26, kicking off what is expected to be a rapid confirmation process aimed at installing another conservative-leaning judge just weeks before Election Day.

The Senate Judiciary Committee has scheduled nomination hearings for Judge Barrett to begin Monday, October 12th at 9 a.m. ET and continue through Thursday, October 15th. (Watch the hearings next week at c-span.org.)

This comes as two Republican members of the Senate Judiciary Committee (Sens. Mike Lee of Utah and Thom Tillis of North Carolina) have tested positive for COVID-19, which has led to calls from Democrats to delay the proceedings.

“Judge Barrett’s hearings will begin one week from today. Chairman Graham has all the tools to conduct a hybrid hearing, just like the 150 others the Senate has held this year,” McConnell (R-Ky.) said on Twitter Monday evening.

Sen. Lindsey Graham (R-SC), chairman of the Senate Judiciary Committee, is scheduled to begin the hearings on his panel on Monday — a timeline that would allow a full Senate vote before the Nov. 3 election.

Judge Barrett, 48 years old, is a member of the Chicago-based Seventh U.S. Circuit Court of Appeals and a former law clerk for the late Justice Antonin Scalia. [She was] seen as a likely choice given her conservative credentials, strong support among Republican senators and the president’s desire to nominate a woman to succeed the late Justice Ruth Bader Ginsburg.

“Today it is my honor to nominate one of our nation’s most brilliant and gifted legal minds to the Supreme Court,” Mr. Trump said in the Rose Garden, with Judge Barrett at his side. “She is a woman of unparalleled achievement, towering intellect, sterling credentials and unyielding loyalty to the Constitution.”

Mr. Trump also said that if confirmed, Judge Barrett, who appeared with her husband and seven children, would be the first mother of school-age children to serve on the court. To her children he said, “thank you for sharing your incredible mom with our country.”

“This should be a straightforward and prompt confirmation,” Mr. Trump said. He asked Democrats to provide Judge Barrett with “the respectful and dignified hearing that she deserves.”

Senate Republicans, who hold a narrow majority, are preparing a fast-paced schedule to confirm the new justice by Nov. 3, a move many GOP lawmakers say is crucial in the case of delayed or disputed election results.

Judge Barrett said she was “truly humbled by the prospect of serving on the Supreme Court,” adding that “should I be confirmed I will be mindful of who came before me.”

When Judge Barrett had her first confirmation hearing in 2017 to serve on the Chicago-based federal appeals court, she stressed that a judge’s personal views should remain separate from his or her professional life.

“It’s never appropriate for a judge to impose that judge’s personal convictions, whether they derive from faith or anywhere else, on the law,” she told lawmakers on the Senate Judiciary Committee.

Compiled from two Wall Stree Journal reports with WKOW ABC27. Reprinted here for educational purposes only. May not be reproduced on other websites without permission.

NOTE: Before answering the questions, see “Background” and “Resources” below.

1. When will the Senate Judiciary Committee conduct nomination hearings for Amy Coney Barrett?

2. How did Senate Majority Leader Mitch McConnell respond to Democrats calls to postpone hearings due to two senators’ Covid-19 diagnosis?

3. What qualifications does Barrett have?

4. What will be a first if Amy Coney Barrett is confirmed?

5. What is Judge Barrett’s judicial philosophy? What did she say about it during the 2017 confirmation hearing to the federal appeals court?

6. Senate Republicans, who hold a narrow majority, have the votes to confirm Judge Barrett. Many GOP lawmakers say is crucial to confirm a 9th justice (as a replacement for Ruth Bader Ginsburg) in the case of delayed or disputed election results. Ask a parent: how necessary do you think this is? Please explain your answer.

7. Nominees customarily meet with individual senators prior to Senate Judiciary Committee confirmation hearings. Democrats say Barrett’s nomination is illegitimate and no justice should be nominated before January after the election. Four Democrats have refused to meet with Barrett. Senate Minority Leader Democrat Chuck Schumer stated that he would not meet with Trump’s nominee ahead the confirmation hearings. Sen. Schumer tweeted,

“I am not going to meet with Judge Barrett. Why would I meet with a nominee of such an illegitimate process and one who is determined to get rid of the Affordable Care Act?”

What do you think: should the opposing party refuse to meet with a president’s nominee? Explain your answer.

CHALLENGE: Watch the hearings next week at c-span.org. In a commentary at USA Today, Mary Vought writes:

During the 2017 confirmation hearings for her current appointment to the 7th Circuit Court of Appeals, Barrett faced harsh questioning from Judiciary Committee Democrats about her Catholic faith and beliefs.

Sen. Dick Durbin (D-Ill.) asked the nominee, “Do you consider yourself an orthodox Catholic?”

California’s Sen. Dianne Feinstein, the committee’s ranking Democrat, infamously said that “so many of us on this side have this very uncomfortable feeling” arising from Barrett’s faith, because “the dogma lives loudly within you.”

Article VI, Section 3 states that lawmakers and federal employees “shall be bound by Oath or Affirmation, to support this Constitution; but no religious test shall ever be required as a Qualification to any Office or public Trust under the United States.”

Democrats may disagree with Judge Barrett’s political views or even her judicial philosophy; they have every right to do so. But when they took their oath to uphold the Constitution, lawmakers, by definition, swore to disregard nominees’ religious beliefs. During the Barrett hearings, they should uphold their vow to the Constitution and to the American people.

During questioning, do you think Democratic senators unfairly brought Judge Barrett’s Catholic faith into questioning, or did they not mention it?

PROCEDURE FOR NOMINATING AND CONFIRMING FEDERAL AND SUPREME COURT JUDGES:

“One of the big confusions in the…Senate fight over the confirmation of judicial nominees is that this is an issue about ‘liberal’ judges versus ‘conservative’ judges.  The vastly more important issue is whether people who go into court should expect their cases to be decided on the basis of the law [textualist/constitutionalist/constructionist] or on the basis of the particular judge’s own philosophy [activist judges] …Liberals have rooted for judicial activism because this activism has favored liberal causes and liberal views on such issues as abortion, the death penalty, gay marriage, and racial quotas.  But activism can be used by any judge for any purpose.” Thomas Sowell, Hoover Institution

Watch the video of President Trump announcing Barrett as his nominee for Supreme Couet Associate Justice at the White House youtube page.

In Febuary 2016, when Republicans held the majority in the Senate with 54 seats, Democratic President Barack Obama called for a vote on his nominee to replace Justice Antonin Scalia, who had died suddenly a few days prior. This was in an election year. (Republicans currently hold a majority with 53 seats and they have the votes needed to confirm the president’s nominee.) Watch President Obama: