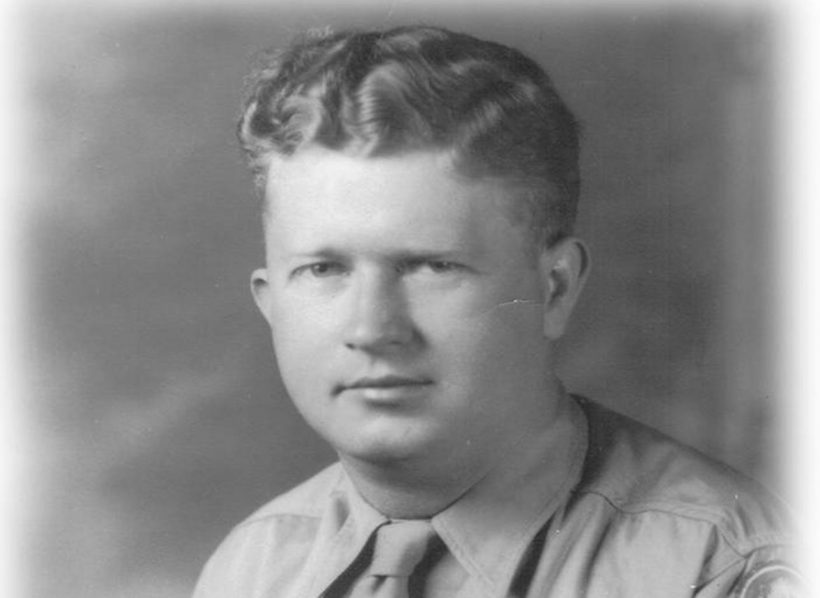 (CBSNews, courtesy of Yad Vashem via the Associated Press) JERUSALEM — The Nazi soldiers made their orders very clear: Jewish American prisoners of war were to be separated from their fellow brothers in arms and sent to an uncertain fate.

But Master Sgt. Roddie Edmonds would have none of that. As the highest-ranking noncommissioned officer held in the German POW camp, he ordered more than 1,000 Americans captives to step forward with him and brazenly pronounced: “We are all Jews here.”

He would not waver, even with a pistol to his head, and his captors eventually backed down.

Seventy years later, the Knoxville, Tennessee, native is being posthumously recognized with Israel’s highest honor for non-Jews who risked their lives to save Jews during World War II (“Righteous Among the Nations“). He’s the first American serviceman to earn the honor.

“Master Sgt. Roddie Edmonds seemed like an ordinary American soldier, but he had an extraordinary sense of responsibility and dedication to his fellow human beings,” said Avner Shalev, chairman of the Yad Vashem Holocaust museum and memorial. “The choices and actions of Master Sgt. Edmonds set an example for his fellow American soldiers as they stood united against the barbaric evil of the Nazis.”

It’s a story that remained untold for decades and one that his son, the Rev. Chris Edmonds, a Baptist pastor in Tennessee, only discovered long after his father’s death in 1985.

Edmonds was captured with thousands of others in the Battle of the Bulge in late 1944 and spent 100 days in captivity. His son vaguely knew about his father’s past from a pair of diaries Edmonds kept in captivity that included the names and addresses of his men and some of his daily thoughts.

But it was only while scouring the Internet a few years ago that he began to unravel the true drama that had unfolded – oddly enough, when he read a newspaper article about Richard Nixon’s post-presidency search for a New York home. As it happened, Nixon purchased his exclusive upper East Side town house from Lester Tanner, a prominent New York lawyer who mentioned in passing how Edmonds had saved him and dozens of other Jews during the war.

That sparked a search for Tanner, who along with another Jewish POW, Paul Stern, told the younger Edmonds what they witnessed on Jan. 27, 1945, at the Stalag IXA POW camp near Ziegenhain, Germany.

The Wehrmacht had a strict anti-Jew policy and segregated Jewish POWs from non-Jews. On the eastern front, captured Jewish soldiers in the Russian army had been sent to extermination camps.

At the time of Edmonds’ capture, the most infamous Nazi death camps were no longer fully operational, so Jewish American POWs were instead sent to slave labor camps where their chances of survival were low. U.S. soldiers had been warned that Jewish fighters among them would be in danger if captured and were told to destroy dog tags or any other evidence identifying them as Jewish.

So when the German camp commander, speaking in English, ordered the Jews to identify themselves, Edmonds knew what was at stake.

Turning to the rest of the POWs, he said: “We are not doing that, we are all falling out,” recalled Chris Edmonds, who is currently in Israel participating in a seminar for Christian leaders at Yad Vashem’s International School for Holocaust Studies.

With all the camp’s inmates defiantly standing in front of their barracks, the German commander turned to Edmonds and said: “They cannot all be Jews.” To which Edmonds replied: “We are all Jews here.”

Then the Nazi officer pressed his pistol to Edmonds head and offered him one last chance. Edmonds merely gave him his name, rank and serial number as required by the Geneva Conventions.

“And then my dad said: ‘If you are going to shoot, you are going to have to shoot all of us because we know who you are and you’ll be tried for war crimes when we win this war,'” recalled Chris Edmonds, who estimates his father’s actions saved the lives of more than 200 Jewish-American soldiers.

Witnesses to the exchange said the German officer then withdrew. Stern, who currently lives in Reston, Virginia, told Yad Vashem that even 70 years later he can “still hear the words.”

About 6 million European Jews were killed by German Nazis and their collaborators during World War II. The names of those honored for risking their lives to protect Jews are engraved along an avenue of trees at the Jerusalem memorial.

More than 26,000 have been designated “Righteous Among the Nations,” the most famous being Oskar Schindler, whose efforts to save more than 1,000 Jews were documented in Steven Spielberg’s 1993 film “Schindler’s List,” and Raoul Wallenberg, a Swedish diplomat who is credited for having saved at least 20,000 Jews before mysteriously disappearing.

But prior to Edmonds, only four were Americans, who belonged to the clergy or volunteered for rescue groups. He’s the first serviceman and the first whose actions saved the lives of fellow Americans. A ceremony for Edmonds is planned next year. And, thanks to his son’s efforts, Edmonds is now also being considered for a Congressional Medal of Honor.

Irena Steinfeldt, the director of the Holocaust Memorial’s Righteous Among the Nations Department, said all rescue stories were unique. She said Edmonds actions were reflective of those of a military man, who was prepared to take a quick, clear, moral decision.

“It’s a matter of five minutes and that is it. When he tells the German, ‘No,’ that is something that can kill him,” she explained. “It is something very dangerous that is happening in one moment. … But it is very heroic.”

1. How did the Nazis treat Allied Jewish soldiers differently than other POWs during WWII?

2. What were American soldiers warned to do about Jewish soldiers who were captured?

3. What does it mean to be designated “Righteous Among the Nations?”

4. For what actions is Master Sgt. Roddie Edmonds being posthumously recognized as “Righteous Among the Nations?”

5. What is unique about Sgt. Edmonds being awarded this honor?

6. How did Sgt. Edmonds’ son discover the story of his father’s heroism?

Yad Vashem is Israel’s official memorial to the victims of the Holocaust. Visit Yad Veshem’s Righteous Among the Nations page

Editorial from the NY Post, Dec. 2, 2015: “A fitting honor for US soldier who stood up to Nazis to save Jews”:

America’s military is known for its brave men and women who put their lives on the line for others — no matter their faith.

And there’s no better example than Master Sgt. Roddie Edmonds.

Edmonds risked his life when he stood up to Nazis and saved Jewish POWs during World War II. For that, he’s being posthumously given one of Israel’s highest honors, Righteous Among the Nations, an award for non-Jews who risk death to save Jews. He’s the first US serviceman to get the honor.

As the highest-ranking noncommissioned officer at a German POW camp, the Tennessee-born Edmonds was ordered to separate Jewish-American prisoners from the others. Doing so would’ve put their lives in jeopardy. But he refused, even as a gun was put to his head.

Instead, he declared: “We are all Jews here.” He also told the camp commander: “If you shoot me, you’ll have to shoot all of us, and after the war, you will be tried for war crimes.” The Nazis backed down.

Edmonds “seemed like an ordinary American soldier, but he had an extraordinary sense of responsibility . . . to his fellow human beings,” says Yad Vashem Holocaust museum Chairman Avner Shalev.

“These attributes form the common thread that binds members of this select group of Righteous Among the Nations,” he added. “The choices and actions of Master Sgt. Edmonds set an example for his fellow American soldiers as they stood united against the barbaric evil of the Nazis.”

A ceremony for Edmonds is planned next year. It couldn’t be more deserved.