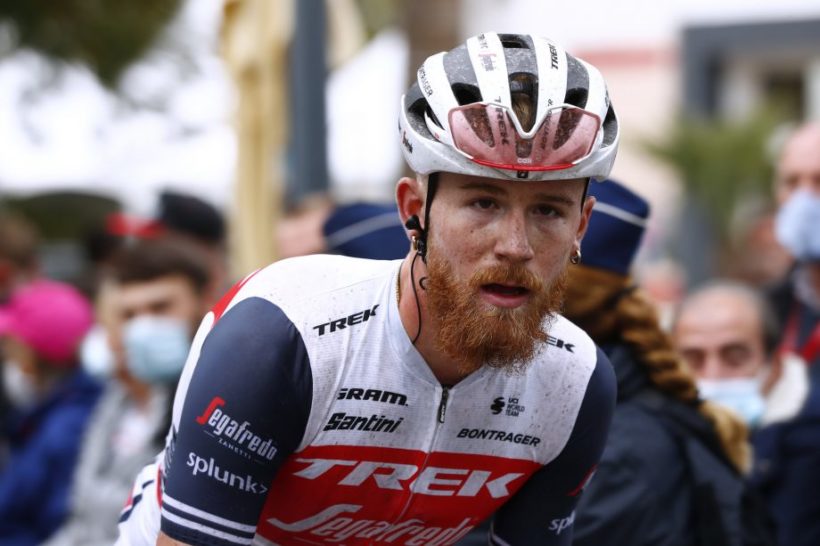 (by Jorge Fitz-Gibbon, New York Post) – An up-and-coming American cyclist has been suspended from his racing team for making comments in support of President Trump on Twitter that the team dubbed “divisive, incendiary, and detrimental.”

Quinn Simmons, 19, was taken out of action by the Trek-Seagredo team after [responding to] a Dutch journalist’s tweet Wednesday.

Simmons, who joined the World Tour team this year after winning the junior road world championship last year, came under fire after responding to an anti-Trump tweet by cycling journalist José Been.

“My dear American friends, I hope this horrible presidency ends for you,” Been posted. “And for us as (former?) allies too. If you follow me and support Trump, you can go. There is zero excuse to follow or vote for the vile, horrible man.”

When another user replied, “Apparently a Trumper,” Simmons came back with a post saying, “That’s right,” with a US flag symbol.

After the exchange, Trek-Segafredo released a statement explaining that Simmons, who is in his first year with the team, is suspended indefinitely.

“Trek-Segafredo is an organization that values inclusivity and supports more diverse and equitable sport for all athletes,” the team posted on Twitter. “While we support the right to free speech, we will hold people accountable for their words and actions.”

“Regrettably, team rider Quinn Simmons made statements online that we feel are divisive, incendiary, and detrimental to the team, professional cycling, its fans, and the positive future we hope to help create for the sport,” the statement said. “In response, he will not be racing for Trek-Segafredo until further notice.”

Been later deleted her original post and said she felt “horrible about the situation and terrible for @QuinnSimmons9 to miss his beloved classics.  To suspend him would never be my choice,” Been added. [She has since deleted her Twitter page, probably due to the controversy].

USA Today reported: Trek-Segafredo, an American team formerly known as RadioSchack-Nissan, later issued a second statement quoting Simmons as saying that he did not mean for the tweets to be offensive.

“To those who found the color of the emoji racist, I can promise that I did not mean for it to be interpreted that way,” Simmons said. “I would like to apologize to everyone who found this offensive as I strongly stand against racism in any form.

“To anyone who disagrees with me politically, that is fine. I won’t hate you for it. I only ask the same.”

The team added that Simmons “was not suspended because of his political views. He was suspended for engaging in conversation on Twitter in a way that we felt was conduct unbefitting a Trek athlete.”

Cycling Weekly reported: Simmons, from Durango, Colorado, rose to prominence last season with a number of victories in the junior ranks, which were capped off by a huge solo win in the junior World Championship road race.  At 18 years old, he was then signed to Trek-Segafredo for 2020 on a two-year neo-pro contract.

Published at nypost .com with Post wire services and USA Today. Reprinted here for educational purposes only. May not be reproduced on other websites without permission from the New York Post.

2. a) What was the text of Dutch cycling journalist José Been’s tweet?
b) How did Simmons reply?
c) Ms. Been was addressing the U.S. team. Was Simmons wrong to reply? Explain your answer.

3. What else did Simmons tweet that added to his team saying his exchange was “divisive, incendiary, and detrimental to the team…”?

5. How did the Dutch journalist react to Simmons’ suspension?

6. Some say Simmons is racist because he used a brown waving hand emoji. Simmons says he is not racist. He wrote: “To those who found the color of the emoji racist, I can promise that I did not mean for it to be interpreted that way. I would like to apologize to everyone who found this offensive as I strongly stand against racism in any form.”