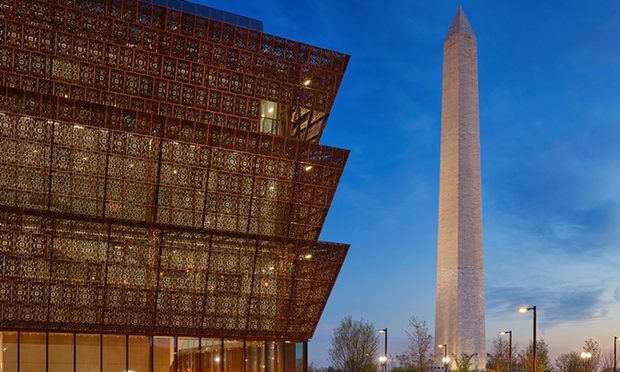 The Smithsonian National Museum of African American History and Culture (NMAAHC) sits in the shadow of the Washington monument. Two weeks from now, the museum opens in Washington D.C.(Photo: Alan Karchmer/NMAAHC)

(by Lee Cowan, CBS News) – …Music legend Quincy Jones, 83…has worked with the likes of Michael Jackson, and has 27 Grammys to his name, as well as an Oscar. But Jones’ latest task is pretty daunting.

He’s producing the dedication ceremony for the opening of the Smithsonian’s National Museum of African American History and Culture (NMAAHC).

The story he has to tell is nothing short of the tale of black America.

“The big challenge,” Jones chuckled, “is the ‘what, who, why,’ because there’s a big story to tell there.”

As many as 20,000 people are expected to descend on the Mall to watch President Obama cut the ribbon at the dedication ceremony on September 24th.

Jones is on the museum’s council, and has been working closely with founding director Lonnie Bunch to help collect items of both musical and cultural significance.

“There’s not a future without a good past, a good knowledge of the past,” Bunch said. “So that’s what we’re trying to do.”

“He’s had his fingers on sort of American culture for 60 years,” Bunch said. “I find myself pinching myself saying I’m sitting here with Quincy Jones — oh, my goodness!”

Bunch showed Jones a few of his “favorite little things,” including Sammy Davis Jr.’s tap shoes, “from when he was a baby.” … The lower floors present a darker tale — a segregated rail car; shackles used to enslave a child; and the casket of Emmett Till, the young boy whose lynching in 1955 helped spark the civil rights movement.

And there are the stools from a Woolworth’s lunch counter where black students were refused service, and so refused to leave.

But make no mistake, Bunch says: This is not (nor was it ever intended to be) the National Museum of Discrimination.

“For me, the African American experience is an experience not of tragedy, but of unbelievable belief — belief in themselves, belief in an America that often didn’t believe in them,” he said.

Which is why Quincy Jones makes such a valuable resource for Bunch. He, like so many others, have succeeded in the face of enormous obstacles.

“When you come from the bottom, you never forget it. Never,” Jones said.

He was born in Chicago in what he calls one of the biggest black ghettos in America. He lived for a time with his grandmother, a former slave, and — while touring the South with jazz great Lionel Hampton — experienced first-hand the sting of racism.

“We get to the biggest church in town, from the steeples of one of the big churches there, they had a rope and an effigy of a black dummy hanging off the top of the steeples,” Jones said. “You remember that to this day?” CBS’ Lee Cowan asked. “Hell, how you gonna forget that?” Jones replied.

By the 1950s he watched some of the greatest entertainers on the Las Vegas Strip being cheered on stage, but scorned off it: “Belafonte, Lena Horne, Sammy, they couldn’t even go into the casino. They had to eat in the kitchen. Getting $17,000 to star in a show, and go back to a black hotel on the other side of town.”

Few pushed and pulled harder to legislate a home for the museum than civil rights icon John Lewis. At the Ebenezer Baptist Church in Atlanta (where the Rev. Martin Luther King Jr. was pastor), Lewis said, “If you believe in something, you have to stand up and fight and push and pull.”

Lewis introduced a bill for the museum every year for almost 15 years, met with continued opposition. “There was just some feeling on the part of one or two,” Lewis said. “But there was one particular member, the late Senator Jesse Helms, each time the bill would come up in the Senate, he would put a hold on it. Every single time.”

It wasn’t until 2003 that President George W. Bush signed bipartisan legislation getting the ball rolling. But it would be another nine years before construction on the museum began….

Cowan asked Lewis, “What’s it going to be like for you walking through those doors the first time?”

“I don’t know,” he replied. “I’m going to try to hold it. But I’ll probably cry.  It is my hope that it will make America a better country, and make our people a better people.”

Perhaps it already has. …..

1. How is music legend Quincy Jones involved with the National Museum of African American History and Culture?

2. When is the dedication ceremony for this latest Smithsonian Museum to open?

3. a) Who is Lonnie Bunch?
b) According to Mr. Bunch, what is the museum NOT intended to be?
c) How does Mr. Bunch describe his view of the African American experience?

4. a) Define artifact.
b) How many artifacts are in the museum’s 11 galleries?
c) Describe the differing artifacts mentioned in this article.

5. a) In addition to Mr. Bunch, who else was instrumental/responsible for getting this museum commissioned?
b) Which president signed the legislation needed for this museum?
c) What is Mr. Lewis’ hope for the museum?

6. These men focus on how far we’ve come as a nation, and on the strength, optimism, perseverance and resilience African Americans have had. What is not mentioned in this article, but is well known, is the strong faith the African American community has in God.
When asked by someone in the book of Matthew, “which is the greatest commandment?” Jesus said to him, “You shall love the Lord your God with all your heart, with all your soul, and with all your mind. And you shall love your neighbor as yourself. On these two commandments hang all the Law and the Prophets.” What do you think would happen with race relations in America if everyone followed these commandments “love God…” and “love your neighbor as yourself”?

Lonnie G. Bunch III (born November 18, 1952) is an American educator and historian. He has spent much of his career as a history museum curator and administrator. He is the founding director of the Smithsonian’s National Museum of African American History and Culture. Bunch previously served as director of the Chicago History Museum (Chicago Historical Society) from 2000 to 2005.

Lonnie Bunch III was born in Newark, New Jersey, in 1952. He grew up in Belleville, New Jersey, where his family were the only African-Americans in their neighborhood. His grandfather, a former sharecropper, moved into the area as one of the first black dentists in the region, and Bunch’s father and mother were school teachers. As a child, he experienced racism from white teenagers in his neighborhood. Bunch credits his childhood experiences with local Italian immigrants and his reading of biographies as a youth with inspiring him to study history. Bunch wanted to give a voice to those who were “anonymous” or not written about. (read more of Mr. Bunch’s biography at wikipedia)

The National Museum of African American History and Culture is the only national museum devoted exclusively to the documentation of African American life, history, and culture. It was established by Act of Congress in 2003, following decades of efforts to promote and highlight the contributions of African Americans. To date, the museum has collected more than 36,000 artifacts. Nearly 100,000 individuals have become charter members of the museum. When the NMAAHC opens on September 24, 2016, it will be the 19th and newest museum of the Smithsonian Institution.

There are four pillars upon which the NMAAHC stands:

The NMAAHC is a public institution open to all, where anyone is welcome to participate, collaborate, and learn more about African American history and culture. In the words of Lonnie G. Bunch III, founding director of the NMAAHC, “there are few things as powerful and as important as a people, as a nation that is steeped in its history.”

from CBS News: Mr. Bunch says as much as 80 percent of the museum’s artifacts were donated by ordinary people who pulled them out of their basements, their attics or their churches. Each item in the museum’s collection tells a story — some of a tortured racial past, others of resiliency and optimism.