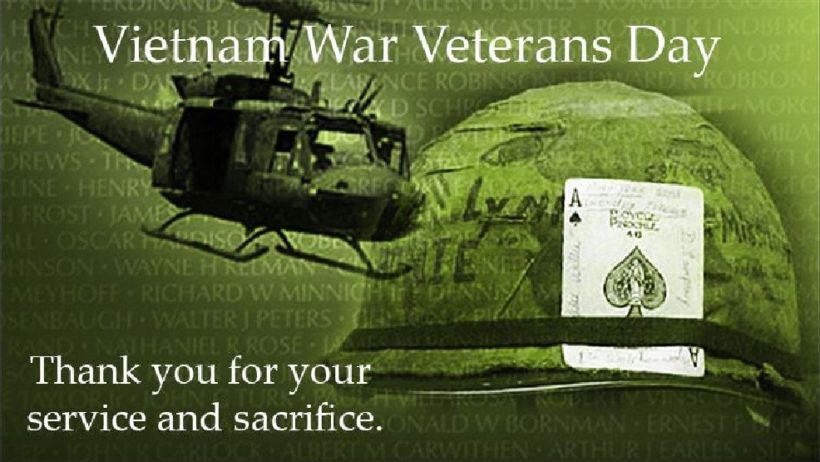 (by Sara Shayanian, UPI) — The U.S. Department of Defense on Thursday marked the first anniversary of National Vietnam Veterans Day — an observance introduced a year ago by President Donald Trump to honor veterans who felt alienated for years after the war [due to the disgraceful treatment they received from liberal anti-war Americans when they returned home after fighting bravely in Vietnam].

The Pentagon held a wreath-laying ceremony at the Vietnam Veterans Memorial in Washington, D.C. — honoring the veterans for the first time since President Trump signed the Vietnam War Veterans Recognition Act of 2017.

“We are proud to partner with the Department of Veterans Affairs in this endeavor,” Deputy Defense Secretary Patrick Shanahan said in a statement. “Today is an opportunity to honor all Vietnam veterans who served, and to recognize the families that stood alongside them.”

The department [was] joined Thursday by more than 11,000 organizations nationwide celebrating and honoring Vietnam veterans.

“During this commemoration of the 50th Anniversary of the Vietnam War, we embrace our responsibility to help our Vietnam veterans and their families heal from the heavy toll of war,” Mr. Trump said in a presidential proclamation.

“We remember the more than 58,000 whose names are memorialized on a black granite wall in our nation’s capital for having borne the heaviest cost of war.”

The Vietnam Veterans Memorial was dedicated in 1982 and chronologically lists the names of the servicemen and women who died and went missing in the conflict.

“I don’t think any other president would’ve had the nerve to do something like this,” Retired Army Maj. Rick Homer said of President Trump’s proclamation. “The only one I ever had any faith in was Ronald Reagan.”

2. How did the Pentagon commemorate Vietnam War Veterans Day?

3. What did Deputy Defense Secretary Patrick Shanahan say this day is for?

4. a) How many Americans served in the Vietnam War?  [between 1955 and 1975 – the Pentagon said it makes no distinction between veterans who served in-county, in-theater or were stationed elsewhere during the 20 years of the conflict].
b) How many of our troops died in Vietnam?

5. a) How many organizations across the country commemorated Vietnam War Veterans Day?
b) How did your community, county or state commemorate this day? (Do an internet search if you need to.)

Read an inspiring story: “Vietnam War Hero who blinked ‘torture’ in Morse code” (scroll to bottom of the post for the astonishing video)

Read a movie review of ‘Last Days in Vietnam’

Go to whitehouse.gov to read the “Presidential Proclamation Commemorating the 50th Anniversary of the Vietnam War”

Check out the list of events taking place around the country.