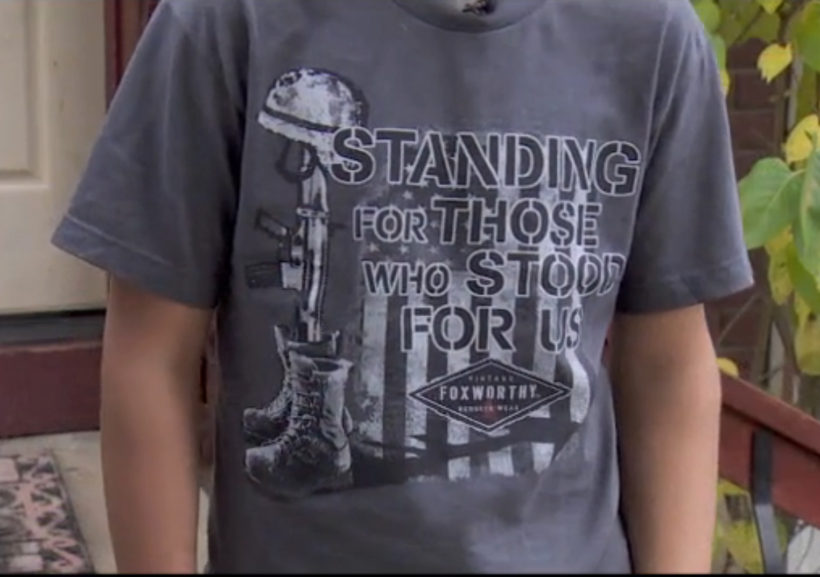 (by Stephen Mayer, KATU News) GRESHAM, Oregon — You don’t have to talk with eigth-grader Alan Holmes for very long to know that patriotism and support for the military are very important to him.

That’s in large part due to his older brother, who joined the Marines when he was just 19 and wound up serving abroad in Iraq.

Alan will never forget the day his big brother made it home safely.

“I was proud of him. I remember the day he came home and I was just so happy. I was little but I still remember it, he made me happy,” Alan said.

Ever since then Alan has tried to show his support for the troops, something he says he was doing when he wore a t-shirt with an image of the traditional soldier memorial (the Fallen Soldier Battle Cross), with a rifle, boots, and a helmet and bearing the words “Standing for those who stood for us,” to Dexter McCarty Middle School on Wednesday, Oct. 7.

But he says the principal spotted the shirt and gave him an ultimatum, switch shirts or face an in-school suspension. Alan didn’t back down.

“The principal, I asked him, is this considered a suspension? He said yes I’ll see you tomorrow and I left,” Alan said.

Alan still can’t understand why the image caused so much fuss.

“I was just upset. I was heartbroken. My brother, he means everything for me. Just being able to help and give back to the people who fought and died for us it just makes me feel good,” Alan said.

We checked the school dress code and it does bar students from wearing any clothes promoting alcohol, drugs, tobacco or violence.

Alan understands how people could be sensitive to images like that on his shirt given the recent school shooting, but he insists it isn’t a violent image. He says the image is being misinterpreted by school officials. “This isn’t relating the violence,” he said. “The barrel is pointing down. It’s total gun safety.”

The district refused to comment, citing student confidentiality requirements. They said only that weapons on a shirt are not appropriate in a school setting.

Reprinted here for educational purposes only. May not be reproduced on other websites without permission from KATU News. For the original article, visit KATU News.

2. Describe the t-shirt 8th grader Alan Holmes was not permitted to wear in school.

3. a) What ultimatum did the principal give Alan when he saw his shirt?
b) why was Alan not permitted to wear the T-shirt?

4. What comment did the school district make about the incident with Alan?

5. How did Alan defend his choice of T-shirt?

6. The school handbook specifically says “clothing with alcohol, tobacco, illicit drug and/or violence related references are prohibited.” Do you think the principal made the right decision regarding Alan’s t-shirt? Why or why not?

7. The following are several Facebook comments about Alan’s t-shirt. With which do you agree? Explain your answers:

CHALLENGE: Read about the Fallen Soldier Battle Cross image at wikipedia. Instead of punishing Alan because of a “zero tolerance” policy, how could the principal have turned the incident into a lesson for the school on the difference between guns used for violence vs. the gun in the Fallen Soldier memorial?