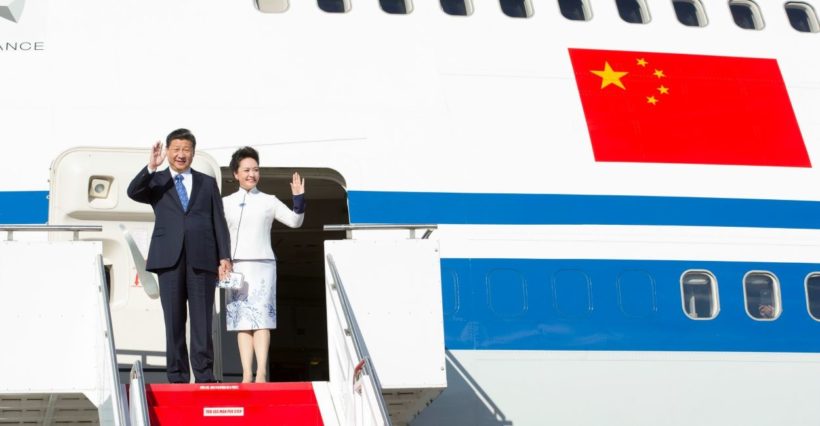 [NOTE:  Chinese President Xi Jinping arrived in Seattle on Tuesday to kick off his first state visit to the U.S.  Mr Xi will spend three days meeting business and technology leaders in Seattle, before heading to Washington for talks with President Barack Obama.]

(by Bruce Kennedy, CBSNews) — …China’s communist state-run China Daily newspaper said Chinese President Xi Jinping’s state visit to the U.S. should underscore the message that both Beijing and Washington are “committed to building a new model of major-country relationship based on non-confrontation, non-conflict, mutual cooperation and a win-win principle.”

But several major, hot-button issues have contributed to ongoing U.S.-China tensions, and those will likely be on the White House’s agenda during this week’s visit: Then-Attorney General Eric Holder said it was the first time charges were filed against a “state actor” for these types of online attacks. “For too long, the Chinese government has blatantly sought to use cyber-espionage to obtain economic advantage for its state-owned industries,” FBI Director James B. Comey added at the time.

And a 2013 Pentagon report directly attributed intrusions against U.S. government computer systems to the Chinese government and military.

China has denied the charges, and its government officials have called the allegations “groundless.”

But this past weekend came word that China and the U.S. are negotiating an unprecedented cyberspace arms-control accord. The agreement would bind each nation to not using cyberweapons during peacetime to harm each other’s critical infrastructure. (Read “Chinese hack of federal personnel files” from the Washington Post.)

A 2011 report by the U.S. International Trade Commission estimated that U.S. firms lost more than $48 billion in sales, royalties or licensing fees in China in 2009 due to intellectual property rights (IPR) infringements. It also said if IPR protections in China improved, U.S. employment could increase by 2.1 million jobs.

Last winter, at the Asia-Pacific Economic Cooperation CEO summit in Beijing, President Obama said the U.S. expected China “to become an innovative economy that values the protection of intellectual property rights, and rejects cybertheft of trade secrets for commercial gain.”

Lawmakers expect Obama to pressure his Chinese counterpart on IPR piracy. “President Xi’s visit presents an opportunity for diplomatic discussions on this important issue,” Rep. Suzan DelBene, D-Washington [said]. DelBene, who serves on the House Judiciary Committee, noted the president can establish sanctions against those responsible for such actions and “should act appropriately regarding the recent effort to pilfer the intellectual property of U.S. companies.”

China’s military buildup in the South China Sea — and especially its ongoing creation of artificial islands there for apparent military use — is worrisome to the U.S. and some Asian nations.

Beijing has laid claim to most of the South China Sea, despite similar claims from the Philippines, Vietnam, Malaysia, Brunei and Taiwan.

China is also involved in a territorial dispute with our ally Japan over a group of uninhabited islands north of Taiwan in the East China Sea, which has led to some ramming incidents between Chinese and Japanese vessels in recent years.

Japan’s parliament recently voted to allow its military to fight overseas for the first time since World War II, further raising concerns that growing tensions among the regional rivals could trigger a confrontation.

According to the Council on Foreign Relations, about half of global oil tanker shipments pass through the South China Sea, and region is home to five of the world’s top 10 ports….

The not-yet-finalized Trans-Pacific Partnership (TPP) is a major free-trade agreement between 12 Asia-Pacific countries, including the U.S. The nations involved in it represent around 40 percent of the world’s GDP, 30 percent of global exports and a quarter of global imports.

Seen as part of the Obama Administration’s “pivot” toward Asia, the White House says it will use the TPP to renegotiate NAFTA (North American Free Trade Agreement) and to “help level the playing field for workers and businesses here at home by ensuring our trade partners are playing by the rules.”

China, however, isn’ part of the TPP, and this has been another sticking point in Beijing’s relations with the U.S. Chinese media has called the TPP an “attempt to squeeze China out of the main discussions on Asian trade agreements.” In response, Beijing is helping to set up a separate Asian free-trade zone, the Regional Comprehensive Economic Partnership (RCEP), which notably excludes the U.S.

This year has [been bad] for China’s economy, the second largest in the world behind the U.S. Along with its recent stock market meltdown, Chinese growth has been slowing more rapidly than expected. [The Chinese government this summer devalued its currency, which had a negative effect around the world.]…

When it comes to several of the major international issues of the day, many experts are hoping Beijing and Washington can come to some sort of terms and end up sharing some diplomatic common ground. Those issues include the growing chaos and terrorism in the Middle East, the Russia-Ukraine crisis, Iran’s nuclear program and perhaps even relations between China and Taiwan.

“With Washington dealing with a Middle East marked by chaos and an Eastern Europe facing Russian belligerence, President Obama does not want to see the U.S.-China relationship develop into a third front of tensions,” the Brookings Institution’s Jeffrey Bader, a former White House national security specialist, wrote recently. “A sharing of strategic perspectives that reveals a common or at least parallel approach to maintaining global stability should help prevent that.”

1. a) Define cyber espionage and cyber hacking.
b) What is significant about the charges the U.S. government filed against China last year?
c) What accusation did FBI Director James Comey make regarding cyber attacks made by the Chinese government against the U.S.?

2. a) What deal is the U.S. negotiating with China regarding the cyberhacking?
b) Do you think the Chinese government can/should be trusted to hold up their end of the agreement? Explain your answer.

3. a) Define intellectual property, IPR, infringement and piracy.
b) What did a 2011 report by the U.S. International Trade Commission conclude?
c) What action does Democratic Rep. Suzan DelBene suggest President Obama take to address this crime permitted/committed by the Chinese government?

4. Read “A ‘State Visit’ for China’s President Sends All the Wrong Signals” under “Background” below the questions. Since U.S. and Chinese goals for the state visit between President Obama and President Xi are different, what should the Obama administration’s aim be?

5. a) What is the difference between a state visit, an official visit and a working visit, according to U.S. protocol?
b) Why does the commentator suggest that a working visit would have been the best option for the U.S.?
c) Do you agree with this assertion? Explain your answer.
d) Ask a parent the same question. Were you surprised by his/her response? Why or why not?

It is certainly appropriate for President Obama to meet with President Xi Jinping in order to manage the differences between the U.S. and China and to explore areas of cooperation. There is too much at stake in a relationship between the world’s two largest economies, and we have too many potentially dangerous disagreements, not to be talking with each other.

But a lavish “state visit” is not the way to accomplish American policy goals.

In addition to the massive hack on the Office of Personnel Management revealed this summer, China has continued its aggressive behavior in the East and South China Seas, and has intensified its crack down on civil and political rights at home.

From an American perspective, effectively addressing these problem areas ought to be the aim of the visit. The Chinese, however, have different goals in mind. For the Chinese, the visit itself is the message.

The celebration of U.S.-China relations in Washington will send a powerful message back to Beijing and to other Asian capitals that the Obama administration is actually pleased with where relations are headed, despite the obvious slights to American interests.

In fact, the trip is already being spun by Chinese officials as supporting Xi’s policy of building a “new model of major country relations,” a Chinese policy formulation that may carry more baggage than the Obama administration first assumed.

In short, the state visit will help Xi achieve his policy ends; it will not do much for the U.S.

What Other Options Did the Obama Administration Have?

According to “United States Protocol: The Guide to Diplomatic Etiquette,” three types of visits were at the president’s disposal.

A “working visit” for Xi would have carried all the same low expectations for progress on American foreign policy goals, but it would have avoided the appearance that all is well in the relationship. It would have sent the clear signal to Asia that although we are prepared to talk through our many differences, the U.S. is determined to lead, not accommodate the Chinese lead and its associated bad behavior.