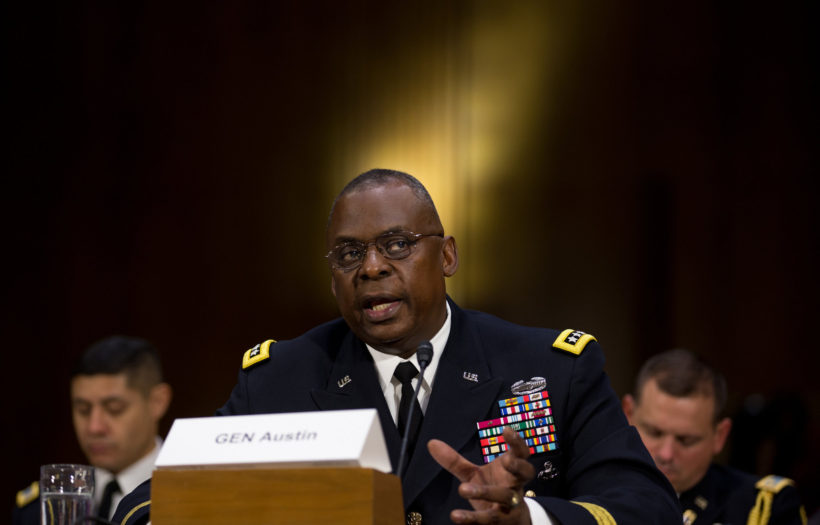 (by Shane Harris and Nancy A. Youssef, The Daily Beast) — More than 50 intelligence analysts working out of the U.S. military’s Central Comman (CENTCOM) have formally complained that their reports on ISIS and al Qaeda’s branch in Syria were being inappropriately altered by senior officials, The Daily Beast has learned.

The complaints spurred the Pentagon’s inspector general to open an investigation into the alleged manipulation of intelligence. The fact that so many people complained suggests there are deep-rooted, systemic problems in how the U.S. military command charged with the war against the self-proclaimed Islamic State assesses intelligence.

“The cancer was within the senior level of the intelligence command,” one defense official said.

Two senior analysts at CENTCOM signed a written complaint sent to the Defense Department inspector general in July alleging that the reports, some of which were briefed to President Obama, portrayed the terror groups as weaker than the analysts believe they are. The reports were changed by CENTCOM higher-ups to adhere to the administration’s public line that the U.S. is winning the battle against ISIS and al Nusra, al Qaeda’s branch in Syria, the analysts claim.

That complaint was supported by 50 other analysts, some of whom have complained about politicizing of intelligence reports for months. That’s according to 11 individuals who are knowledgeable about the details of the report and who spoke to The Daily Beast on condition of anonymity.

The accusations suggest that a large number of people tracking the inner workings of the terror groups think that their reports are being manipulated to fit a public narrative. The allegations echoed charges that political appointees and senior officials cherry-picked intelligence about Iraq’s supposed weapons program in 2002 and 2003.

The two signatories to the complaint were described as the ones formally lodging it, and the additional analysts are willing and able to back up the substance of the allegations with concrete examples.

Some of those CENTCOM analysts described the sizeable cadre of protesting analysts as a “revolt” by intelligence professionals who are paid to give their honest assessment, based on facts, and not to be influenced by national-level policy. The analysts have accused senior-level leaders, including the director of intelligence [James Clapper] and his deputy in CENTCOM, of changing their analyses to be more in line with the Obama administration’s public contention that the fight against ISIS and al Qaeda is making progress. The analysts take a more pessimistic view about how military efforts to destroy the groups are going. The large number of analysts who complained to the Pentagon inspector general hasn’t been previously reported. Some of them are assigned to work at CENTCOM, the U.S. military’s command for the Middle East and Central Asia, but are officially employed by the Defense Intelligence Agency.

The complaints allege that in some cases key elements of intelligence reports were removed, resulting in a document that didn’t accurately capture the analysts’ conclusions, sources familiar with the protest said. But the complaint also goes beyond alleged altering of reports and accuses some senior leaders at CENTCOM of creating an unprofessional work environment. One person who knows the contents of the written complaint sent to the inspector general said it used the word “Stalinist” to describe the tone set by officials overseeing CENTCOM’s analysis.

Many described a climate in which analysts felt they could not give a candid assessment of the situation in Iraq and Syria. Some felt it was a product of commanders protecting their career advancement by putting the best spin on the war.

Some reports crafted by the analysts that were too negative in their assessment of the war were sent back down the chain of the command or not shared up the chain, several analysts said. Still others, feeling the climate around them, self-censored so their reports affirmed already-held beliefs.

“While we cannot comment on the specific investigation cited in the article, we can speak to the process. The Intelligence Community routinely provides a wide range of subjective assessments related to the current security environment. These products and the analysis that they present are absolutely vital to our efforts, particularly given the incredibly complex nature of the multi-front fights that are ongoing now in Iraq and Syria,” said Air Force Col. Patrick Ryder, U.S. CENTCOM spokesman. “Senior civilian and military leadership consider these assessments during planning and decision-making, along with information gained from various other sources, to include the insights provided by commanders on the ground and other key advisors, intelligence collection assets, and previous experience.”

Two of the officials who spoke to The Daily Beast said that analysts began airing their complaints in October in an effort to address the issue internally and only went to the inspector general when that effort failed. Some of those who complained were urged to retire, one official familiar with the report told The Daily Beast. Some agreed to leave.

In recent months, members of the Obama administration have sought to paint the fight against ISIS in rosy hues—despite the terror army’s seizure of major cities like Mosul and Fallujah.

“I am confident that over time, we will beat, we will, indeed, degrade and ultimately destroy ISIL,” Secretary of State John Kerry said in March, using the government’s preferred acronym for the group.

“No, I don’t think we’re losing,” President Obama said in May.

Yet a growing group of intelligence analysts persisted with their complaints. For some, who have served at CENTCOM for more than a decade, scars remained from the run-up to the 2003 war in Iraq, when poorly written intelligence reports suggesting Iraq had weapons of mass destruction, when it did not, formed the basis of the George W. Bush administration’s case for war.

“They were frustrated because they didn’t do the right thing then” and speak up about their doubts on Iraq’s weapons program, the defense official told The Daily Beast.

Note: This article was first published September 9, 2015 at The Daily Beast website. Reprinted here for educational purposes only. May not be reproduced on other websites without permission from The Daily Beast. Visit the website at thedailybeast .com.

2. What was the result of the intelligence analysts’ complaint?

3. How/why were the intelligence analysts’ reports changed? Be specific.

4. Two senior analysts originally signed the complaint. How many others supported their complaint?

5. a) What are these CENTCOM intelligence analysts paid to do?
b) Who did the analysts accuse of changing their analysis?

6. In addition to changing their reports, what compliant do analysts have about the officials who oversee CENTCOM’s analysis department?

7. a) How did the analysts initially lodge their complaints?
b)What did they do when their efforts failed?
c)What happened to some of the analysts who complained?

8. How do the reporters describe the Obama administration’s portrayal of the U.S.’s fight against ISIS?

From wikipedia:  The Director of National Intelligence (DNI) is the United States government official – subject to the authority, direction, and control of the President – required by the Intelligence Reform and Terrorism Prevention Act of 2004 to:

The 9/11 Commission recommended to establish the DNI position in their 9/11 Commission Report not released until July 22, 2004, as they had identified major intelligence failures that called into question how well the Intelligence Community was able to protect U.S. interests against foreign terrorist attacks.