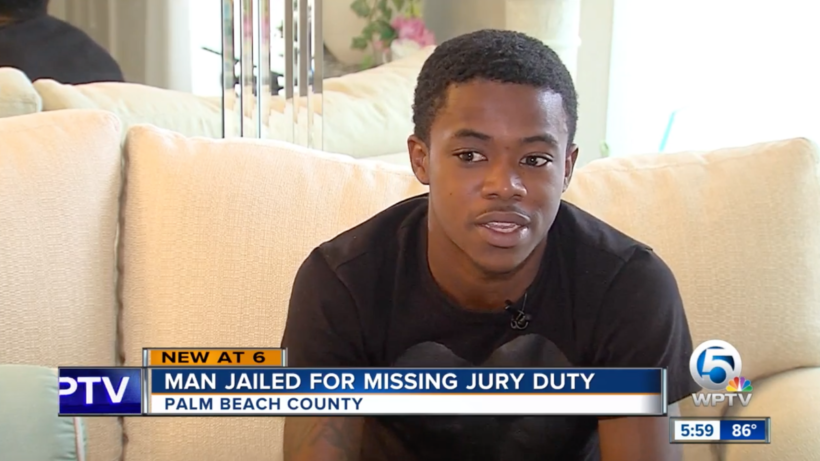 (Compiled from reports at NBC, ABC, AP and Click Orland0) WEST PALM BEACH, Fla. – A Florida man who failed to report to jury duty in August because he overslept and missed the trial was sentenced to a 10-day jail sentence.

WPTV reports that Deandre Somerville, 21, failed to attend a civil case trial the day after being sworn in as a juror. Somerville had received his first ever summons for jury duty over the summer. He described it as a little intimidating and a little boring. After a long day of sitting and waiting, Somerville said he was picked to serve as a juror  and was told to return the following day at 9 a.m.

But he missed his alarm and woke up around 11 or 11:30 a.m. It was almost time to head to his afternoon job so he didn’t bother going to the courthouse or calling the bailiff. He just hoped it would all just work out.

“At work, I was looking on my phone thinking, ‘What’s the worst case scenario that could happen?’ I thought maybe I would get a fine or something like that,” Somerville said in a phone interview.

The trial was delayed for almost an hour while the court tried to reach him. Because they were unable to do so, and he did not alert the jury office of his situation, Somerville was served a subpoena to appear before a judge a month later on September 23. He was asked to explain to Palm Beach County Circuit Judge John S. Kastrenakes why he did not appear in court that day as a juror.

“I said, ‘Sir, honestly, I overslept, and I didn’t understand the seriousness of this.’ He asked me if I had a criminal record. I said, ‘Sir, I’ve never been arrested,'” Somerville told WPTV.

The judge found Somerville in criminal contempt of court.

“When a juror is selected and sworn, the administration of justice in this courthouse depends on you following the orders of the court,” Kastrenakes said, according to court records, adding that the trial was delayed for almost an hour while the court waited for Somerville.

Kastrenakes initially ordered a sentence of 10 days in jail, one year of probation and 150 hours of community service. Somerville was also required to write a letter of apology to the court and pay $223 to cover court costs.

At a hearing on Friday, Somerville read his letter of apology aloud to the court.

“This was an immature decision that I made and I paid for with my freedom,” the letter read. “I am extremely sorry for my actions. I also sincerely apologize for delaying the trial by 45 minutes and not being considerate of other people’s time.”

At the hearing, Judge Kastrenakes reduced Mr. Somerville’s probation from 12 months to three months, and community service from 150 to 30 hours.

Kastrenakes also said he would drop the contempt of court conviction from his record if he met the conditions of his probation.

For community service, Somerville must give weekly 10-minute talks to jurors about the importance of jury duty. Each appearance will count for three hours of service.

Kastrenakes declined to comment about the case to ABC News, citing privacy laws, but said he wished he could speak “because I don’t think everybody got the facts right.”

“I just use it as a lesson learned,” Somerville told reporters at the courthouse Friday. “I had to get punished. I should have came back. I take it as a learning experience.”

As for his time in jail, Somerville said he “didn’t feel comfortable at all.”

2. What did Deandre Somerville do after he realized he overslept and missed jury duty?

3. a) Contempt of court, often referred to simply as “contempt”, is the offense of being disobedient to or disrespectful toward a court of law and its officers in the form of behavior that opposes or defies the authority, justice and dignity of the court.
What is criminal contempt of court vs civil contempt of court?
b) What sentence did the judge give Mr. Somerville after he found him guilty of contempt of court?

4. For what reason did the judge give Mr. Somerville this sentence?

5. How did the judge reduce Mr. Somerville’s sentence on Friday?

6. Why is it important for jurors to act responsibly?

a) It was reported that the court held up the trial for almost an hour while trying to reach Mr. Somerville when he didn’t show up. But no news article explained why the court couldn’t reach him. (Did he see the phone calls and ignore them? Did they have his correct phone number? …) It’s not just that he overslept and they replaced him with a different juror. He had been approved by the plaintiff and defendant in the case. The court did not know why he was absent. There is court procedure that must be followed.
Do you think the judge ruled too harshly in sentencing 21-year-old Deandre Somerville to 10 days in jail, etc.? Explain your answer.

b) Would your answer to a) be different if Somerville was a 40 or 50 year-old man? Explain your answer. Should it be?

c) What lesson do you learn from Deandre Somerville’s story?