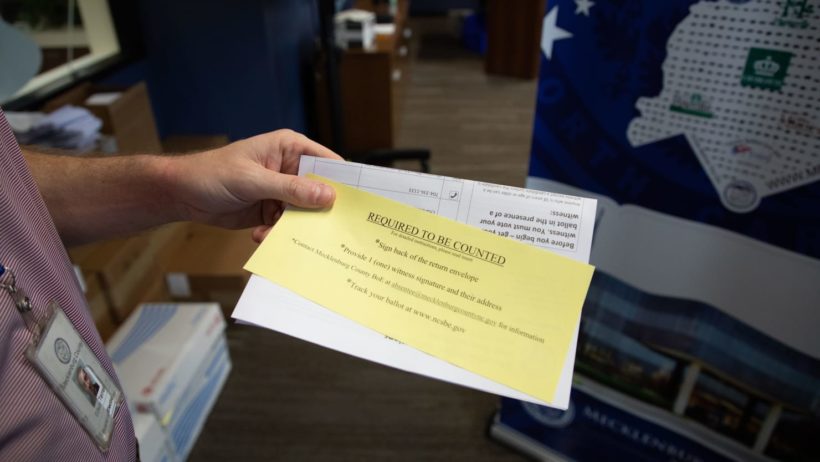 (by Mark Niesse, The Atlanta Journal-Constitution) — Secretary of State Brad Raffensperger announced Tuesday that about 1,000 Georgians face investigation for voting twice in the state’s June 9 primary, a large-scale allegation of fraud eight weeks before Election Day.

These voters returned absentee ballots and then also [voted] at polling places on election day, Raffensperger said. Double-voting is a felony in Georgia.

“A double-voter knows exactly what they’re doing, diluting the votes of each and every voter that follows the law,” Raffensperger said during a press conference at the state Capitol. “Those that make the choice to game the system are breaking the law. And as secretary of state, I will not tolerate it.”

The investigation follows a…primary where record numbers of voters cast absentee ballots during the coronavirus pandemic. Some voters who weren’t sure whether their absentee ballots would be received before election day decided to vote in person to ensure their votes would count.

Voters are allowed to cancel their absentee ballots and then vote at polling places as long as their ballots haven’t yet been received by election officials. It’s unclear whether the voters under investigation attempted to do so. …

Raffensperger said suspected double-voters are responsible because they knew they had returned an absentee ballot but then proceeded to vote at a precinct. …..

Double-voting is punishable by one to 10 years in prison and a fine up to $100,000. The Georgia attorney general’s office and local prosecutors will decide whether to bring charges following investigations on a case-by-case basis, Raffensperger said.

In all, about 150,000 people who requested absentee ballots showed up at polling places on election day, often because they never received their absentee ballots in the mail or decided to instead vote in person. Those voters’ absentee ballots were supposed to be canceled, but that didn’t always happen.

About 1,000 voters in 100 counties both returned absentee ballots and were then allowed to vote in person, Raffensperger said. …

About 60% of the double-voters who cast partisan ballots requested Democratic Party ballots, according to the secretary of state’s office. The remaining 40% used Republican Party ballots. Nonpartisan ballots weren’t included in the calculation. A list of voters who allegedly cast two ballots wasn’t disclosed because the case is under investigation.

Double-voting didn’t change the outcome of any races, Raffensperger said.

At least one voter has admitted he intentionally voted twice to show it could be done. The Long County voter, Hamilton Evans, told Fox 5 Atlanta last week that he wanted “to prove a point.”

… Absentee voting fraud has been rare in recent years in Georgia, according to a review of State Election Board records by The Atlanta Journal-Constitution.

But Raffensperger said the sharp increase in absentee voting this year increased the opportunity for double-voting.

“It is clear that rather than do his job of promoting the safety and security of our voting process, the secretary of state is instead pushing the GOP’s voting conspiracy theories and disinformation,” Hogan said. …..

Published at ajc .com. Reprinted here for educational purposes only. May not be reproduced on other websites without permission from The Atlanta Journal-Constitution.

2. What are those being investigated alleged to have done?

3. Voter fraud is a felony in many states including Georgia. What is the potential punishment in Georgia for those found guilty?

4. a) How are some voters in Georgia legally allowed to “vote twice”?
b) How does the reporter explain why at least some of those being investigated — presumably people he interviewed — voted twice?

5. How many people who requested absentee ballots never mailed them in and instead just voted in person?

6. How is Secretary of State Raffensperger conducting the investigation of the 1,000 voters?

7. What percentage of those being investigated are Republicans and what percent are Democrats?

8. Read the “Background” and watch a clip from Secretary Raffensperger’s press conference under “Resources.” What do you think:
Scott Hogan, the Executive Director of Georgia’s Democratic Party said fraud continues to be rare in Georgia elections. He said of Mr. Raffensperger, who is a Republican: “It is clear that rather than do his job of promoting the safety and security of our voting process, the secretary of state is instead pushing the GOP’s voting conspiracy theories and disinformation.”
President Trump, U.S. Attorney General William Barr and Republicans in general are concerned with the potential for voter fraud, while Democrats generally dismiss these fears as unfounded. What do you think? Is it possible? And would this occur in larger numbers in Democrat-controlled states? Or are Republicans making something out of nothing – and/or do the “insignificant” numbers of those potentially caught committing voter fraud make it not worth being concerned over? Explain your answer.

Double voting is often listed as a felony in states, and can come with hefty fines or jail time.

Most commonly, states prohibit voting more than once “in the same election.” In summary:

Read details for each state at the National Conference of State Legislatures website.

Georgia’s top elections official, Secretary of State Brad Raffensperger, said Tuesday that his office has identified about 1,000 cases of double voting in the June primary election: