Free Trump and Kim haircuts ahead of summit 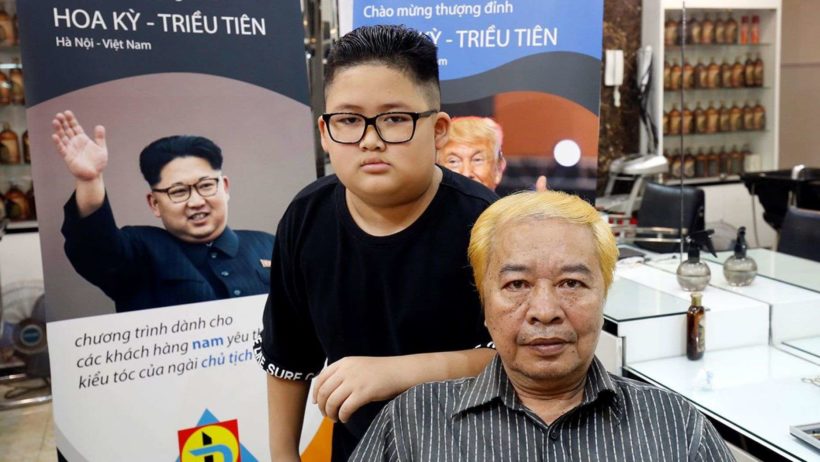 (by Aris Folley, The Hill) – A barber in Vietnam is offering free haircuts to people who wish to copy President Trump’s or North Korean leader Kim Jong Un’s distinctive hairstyles ahead of their upcoming second summit.

The Tuan Duong Beauty Academy in Hanoi will be offering the promotion from now until Feb. 28 in honor of the nuclear disarmament meeting between Trump and Kim scheduled to take place on Feb. 27 and 28, according to Reuters.

Le Tuan Duong, the owner of the salon, told Reuters he was initially offering the promotion “for fun” but was later “surprised at how people have responded.”

“I love peace. I hate war so much. So many people in my family have died, so I support this summit very much,” said Duong. The outside of Tuan Duong Beauty Academy where the Kim Jong un and Donald Trump haircut promotion is taking place. (Reuters)

Le Phuc Hai told Reuters he was sitting at a lake nearby when he was approached by Duong for a haircut.

Hai said he agreed to the offer out of curiosity shortly after, saying: “I’m not afraid of this bright orange hair color because after this promotional campaign, the hair salon owner said he would return my hair to normal.”

“I like Donald Trump’s haircut. It looks great and it fits my age,” the 66-year-old man continued.

Nine-year-old To Gia Huy also said he was happy with his free haircut.

“I feel happy with this haircut because people will think I look like the leader of North Korea,” he.

Huy said he was also confident he’d be the only kid in his class able to pull off the look, telling Reuters: “No one in my class is as fat as me.”