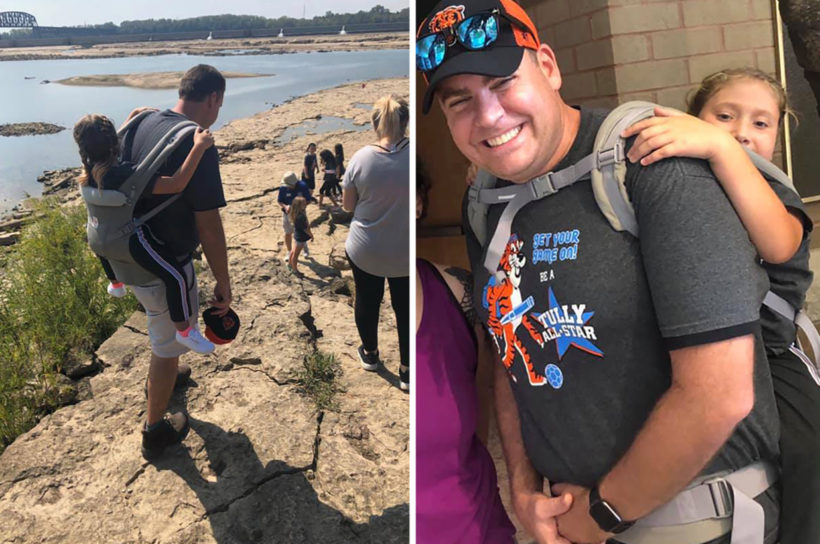 (By Ben Cost, NY Post) – When a wheelchair-bound schoolgirl couldn’t attend a field trip due to her disability, a kind-hearted teacher saved the day by carrying her the whole way on his back.

Ryan Neighbors, a 10-year-old student at Tully Elementary School in Louisville, Ky., suffers from spina bifida, a birth defect that occurs when the spine and spinal cord don’t form properly. The disability left her paralyzed from the waist down, making it impossible for her to attend school trips that aren’t wheelchair-accessible.

When the time came for the school hiking trip to the Falls of the Ohio State Park, her mother, Shelly King, thought she’d have to miss out on the fun yet again.

Fourth-grade teacher Jim Freeman decided he wasn’t going to allow that to happen. He offered to carry her — a gesture King said “came out of the blue,” as Freeman wasn’t her teacher and hadn’t even interacted with her much up to that point.

Freeman made good on his word. Like a human steed, he strapped all 55 pounds of her to his back, giving her a piggyback ride for the entire length of the hourlong hike while he scrambled over rocks and fossil beds, reports USA Today. His special jockey wasn’t the least bit apprehensive about the hike, saying, “This is the part I’ve been waiting for” when she was strapped in, Freeman told News 9.

“When I got to see the fossils and stuff I was like, ‘Wow, that’s, like, really cool,’ ” Neighbors says in the video. “I haven’t got to see that before!”

Shelly King was moved to tears by the selfless act, saying, “He isn’t even Ryan’s teacher, and he was so pure-hearted that he wanted to make sure she was included and not left out.”

King posted photos of Freeman’s deed on Facebook Friday, where they’ve garnered more than 3,500 reactions and 1,700 shares, as well as an outpouring of support for the good samaritan teacher. “You are wonderful,” said one commenter. “Been reading all week about special needs students being mistreated. So happy to know there are schools and teachers who care so much for their students.”