Student spent 24 hours in a trench for school project 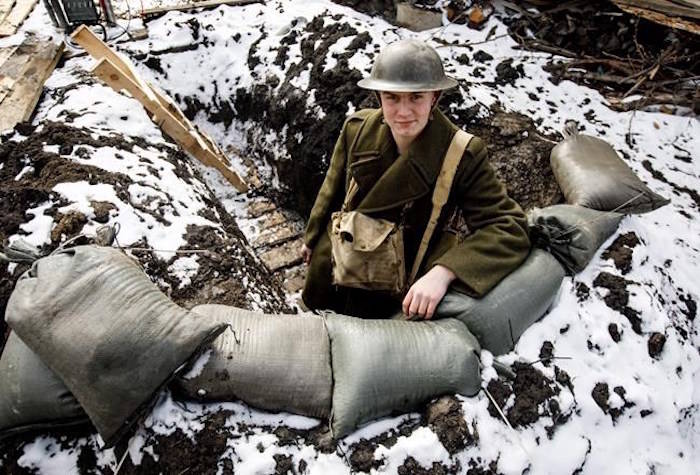 High school student Dylan Ferris pictured in the trench he built in his backyard, in Edmonton Alta, on Thursday March 29, 2018. Ferris is spending 24 hours in a muddy trench in his parent’s yard, all for a social studies project. (The Canadian Press/Jason Franson)

(by Rob Drinkwater, The Canadian Press, March 30, 2018)  EDMONTON, CANADA — Dylan Ferris decided to dig a little deeper for his high school social studies project, which he’s dedicated to the lives of soldiers in the First World War.

Ferris isn’t just writing a report. The 15-year-old has built a trench in his backyard complete with sandbags, has borrowed a replica uniform and is even sleeping below ground in freezing temperatures.

The idea is to recognize the ordeal soldiers faced and understand the sacrifices they made.

As an air cadet, Ferris visited the Canadian National Vimy Memorial in France last year for a ceremony to mark the 100th anniversary of the Battle of Vimy Ridge.

But getting his mother to agree to a trench in the yard wasn’t easy. His chief tactic, he explained, was to propose even more outlandish and dangerous projects so the trench would seem tame by comparison.

Among them was a home-built airplane. A flame-thrower was another idea he pitched.

Next, he had to excavate the dirt. The ground was frozen solid, so help was required from a family friend with a propane heater. Together, they used tarps and pallets to construct a covering to make the ground soft enough to dig.

For the clothes, the Loyal Edmonton Regiment Museum loaned Ferris a uniform from the First World War that they allow museum visitors to try on.

Even with the cold temperatures there’s mud everywhere — on the steps to his house, on the landing and in the garage. Ferris cleans it up, but everything quickly gets dirty again.

It’s spring break from school right now and Ferris said his plan is to attempt 24 continuous hours in his trench.

He spent six hours in it Sunday night, bundled in a vintage sleeping bag and using a sandbag as a pillow. His friend slept nearby in a camper van, and for added authenticity, lobbed mudballs at Ferris to encourage him to keep his head down.

Ferris said he enjoys reading in the trench during the day. But he said it’s eerie at night, giving him a glimpse of what soldiers endured a century ago.

“I don’t think it can be truly representative, but when I was in there, there’s a lot of truth to the war songs, ’Oh, I want to go home,’ and ‘Long Way to Tipperary,’” he said.

“It’s cold, it’s wet, it’s miserable and, you know, the house is right there. It’s just a longing for home, I guess. Even when it’s right there.”

Ferris said he hopes to get a good mark on his project. He may even still build an airplane this summer.

“I think the trench will stay there until my mum says I want my vegetable garden back and I have to fill it in.”