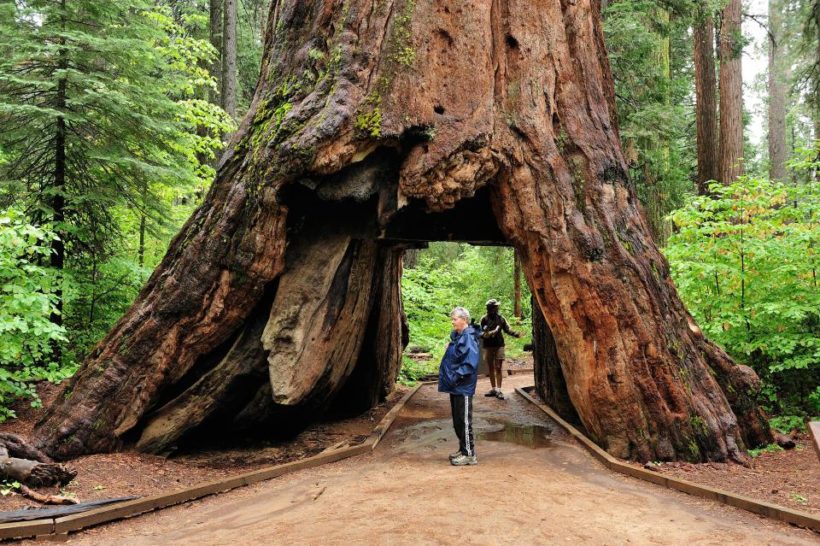 (By Natalie O’Neill, 1/9/17, NY Post, With Post Wires) – Nature lovers are pining over the loss of a historic centuries-old California tree that toppled in a wild storm over the weekend, according to a report Monday.

The giant hallowed-out sequoia dubbed Pioneer Cabin — which was large enough to drive a truck through — fell Sunday afternoon in Calaveras Big Trees State Park after it was hit with strong rain and wind, officials said on social media.

“The Pioneer Cabin tree has fallen!” The Calaveras Big Trees Association said on Facebook. “This iconic and still living tree — the tunnel tree — enchanted many visitors. The storm was just too much for it.”

The tree, which measured 33 feet in circumference, was hollowed out in the 1800s to allow tourists to pass through it. It’s exact age is unknown. Visitors pose beneath Pioneer Cabin, a famous sequoia tree in California, in 1899. The opening in its trunk was large enough for a four-horse stage-coach to drive through. On Sunday, the tree was felled by winter weather. (Photo: Benjamin Lloyd Singley, The NY Public Library)

Arborists were blue over the death of the big green giant. “R.I.P. Pioneer Cabin tree– this mammoth sequoia tree will be forever missed by its many visitors,” tweeted reps for the horticultural firm Davey Tree.

The wild storm was one of the worst storms to strike the West Coast in decades. Dozens of California drivers were stranded on the side of flooded roads and 1,000 people were forced to evacuate homes in Nevada.

(Reuters, 1/10/17, Reporting by Dave Graham; Editing by Bill Rigby) – Pranksters changed the name of Mexico’s lower house of Congress to the “Chamber of Rats” on Google Maps on Tuesday in the latest dig at the political class during a testing start to the year for the country’s government. The lower house, also known as the Chamber of Deputies, became the “Chamber of Rats”, using the Spanish word “rata,” which is also slang for thief in Mexico. (Image: Google Maps)

The lower house, also known as the Chamber of Deputies, became the “Chamber of Rats”, using the Spanish word “rata,” which is also slang for thief in Mexico.

“Our teams are working fast to resolve this incident,” Google Mexico said in a statement, explaining that place names on the online mapping service came from third parties, public sources and contributions from users.

It was the second such attack in the space of a few days.

Mexican media reported at the weekend that the presidential residence appeared as the “Official Residence of Corruption” on Google Maps before Google Mexico removed it from the map and apologized for “inappropriate content” created by a user.

Mexico’s government has faced protests, road blocks and looting of shops since the start of 2017, when the cost of fuel jumped sharply.

Allegations of corruption swirl constantly around the political class in Mexico.

A 2013 Transparency International study showed that 91 percent of respondents felt political parties were corrupt or extremely corrupt. Some 83 percent took the same view of the legislature, the study showed.

The credibility of President Enrique Pena Nieto was damaged by a conflict-of-interest earlier in his six-year term when it emerged that he, his wife, and his then-finance minister had all acquired homes from government contractors.

A government-ordered probe cleared all of any wrongdoing.