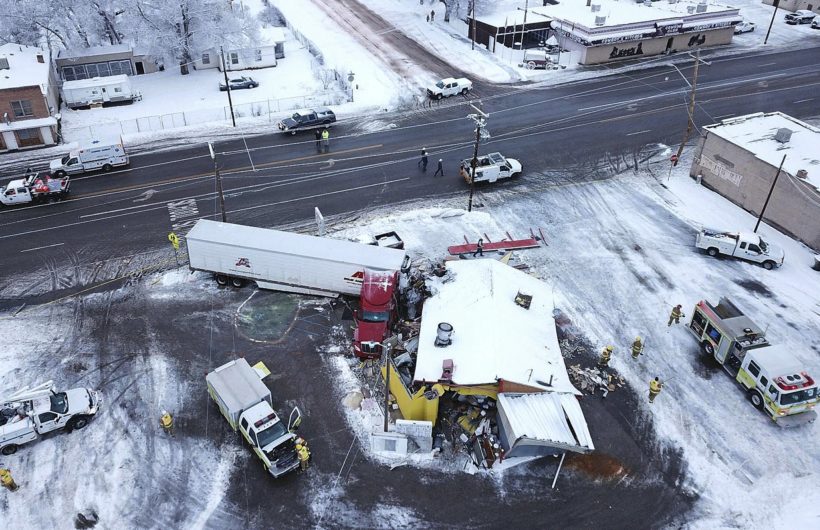 This Jan. 16, 2019 photo taken by a Utah Highway Patrol drone shows a big rig that has crashed into a resaturant in Wellington, Utah.

(Associated Press, May 20, 2019) SALT LAKE CITY — In Utah, drones are hovering near avalanches to watch roaring snow. In North Carolina, they’re searching for the nests of endangered birds. In Kansas, they could soon be identifying sick cows through heat signatures.

Public transportation agencies are using drones in nearly every state, according to a survey obtained by The Associated Press ahead of its release Monday. The report from the American Association of State Highway and Transportation Officials shows a sharp increase in their use over the last few years, reflecting the rapid adoption of the technology by governments as well as hobbyists.

In 2016, the nonprofit group found no state transportation agency was using drones on a daily basis. Now, 36 states have certified drone pilots on staff. When the survey was done this month, all but one state was using drones in some way. Since then, the lone holdout — Rhode Island — has bought a drone, said Tony Dorsey, a spokesman for the group.

The small, unmanned aircraft are often used for mundane tasks, like inspecting bridges and roads. With sophisticated cameras and thermal technology, they can detect tiny cracks and identify potential potholes before they’re visible to the human eye.

Drones have caused their share of headaches for officials over the years as personal devices forced the grounding of planes at airports or those fighting wildfires.

But they also can be useful for work that’s dangerous for people.

In Utah, drones record from the air as state workers set off planned avalanches, allowing them to watch the slides close up in real time, said Jared Esselman, director of aeronautics at the state Department of Transportation.

Drones also can measure snow and other elements of the state’s rugged terrain to keep them from blocking roads or other infrastructure.

“We can predict not only snow slides, but mudslides and water runoff as the snow melts,” Esselman said. “Drones are a perfect tool for any job that is dangerous or dirty.”

Utah is getting 40 new drones to take photos at traffic wrecks for investigators.

People used to fan out in helicopters or all-terrain vehicles to check for evidence of the protected birds before building new projects, but the drones can do the job quicker with less disruption, Yap said.

They’re also used to check for protected bats nesting under bridges and to spray herbicide on invasive plants near shorelines.

North Carolina is one of three states working with the Federal Aviation Administration to test drones beyond the operator’s line of sight, at night and over people. The FAA does not usually allow those uses without a special waiver.

In Kansas workers are using drones to create sophisticated farming programs and monitor cattle heat signatures to prevent any illnesses from spreading.

A number of states are beginning to explore how to regulate a flood of private drone traffic expected in the future. In Ohio, the state is working on an air-traffic control system called SkyVision, which would allow drones to detect and avoid other aircraft in flight.