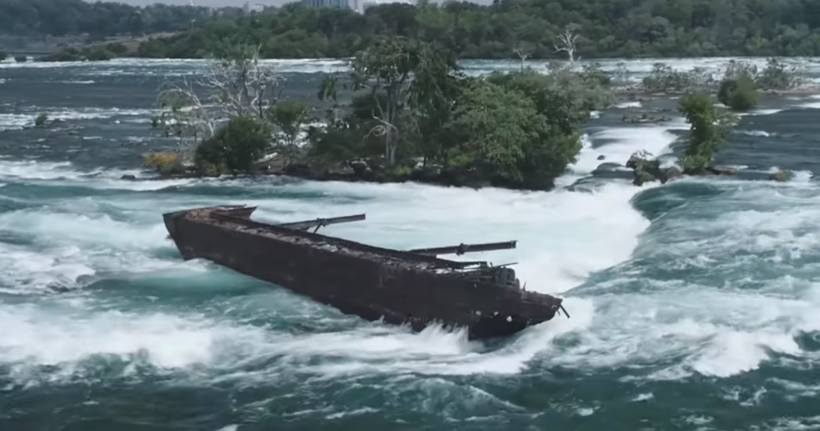 (By Lee Brown, NY Post) – A century-old shipwreck stuck on rocks above Niagara Falls crept closer to the edge for the first time in 101 years following a heavy storm, officials have confirmed.

The decaying Iron Scow has been a key part of the falls folklore for generations after becoming lodged in rocks on the Canadian side in 1918 — after breaking loose from its tug and sparking a dramatic rescue of its two passengers.

But the steadfast vessel moved for the first time in over a century, ending up more than 150-feet downstream from its usual position following heavy storms, Niagara Parks said.

“It has been in place for over 101 years but it appears that last night, on Halloween, that the scow shifted,” senior manager of heritage Jim Hill said in a video posted Friday.

Hill said the scow “appears to have sort of flipped on its side and spun around,” adding, “We think it turned and twisted in the very heavy current and flow of the river.”

Its new resting spot is close to the edge of Horseshoe Falls — the largest of the three falls there — with officials unsure of how long it will stay there.

“Will it stay in place? Well, it’s been stuck there for 101 years,” Hill said in the video.

If it does seem like the scow will go over the Falls, authorities will be notified so that precautions can be made to keep tourists well away, Niagara Falls CEO David Adames told the Canadian Broadcasting Corporation.

“It looks secure at the moment; however, if there’s severe weather that comes along, it may shift it some more,” he told the station.