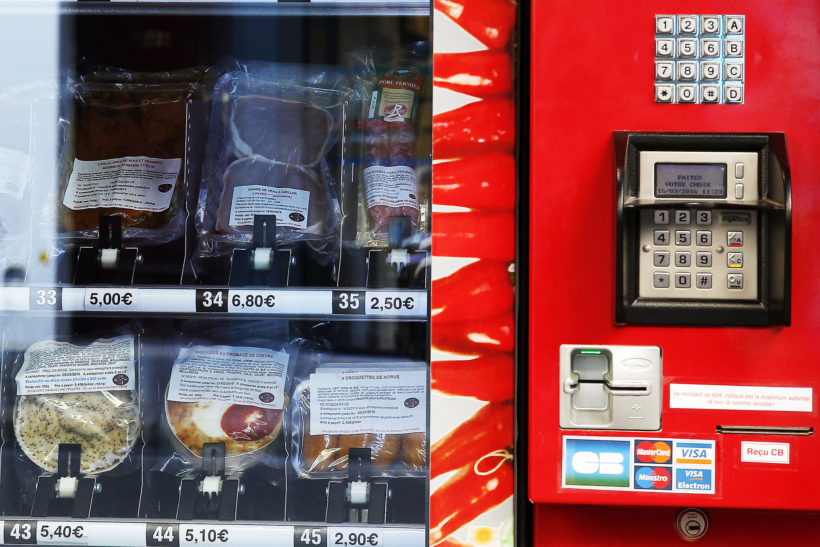 A close up of the first meat vending machine installed in the French capital, in Paris, Tuesday, March 15, 2016.(AP Photo/Christophe Ena)

(London’s Daily Telegraph) – It was installed this week outside a butcher’s shop in the fashionable 11th arrondissement (administrative district).

“The vending machine offers a selection of our products which we prepare and vacuum-pack ourselves,” said Florence Pouzol, owner of the Basque boucherie, L’Ami Txulette. “We wanted to give our customers an additional service when the shop is closed.”

The introduction of the meat dispenser is in line with a trend to make fresh produce available 24 hours a day, despite strict laws governing Sunday opening and the reluctance of many shops to open seven days a week.

Paris got its first 24-hour baguette vending machine in 2011 when a baker installed one next to his boulangerie. Since then, hundreds more have been installed across the country.

It is France’s fifth meat vending machine. The other four are located in the provinces.

A delicatessen in the central town of Mennetou-sur-Cher installed one last month that sells andouillette, a strongly-flavoured sausage made with pig’s intestines.

“Mennetou andouillettes have a great reputation and people come from afar to buy them,” the shop owner, Pascal Bidron, said. “We see people walking past and looking at our display on Sunday afternoon, but we’re closed then. We can’t work seven days a week so that’s why we decided to install the machine.”

Last year a cheesemonger in the eastern town of Pontarlier installed an automatic cheese distributor.

But the spread of food vending machines is proving controversial. Traditionalists say they will lead to the demise of craft butchers, bakers and cheese shops.

“I oppose these machines because they stop people coming into our shops,” said Emmanuel Gripon, an official of the French Bakers’ Federation. “It’s contributing to the desertification of the countryside and it harms the social life of communities.”

However, many people welcome the machines as a convenient source of fresh produce.

François Joly, 26, who lives near the Paris meat dispenser, said: “At first you think it’s strange, but then you realize it might be a good way to buy meat if you work late and feel like a steak when you get home.”

However, another local resident, Véronique, a retiree, said: “I find the idea of buying raw meat from a machine a bit off-putting. It’s impersonal, and what if the refrigeration system fails?”

(London’s Daily Telegraph) – The owner of a highly rated restaurant outside Paris has banned bankers from his eatery in revenge for being denied a loan.

Alexandre Callet, 30, who runs the gourmet restaurant Les Ecuries de Richelieu, is furious with financiers after he was refused a €70,000 ($79,842) credit line to open a second venue.

The blackboard outside his restaurant in Rueil-Malmaison, an upmarket suburb to the west of Paris, now reads: “Dogs welcome, bankers banned (unless they pay an entry fee of $79,842).” “As soon as I see a banker that I recognize I won’t let them enter my restaurant. They have treated me like a dog, so I have denied them access,” he said.

“I’m not going to police the doors but the people concerned know who they are,” he told Le Figaro.

His move has struck a nerve among many entrepreneurial Frenchmen and women who feel stifled by a lack of financial support from the banking sector.

He described his act as one of desperation at the “permanent sabotage of the economic fabric of France,” whose growth is near-stagnant and unemployment rate at record levels.

“This is not just a kebab shop. My restaurant is in the Michelin guide and film stars come in here,” Mr Callet told the Local. “A lot of bankers who turned me down know me. They come in here.”

“I have never had financial problems and yet I find myself in this situation. Bankers are not doing their job. That’s why we have so many businesses in France who have to resort to crowd funding.

“France has problems understanding this. That’s why London has become the sixth French city,” he said.

“It’s the problem with our French Socialism. We have more civil servants than anywhere in the world, we have a social welfare system that has a bigger budget than the American defence budget.

“There’s the 35-hour week. There is globalization, yet our businesses are completely blocked. We can’t find oxygen.”

The restaurateur said he had already received a personal apology from one bank director. “He came to the restaurant this morning and was visibly very put out,” he said.

He was also contacted by Qatar’s embassy in Paris, which offered to put him in contact with a Qatari bank.

But he said he had waited so long for the loan that the plan to open a second restaurant has fallen through for now, and besides: “I don’t want to work with bankers anymore.”