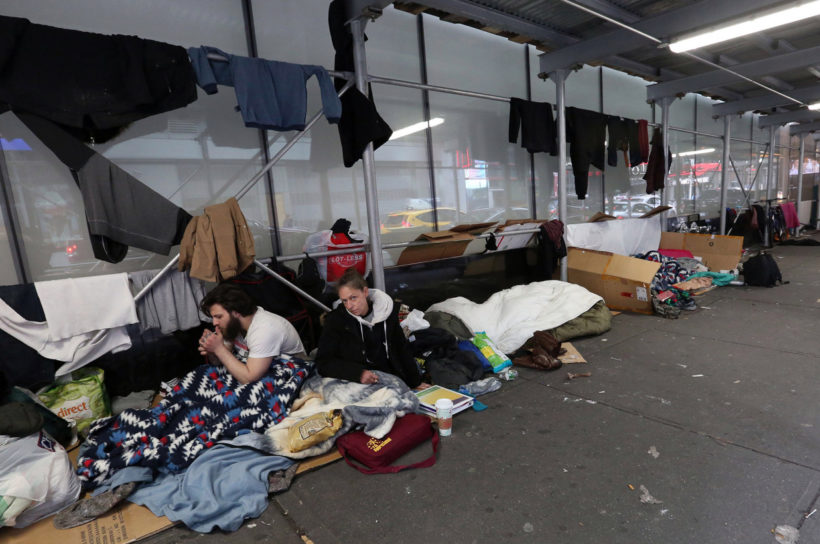 (By Sara Dorn, The NY Post, 10/26) – From the tropical shores of Honolulu and Puerto Rico, to the badlands of Utah and backwaters of Louisiana, the Big Apple [New York City] has sent local homeless families to 373 cities across the country with a full year of rent in their pockets as part of Mayor Bill de Blasio’s “Special One-Time Assistance Program [SOTA]. ” Usually, the receiving city knows nothing about it.

City taxpayers have spent $89 million on rent alone since the program’s August 2017 inception to export 5,074 homeless families — 12,482 individuals — to places as close as Newark, NJ, and as far as the South Pacific, according to Department of Homeless Services data obtained by The Post. Families, who once lived in city shelters, decamped to 32 states and Puerto Rico.

The city also paid travel expenses, through a separate taxpayer-funded program called Project Reconnect, but would not divulge how much it spent. A Friday flight to Honolulu for four people would cost about $1,400. A bus ticket to Salt Lake City, Utah, for the same family would cost $800.

Add to the tab the cost of furnishings, which the city also did not disclose. One SOTA recipient said she received $1,000 for them.

DHS defends the stratospheric costs, saying it actually saves the city on shelter funding — which amounts to about $41,000 annually per family, as compared to the average yearly rent of $17,563 to house families elsewhere.

But critics says the “stop-gap solution” has been wrought with problems, and ultimately has failed to help curb the city’s homelessness.

Not only are officials in towns where the city’s homeless land up in arms, but hundreds of the homeless families are returning to the five boroughs — and some are even suing NYC over being abandoned in barely livable conditions. Multiple outside agencies and organizations have opened investigations into SOTA.

“We were initially seeing a lot of complaints about conditions. Now that the program has been in operation long enough that the SOTA subsidy is expiring, one of our main concerns is it might not be realistic for people to be entirely self-sufficient after that first year,” said Jacquelyn Simone, policy analyst at Coalition for the Homeless.

DHS said 224 SOTA families have ended up back in New York City shelters. The agency did not answer The Post’s repeated requests for the number of families who wind up in out-of-town shelters.

“We suggested that DHS reach out to people as their subsidy runs out to confirm they will be secure and not have to re-enter shelter, but the agency told us they have no plans to do that,” said Legal Aid lawyer Joshua Goldfein, whose firm represents SOTA families who say the city pressured them to move into New Jersey slums, then ignored calls for help.

About 56% of the families move out-of-state, costing the city an average of $15,600 in annual rent. Thirty-five percent move within city limits with an average rent of $20,500, and 9% move elsewhere in New York state, costing approximately $17,900.

Homeless individuals and families are eligible for SOTA if they can prove that they have been in a New York City shelter for at least 90 days and that their household income is no more than twice what it owes in rent. DHS would not expand on eligibility rules.

The agency’s website provides vague descriptions of the income and shelter-stay requirements.

DHS said its reps work with landlords in cities where families want to move to find housing. At least two SOTA families told The Post DHS pre-selected New Jersey apartments for them to view during a “van run,” then insisted they quickly sign leases.

Some pols in towns taking in NYC refugees were shocked by the news.

“So in other words if someone is in a shelter y’all will give them money to go somewhere else if they have been there for 90 days? And some of those people have been sent to Metairie?” said Michael Yenni, president of Jefferson Parish, Louisiana, when The Post told him the community is among the SOTA destinations.

“I’m not in [New York City’s liberal Democratic] Mayor Bill de Blasio’s shoes. I don’t sit behind his desk, and I never will, but it’s certainly interesting. You have shocked me down here in beautiful Southeast Louisiana.”

The mayor of Willacoochee, Georgia, was similarly stunned. “I’m not familiar with none of that,” Samuel Newson said.

The mayor of Harrisville, Utah — who was so baffled to receive a call from The Post that she questioned if the reporter had the wrong number — asked if SOTA recipients are connected to social services in the towns where they move.

“Are they just cutting them loose and saying, ‘Here you go?’ Or are they making sure they don’t find themselves in the same situation a year later?” Michelle Tait asked.

Pols in New Jersey, where 2,226 SOTA families have moved, say the answer to Tait’s latter question is “No.”

Mayor Tony Vauss of Irvington, the destination for 278 SOTA families, said he is “highly disturbed by the lack of communication from New York City and the lack of oversight of this program by the city.

“SOTA recipients are the population of citizens who require ongoing social services and resources … Therefore, once SOTA ceases funding, program recipients end up using our state and local resources to maintain themselves.”

Some SOTA recipients have also attacked the program.

Sade Collington, her husband and two children, moved back into a Bronx shelter after relocating to an East Orange, New Jersey, apartment that had no water, heat or electricity.

“It was completely unlivable. We could not stay there any longer. We went to a shelter for another six months,” she said.

Collington has filed a notice of claim against the city indicating she plans to sue over the ordeal.

Her story was featured among several other SOTA families’ in a CBS 2 special highlighting the decrepit conditions they were housed in — and how their concerns fell on deaf ears at DHS.

In Newark, home to 1,198 SOTA families, the city is “in the process of passing an ordinance to ban New York from sending us SOTA clients,” said city spokesman Mark Di Ionno.

The State Senate has an ongoing, separate SOTA investigation.

DHS spokesman Isaac McGinn said the city “remains committed to using every tool at our disposal to help these families and individuals find stability in the ways that work for them.

“Any American, including any New Yorker experiencing homelessness, has the right to seek housing where they can afford it and employment where they can find it.”