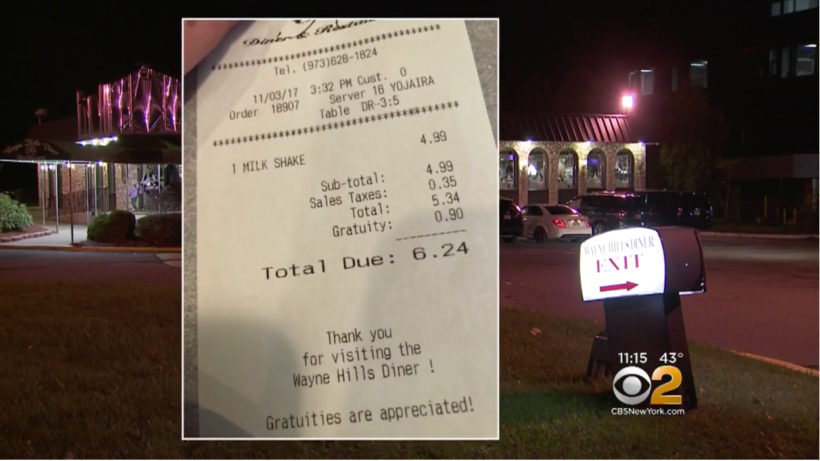 (CBSNewYork, Nov. 8, 2017) WAYNE, NJ — A so-called “teen-tax” has left customers at a New Jersey restaurant with a bitter taste in their mouths.

At the Wayne Hills Diner and Restaurant, the checks clearly state “gratuities are appreciated,” but one mom says for kids and teens, the tips have become mandatory.

“It’s not how much she paid, it’s the simple fact she didn’t have a choice,” Wayne mother Melissa Desch said. “So she was double-tipping the server because she didn’t realize they were adding the tip onto the bill.”

Desch and her family have been going to the diner for years, so she was disappointed and surprised when her 11-year-old daughter sent her a picture showing a 90 cent tip was unknowingly added to her milkshake.

“I got charged gratuity and my mother was there the same day and she didn’t,” Melissa’s daughter, Bella Venezian, said. Her friends got charged $1.31 and $1.58 extra.

CBS2’s Jessica Layton went to the restaurant to try and ask someone about the policy of adding gratuity for some and not others. The owner didn’t reply, and the staff referred CBS2 to their attorney, who said the kids have been showing up at the diner in groups of 20 or 30, staying for an hour or two, and the majority don’t leave a tip.

He says it’s not fair to the waiters and waitresses who earn a living based on tips, adding the menu clearly states “management reserves the right to add 18 percent gratuity.”

Melissa wonders whatever happened to tipping being optional. She says she’d like to see a consistent policy.

“Make it for everybody,” she said. “Adults, children, everything.”

(by Aaron Young, Des Moines Register, Oct. 25) – The Iowa Department of Transportation wants to remind motorists that fall is breeding season for deer, so chances are you’ll likely spot some while driving along the state’s roadways.

“We actually get this question on a pretty regular basis: ‘Why don’t you put these signs where it is safer for the deer to cross?'” the Iowa DOT said in a Facebook post Tuesday.

“Deer can’t read signs. Drivers can,” the Facebook post continued. “This sign isn’t intended to tell deer where to cross, it’s for drivers to be alert that deer have been in this area in the past.” The post, as you’d might expect, triggered quite the response from Facebook users, with dozens of comments along the lines of “please tell me you’re joking” and “the fact that you have to answer a question like this disturbing.”

But it never hurts to be crystal clear in order to be safe — especially when there were 7,163 crashes reported to law enforcement across Iowa in 2016, Tyler Harms, a wildlife biometrician with the Iowa Department of Natural Resources, told the Register earlier this month.

“The [deer are] moving out of areas of cover to areas where they can feed,” Harms said. “They might not have to go very far from cover to food, but in other cases they may have to travel longer distances in order to satisfy those needs.”

According to a recent study by State Farm Insurance, Iowa drivers have a 1 in 69 chance of hitting a deer. Those odds rank fourth-highest in the country.

Additionally, 65 percent of Iowa’s animal-collision claims are filed between September and November, per Farmers Insurance.

“Be sure you’re vigilant and alert when you’re driving, and that will be helpful,” he said.