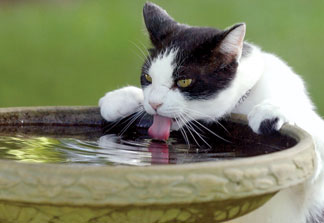 Science of slurp
Ever wonder why cats lap quietly and dogs slurp loudly? Maybe not, but an MIT biophysicist did, and his discovery landed in the latest issue of the journal Science. Cats, Dr. Roman Stocker found, have tongues that curl backwards, not forwards. As the tongue darts down toward the bowl, it touches the surface of the liquid rather than penetrating it, the fluid sticks to the tongue, and the cat drawing the tongue up very rapidly creates a liquid column. Dogs scoop their liquid by creating a ladle with their tongues. After capturing his own cat Cutta Cutta on slow-motion photography, Stocker concluded: “I would say cats know more about fluid mechanics than dogs.”

Horse power
A horse is a horse. But is it a weapon? Administrators at Hamilton-Wenham Regional High School in Hamilton, Mass., say it is. In late October, senior Dan DePaolis dressed as a knight and rode his family’s horse to school for the school’s spirit week. DePaolis’ father, Ron, said the horse was calm and that his son only walked the horse around school grounds for three minutes before an associate principal came out and suspended DePaolis on the spot. “They told my son it’s the equivalent of bringing in a loaded firearm to school,” the father told the Boston Globe. The 17-year-old student was suspended for one day and prescribed two hours of community service for his horsing around.

Checking in
Finally after 60 years, the Boston Public Library has its John Stuart Mill autobiography back. An anonymous man returned two books to the library by mail after having checked them out in 1950. The package, containing a book by Henry David Thoreau and another by the 19th-century British political theorist, also contained a letter by the forgetful library user: “While going through the books in my library, I came across these two books that don’t belong to me, they belong to you. I must have taken them out when I was a college student in Boston and put them among my other books, and never realized that I failed to return them.”

Coconut caution
When the president of the United States comes visiting, you can never be too cautious. How cautious were officials in Mumbai? They cut down all coconuts from the coconut trees surrounding the city’s Ghandi museum ahead of President Obama’s early November visit. Every year people are injured or killed from being hit by falling coconuts. “We told the authorities to remove the dry coconuts from trees near the building,” a government spokesman told the BBC. “Why take a chance?”