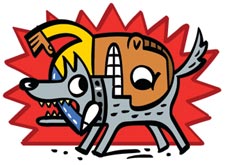 Man bites dog
Roderick Lewis may be facing jail time, but he can take solace in the fact that his assault on a police dog fulfilled many a headline writer’s dream. When a West Haven, Conn., police officer tried to take the 23-year-old man into custody on Oct. 7, the drug suspect punched the cop in the face. That’s when the officer’s police dog bolted out of the nearby squad car and latched onto Lewis’ leg. Police say Lewis then responded in kind, biting the dog before quickly being subdued by the officer. With Lewis in police custody facing charges, including a charge of cruelty to animals, the officer and the dog received medical treatment. Young journalists are often taught that while “Dog Bites Man” isn’t news, “Man Bites Dog” is a front-page story.

Tax for being taxed
Apparently running out of things to tax in order to make up for a budget shortfall, officials in Livonia, Mich., are contemplating instituting a tax on all property taxes paid. The tax, called an administrative fee, would add a 1 percent charge to property owners’ tax bills. A spokesman with the Michigan Municipal League took umbrage with calling the charge a tax, noting that the fee is to pay for a service. Of course, few Livonia residents would call tax collection a service they cherish. Meanwhile Mayor Jack Kirksey, who supports the idea, preferred to look on the bright side, saying most Livonia residents will see lower property tax bills this year-but that’s only because the depressed Michigan economy has caused declining property values.

Piano man
Xavier Ross picked the wrong place to fiddle around on a piano. The 19-year-old drew the attention of Grand Rapids, Mich., police on Sept. 17 when he played continuous loops of “Chopsticks” on a piano left outside the police station for an art fair. An officer was about to arrest Ross for disturbing the peace when another officer recognized him as the prime suspect in a recent home invasion. After checking a warrant, police picked up the teen, who now resides in the Kent County Jail.

Off the shelf
You won’t find it in a bargain bin, and you may have a hard time fitting it in your car. But for $100,000 you can purchase one of the 31 copies of Earth, Platinum edition, published by Millennium House. A copy of the 6-foot by 9-foot atlas was on display at the Frankfurt Book Fair in early October. Guinness World Records disputes the publisher’s claim that the atlas is the world’s largest book, reporting that a book measuring 13.71 feet by 12.36 feet and weighing 1.2 tons exists in Hungary. In a statement to NBC, Suzanne Gross of Millennium House stood by the publisher’s claim: “When is a book a book? If there is only one copy produced is it a ‘book’? . . . Anyone can grab two huge planks of wood, hinge them together and paste in some paper and call it a book.”