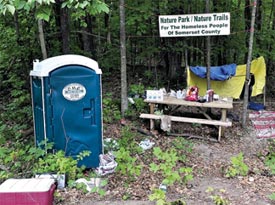 Natural law
By now, some residents are probably wishing that town officials in Skowhegan, Maine, would simply let Bruce Obert do what he wanted with his land. Officials in Skowhegan barred Obert from building on a quarter-acre parcel near downtown. So, rather than let the land sit unused, Obert, who lives in Norridgewock, hung a banner, saying, “Nature Park, Nature Trails for the Homeless People of Somerset County.” Since the “nature park” opened, an 84-year-old homeless man and his Rottweiler dog have moved onto the land.

Reverse speeding
You can’t blame Jeanette Sedillo for being surprised when a police officer pulled her over on Aug. 18 in Belen, N.M. “He said, ‘You were going 34 in a 40,'” said Sedillo. She said she thought she was simply practicing safe nighttime driving. Nevertheless, the officer presented her with a $70 ticket for driving 6 mph under the speed limit. Sedillo said she plans to fight the ticket in court.

Bee careful
Call it melissophobia, but there’s little doubt that most normal humans can’t do what Albert de Vries just did. At a major bee bearding competition in Ontario, Canada, de Vries won first prize by being brave enough to allow 50,000 honeybees to climb on his head, face, and shoulders. A parlor trick among beekeepers, bee beards are formed when a person attaches a box with a hive’s queen to his neck. From there, the usually docile bees swarm their queen, forming a beard of bees on the keeper. Near the queen, the bees don’t usually sting. In de Vries’ case, the 50,000-bee beard weighed in at more than five pounds.

Taxing a state treasure
New Yorkers noticing the price of bagels increasing across the state have state lawmakers to thank. That’s because the cash-strapped state has begun enforcing a stale measure that imposes a small tax on sliced or whole bagels-an Empire State staple-consumed at the place of purchase. After a recent state audit, the owner of Bruegger’s Bagels, a popular New York chain, said he was hit with a significant charge in back sales taxes. Now bagel shops across New York are raising prices about 8 cents per bagel to cover the now-enforced tax.

Conspicuous con
The case of a stolen vehicle reported to Allentown, Pa., police on Aug. 23 proved easy enough to solve. Police reports indicated the suspect, 39-year-old Preston Renninger, drove the stolen car right past an officer as he was taking a report from the victim. Police say Renninger attracted even more attention by blaring the stereo with the windows down.

Smell test
When the garbage reached critical mass at one New Jersey landfill, local authorities decided to fight smell with smell. More than 2 million pounds of garbage arrive every day at the Middlesex County Landfill in East Brunswick outside of New York City. And after hearing a bevy of complaints from residents, landfill operators have outfitted special trucks to spray fragrance around the landfill, which is on pace to receive as much as 1 billion pounds of garbage this year. “It has a pleasant, showery smell,” said Richard Fitamant, executive director of the organization that runs the landfill. “It’s not offensive and it’s not overpowering. It’s a light scent.” Neighbors say that would be an improvement on the current stench, which they say seeps through the walls some days.

No two ways about it?
Ask Nevadans how to pronounce their home state’s name and they’ll almost certainly say, “Ne-VAD-a” with the second syllable sounding like “mad.” Residents of the Silver State have booed presidential candidates who mispronounced it, saying “Ne-VAH-da.” So imagine the gumption of Democratic state legislator Harry Mortenson of Las Vegas who submitted a draft of a bill proposing that either pronunciation of the state’s name is acceptable. “I expected a big controversy, and I got it,” he said. “The bottom line is, I do not want to change the pronunciation that Nevadans use for their state. I am trying only to ask them to be tolerant of those who use the Spanish pronunciation.” But Nevada residents aren’t likely to be so understanding. And just to be on the safe side, Mortenson waited until state term limits prevented him from running for reelection before submitting the controversial bill.