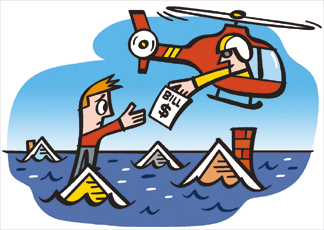 Now, the pre-hurricane warning of “stay at your own risk” could imply more than just a risk of bodily injury: It could imply economic risk too. The Texas state Senate passed a provision on April 24 declaring that people rescued by emergency workers after ignoring an emergency evacuation order would be forced to foot the bill. Despite an evacuation order preceding Hurricane Ike, more than 20,000 residents remained on Galveston Island in Texas when the storm made landfall on Sept. 13 last year. More than 3,000 were rescued. “They have that right to remain if they choose to,” said Sen. John Carona, who authored the bill. “But they stay at their own peril, and they stay with the possibility that if recovery is necessary to preserve their lives, they’d pay the related cost.” How much? A single hour of a helicopter rescue costs approximately $4,400.

‘Altar’ called
Sometimes catering to people with disabilities brings everyone down. That’s the attitude of motorists seeking to park in a lot in Sheringham, Norfolk, in the United Kingdom. Local authorities installed a wheelchair-friendly pay station in one car park to make life a bit easier for disabled motorists. But at just three feet tall, the machine forces some patrons to kneel in order to pay for their parking space. Gerry Bedford, a retired chemist, told the Daily Mail, “I am 6-foot, 5-inches tall and I had to get down on my knees to use it. I saw a lady kneeling down to get her ticket as well and I remarked to her, ‘It’s a ticket machine, not an altar.'” Advocates for the disabled are also complaining: The short machine, they say, poses a real safety hazard to wheelchair-bound patrons who could fall out of their chairs reaching for a ticket at the bottom of the device.

Tough justice
Mr. T pities the fools who didn’t show up to the Cook County Criminal Court building on April 27 for jury duty. That’s because they missed out on spending their civic duty time with the colorful actor who starred in the hit television series The A-Team and in Rocky III. Chicago resident Mr. T signed autographs and posed for pictures with fellow potential jurors, court officials, and even the family of the defendant before jury selection. But the 1980s icon failed to make the final jury despite promising justice, T style. “If you’re innocent, I’m your best man,” he said. “But if you’re guilty, I pity that fool.”