Monkey patrol
Police in the southern Thai province of Yaha have a new weapon to help quell the unrest of its separatist-minded Muslim citizens: a monkey in a cop uniform. Because of the unrest in southern Thailand, police units have been forced to set up road checkpoints, which have caused aggravating delays for already perturbed Muslims in the area. To ease the tension, the staff at one checkpoint has dressed a small pig-tailed macaque in a police uniform and allowed him to roam and entertain the delayed motorists. The diversion has been considered a success locally, and other checkpoint staffs have expressed interest in suiting up their own monkeys. 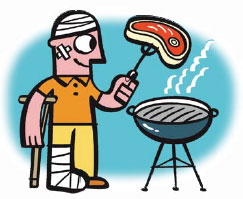 One Durham, Maine, teenager managed to survive a run-in with an 1,800-pound bull-and said he’ll be getting the last laugh. Vinnie Huntington, 17, had been trying to round the bull and a steer into a pen on his family’s farm on April 5 when the massive bull turned on him. “He turned around, he looked at me, and he just started running-and that was the worst part . . . because I knew I wasn’t going to be able to do nothing,” Huntington said. “The first time, he knocked me in the air and hit me in the back, and that’s when I ran the other way and he hit me and I just went to the ground.” Eventually Vinnie was able to get away, but not before suffering from a pair of dislocated shoulders and some puncture wounds from being gored. The Maine teen told a local TV station that the family has already killed the bull and also plans to eat the animal: “I’m going to enjoy it, too.”

Eat wrong!
Government health officials in the United Kingdom want their citizens to stay away from junk food-with the exception of 2-year-old Zak Hessey. Parents Lisa and Paul Hessey took the child to a doctor when Zak began refusing to eat and dropped to 17 pounds. But when doctors and social workers ordered the Hesseys to begin feeding Zak junk food, his health-conscious parents refused. That’s when nanny state officials took custody of Zak, placing him in foster care where substitute parents tried to force on him chips, cake, and chocolate. After four months, Zak had gained only one pound, and officials were forced to sheepishly admit that the Hesseys were, in fact, “good parents.”

Criminal minds
Police can add the intentions of a Port St. Lucie, Fla., man to the list of bizarre crime motives. Authorities say 28-year-old Joseph M. Velardo stole two computer batteries from a local Staples store. Police also say Velardo actually hoped to be caught and convicted of a third-degree felony, telling police he wanted a rap sheet to make him ineligible for law school. The police report says Velardo told them he was on medication for a “mental condition.” According to the report, Velardo walked out of the store with two pricey computer batteries, then walked back in, confessed to store employees and asked them to call police. One problem: The batteries Velardo stole and then quickly returned were worth only $276.88-shy of the $300 threshold for a felony charge. By day’s end, Velardo had two things he didn’t want: a misdemeanor charge and the ability to go to law school.

Time & money spent
Confirming what husbands, sons, and boyfriends have suspected for years, an online market research firm called OnePoll.com found that the average woman spends 25,184 hours and 53 minutes-or nearly three years-shopping during an average lifetime. The staggering total breaks down to about 400 hours-nearly 17 full days-of shopping a year, with clothing edging out food as the most time-consuming shopping category, according to the survey.