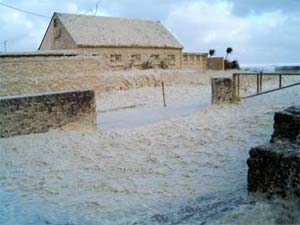 Foamed over
It may look like an April snow hit Perranporth, Cornwall, but in fact it was something only a bit less dramatic-sea foam. In early April, powerful wind gusts stirred up an incoming tide into a froth that then blanketed the English town. The foam was reportedly up to three feet deep in some places. Said 77-year-old resident Gordon Blanks: “It is the first time in 15 years I have seen the foam as bad as this.”

Still singing
When Mervyn Salmon first joined the choir at St Cuthbert’s Church in Wells, Somerset, King George VI was on the throne, Winston Churchill was prime minister, and Adolf Hitler stood towering over Europe. Salmon was 8 years old when he joined the church’s choir in 1940, and in April he celebrated 70 years of serving there. He reportedly hasn’t missed a service in those 70 years, except for when he served in the military in the Suez during 1956. He says that in the old days, 35 to 40 children sang in the choir, but not anymore: “One of my regrets is how choirs have changed,” he told the BBC. “We’ve no youngsters in the choir now.”

Animal games
Eight donkeys, two baskets, and one ball. Some Washington teens thought it would add up to a night of good clean fun. Animal-rights activists didn’t agree. Seniors at Snohomish High School in Snohomish, Wash., have held Donkey basketball games for years to help raise money for a graduation party. The annual donkey basketball matchup pits a four-person faculty team against a four-person team of students. The rules are similar to basketball, except that participants must be riding on the back of a donkey during the game. “The donkeys are pushed, kicked, shoved, and prodded to do something that is unnatural for them and confusing,” said PETA’s David Schirk. But the donkeys’ owner, Bruce Wick of Donkey Sports, says the animals don’t mind at all: “When I back into the corral, they’re all fighting to see who gets to go” to the game.

A penny owed
Almost more aggravating to Luis Gomez than having to pay off a traffic ticket was the fact that it cost him 600 times as much to park at the Orange County, Fla., clerk’s office to pay in person. The Florida man had thought that he paid a traffic ticket last year but had accidentally underpaid by one cent, prompting local authorities to issue a warrant for his arrest. Fearful that police would arrest him at the school where he worked, Gomez decided to pay the cent in person-and pay the $6 to park at the county building. “They won’t take a payment of a penny online,” he told a local TV station. Gomez said that he paid in cash-and that he didn’t ask for a receipt.