Money to burn
Who is the newest Dubai real-estate titan? A 12-year-old boy who suspiciously has the same name and birthday as the president of Azerbaijan’s son. Officials with the Azerbaijani government won’t confirm it, but Heydar Aliyev, the son of President Ilham Aliyev, appears to have bought $44 million worth of real estate in the Arab emirate during a two-week buying spree last year, according to Dubai property records. Reporters are struggling to figure out just how the son of Azerbaijan’s president, who makes $228,000 a year, could afford the lavish purchases in glitzy Dubai. But a report by the U.S. State Department says the oil-rich Caspian Sea nation suffers from “pervasive corruption” and an increasingly authoritarian government. 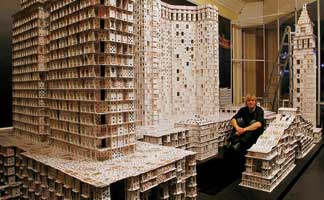 Hotel of cards
It may not be a model of structural integrity, but American architect Bryan Berg’s latest building is managing to turn heads. That’s because it is a replica of China’s Venetian Macau hotel-built with 218,792 playing cards. The card building, which set a Guinness World Record, is on display at the actual hotel. “This has been my most ambitious project yet,” said Berg. “It’s been like a real construction.”

Drawing a line
Voters in Switzerland have finally pushed back against some of the most stringent animal-rights initiatives in the world. On March 7, voters in the European nation overwhelmingly rejected a measure that would have extended rights of legal representation to the animal kingdom. That sort of legal representation for dogs, fish, birds, and chickens already exists in the Zurich region, where animal-rights attorney Antoine Goetschel regularly sues citizens on behalf of abused dogs or, in a recent case, a dead pike Goetschel says a local angler tortured when it took him 10 minutes to reel in the fish. Goetschel, who tried to rally the Swiss to vote for the initiative, admitted his highly publicized fish case may have poisoned the well: “Many voters might have been a bit fed up with the topic.”