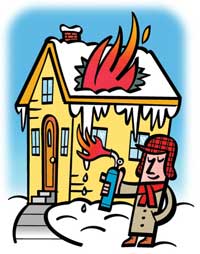 Fire starter
Just because your roof is snow-covered doesn’t also mean it’s not flammable. That’s the hard lesson a Louisville, Ky., suburbanite learned when he tried to melt icicles off the roof of his Buechel, Ky., home with a blowtorch. Instead, the man set his house on fire, causing severe damage to his attic, roof, and a new addition. A police spokesman questioned the man’s judgment: “Breaking them off is what most people do. Choosing to use a torch to melt them, in hindsight, he probably agrees is not the best idea.”

Tiny invader
More than 7,000 miles from home, a horde of New Zealand mudsnails is about to get an eviction notice. State authorities in Washington are making plans to drain the fresh water out of Capitol Lake near Olympia and replace it with saltwater to kill off the non-native snails, which are considered parasites. New Zealand mud snails, which are no bigger than a grain of rice, reproduce asexually and have no known predators in Washington. State officials, who do not know how the mudsnails got into the lake, are hoping to eliminate them before they infest the rest of the Puget Sound region.

Fetched and caught
German police say a dog helped locate a suspect on Feb. 19, but it wasn’t a police dog. When authorities arrived at the wanted man’s home on that day, a friend holding a Jack Russell terrier said the man wasn’t there. But the behavior of the dog made them suspicious. “When he put the dog down,” police said in a statement, “it proceeded with a wagging tail to a small cupboard . . . and stood expectantly in front of it.” The dog, it turns out, belonged to the suspect, who was “hunched up inside” the cupboard. Authorities did not identify the man or his alleged crime.

Animal fat
Veterinarians in the United Kingdom are urging pet owners to help pooches lose their paunches. The veterinary charity People’s Dispensary for Sick Animals reports that more than one-third of all British dogs are overweight and not exercising enough. The organization claims owners have gotten into the unhealthy habit of giving their pets too many treats and too many table scraps. And dogs are not alone. The PDSA claims the average British cat is 5 percent heavier than three years ago.