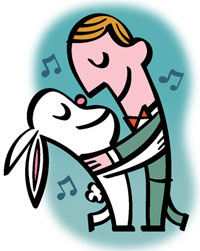 Dances with rabbits
If you’re trying to run an insurance scam, try to avoid dancing in public with a life-sized bunny. A court in Sweden convicted a supposed wheelchair-bound Swedish man and his family for perpetuating a disability fraud that cost the government more than $420,000 over three years. The man had convinced doctors and Sweden’s Social Insurance Agency that he needed help eating, moving about, and even turning over in bed. But a neighbor wise to the man’s scheme tipped off local authorities who searched the man’s house and found smoking-gun proof against his claim: pictures of the not-so-disabled fraudster dancing with another person in a rabbit costume.

A snowball’s chance
Some people save love letters. Others save pictures. Prena Thomas of Lakeland, Fla., has spent more than three decades preserving a snowball in her freezer. Thomas says she keeps the 33-year-old ice chunk-just as white as the day it was rolled into a snowball in 1977-in a bread bag and occasionally shows it off to friends. “It’s just like a little pet,” she said. A pet that stayed alive only because Thomas has never had a significant power outage.

Tiny tiger
Amateur artist Chen Forng-shean specializes in miniature sculptures. Just how small is his latest work of art? It can pass through the eye of a needle. In honor of the Chinese “Year of the Tiger,” which begins on Feb. 14, the Taiwanese artist created a sculpture of a tiger that stands just 0.04 inches in height. Chen says it’s the world’s smallest tiger sculpture. “The toughest part,” he told the AFP news service, “was painting the tiger’s tongue red.”

Cold feet
Thanks to an eagle-eyed railroad track inspector, one Alabama dog has a second chance at a life. Early on Jan. 9, Gary McLean, a track inspector for CSX Railroad outside of Birmingham, spotted a tiny puppy on the railroad tracks about an hour before a train was scheduled to pass. Upon further inspection, McLean discovered the stray puppy frozen to the tracks. As well as McLean can figure, the 5-inch-tall stray had gotten his paws wet in a nearby ditch. Then, when trying to jump the 7-inch-tall tracks, the puppy’s paws froze to the metal rails. The dog “was big time shivering,” McLean told The Birmingham News. “I felt so sorry for him.” And before the train arrived, McLean managed to free the dog from his icy shackles. The track inspector even helped the dog find a permanent home: with a local woman who has named the puppy Track.