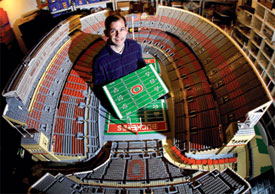 Buckeye monument
Paul Janssen’s basement project was the nexus of his two passions: football and Legos. Recently the 42-year-old Ohio State professor put the finishing touches on a two-year project where he constructed a replica of Ohio Stadium made completely from Legos pieces. The Horseshoe, as Buckeye fans call the stadium in which Ohio State plays football, presented Janssen some challenges in creating curves with rectangular blocks. But he finished the 8-foot by 6-foot replica without any glue or cutting of pieces. And while his project has impressed friends-a civil engineering colleague admiringly called the project “insane”-his wife probably has a different view. “It’s probably best I don’t comment on that,” she told The Columbus Dispatch.

Rooms without a view
Wanting to travel on the cheap in China? You might consider the country’s first “capsule hotel,” which opened in January near the Shanghai Railway Station. The hotel features 68 cabinet-sized rooms (for men only) imported from Japan, a pioneer in the capsule hotel industry. The rooms may be small, but so is the price: about $10 for a 10-hour stay and about $13 for 24 hours. “This is a huge bargain,” owner Ta Zan told the China Daily, “compared with other budget hotels in Shanghai.”

Broken break-in
Two thieves in Cologne, Germany, turned themselves in, but only because they didn’t have much of a choice. The duo, whom authorities had not identified, allegedly broke into an office building during the weekend of Jan. 9 and wanted to get to a higher floor. They entered an elevator, which then broke down. After one of the thieves injured his hand trying to get the door open, they decided to call for help. “This sounds really dumb,” one of the thieves reportedly told police using the elevator’s emergency phone, “but I’m afraid that we wanted to break in and the elevator has gotten stuck.” Firemen rescued the pair, who were promptly arrested.

A big headache
By allegedly trying quietly and painlessly to avoid a medicine recall, pharmaceutical giant Johnson & Johnson has caused a self-induced headache. Oregon Attorney General John Kroger filed a lawsuit against the company on behalf of the state claiming that the drug-maker discovered in 2008 that some supplies of Motrin sold in gas stations and convenience stores did not dissolve properly. But Kroger says that instead of recalling the drug-and possibly creating a national panic-Johnson & Johnson hired contractors to go to every store that sold the defective products and buy every bottle off the shelf. According to the State of Oregon, the company missed more than 787 bottles of the defective pain reliever on shelves in the state, opening the company up to fines that could exceed $19 million.