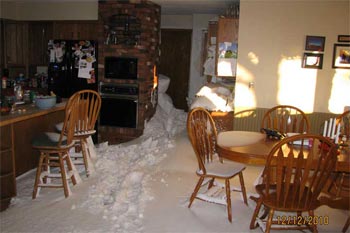 Home invasion
Away from home during a mid-December weekend, Steve and Betty Ehlers of Newell, Iowa, had family member Jim Ehlers check on their house. What he found was so unusual that he took pictures to document it: The house was filled with snow.  A snowstorm with winds up to 50 miles per hour had apparently blown open a side door on the house and sent snow blowing and drifting deep into the home-even into closets and cupboards. The Ehlerses say Jim and his wife shoveled most of the snow out of the house before they returned to it.

Game over
One South Carolina man unwittingly has given the rest of the world another reminder not to imitate video games. The undisclosed man was hit by an SUV on Dec. 27 while trying to scamper across a busy four-lane highway in Clemson, S.C. His friends told police he was a fan of the classic arcade game, Frogger, and was trying to imitate the way the video game character navigates through a maze of traffic on a roadway. Hospital officials in Clemson say the 23-year-old man was in stable condition.

The chill of victory
The New Year arrived for Spaniard Ignacio Gonzalez first with exuberance and then with fright. Gonzalez, who lives in Spain’s northern Basque country, was amazed when one of the lottery tickets he bought along with 14 other friends turned out to be the winner of a $14 million jackpot. “The New Year was off to a very good start, with a shower of millions, but on the other hand I couldn’t find the ticket,” Gonzalez told a local radio station. That’s when his experience of winning the lottery turned into a nightmare as he turned his house over looking everywhere for his winning ticket. Fueled by the fear of what his 14 friends would do if he could not produce the ticket, Gonzalez became desperate and headed out to his neighborhood’s garbage dumpster and emptied its contents onto the street. There, after rifling through bags of refuse, Gonzalez finally found the ticket that entitled him and each of his friends to roughly $800,000.