Boat for a buyer
Facing a huge budget deficit and looking to raise cash in any way possible, the United Kingdom has elected to put one of its navy’s aircraft carriers up for sale. The Ministry of Defense listed the HMS Invincible for sale on a government website, saying all bids would be considered. Mothballed in 2005, the Invincible was once one of the crown jewels in Her Majesty’s Navy. The nearly 700-foot vessel was almost sold to Australia in 1982 before the outbreak of the Falklands War convinced British authorities to keep the ship.

Full stops
Some cities have the problem of traffic signs disappearing. Then there’s Cranston, R.I., where local officials are wondering where hundreds of unauthorized stop signs came from. According to city officials, the 80,000-person town has about 700 unauthorized stop signs erected within city limits. State transportation officials have ‘fessed up to putting up about one-third of them. That leaves the city to sort out the legality of about 450 renegade stop signs on streets and parking lots. The Cranston mayor’s office is urging residents to regard all signs as legitimate until the city sorts things out: “Drivers . . . should not take this as a free pass. A stop sign is a stop sign.”

Don’t go, Diego
Police in Seattle say a driver tried to get away with driving solo in a carpool lane on Nov. 29 by placing a large doll in the passenger seat. The stuffed doll of Diego from the Nickelodeon children’s show Go, Diego, Go! reportedly belonged to the unidentified driver’s daughter. Apparently the doll’s huge, unblinking eyes drew the suspicions of a state trooper on the lookout for commuter lane violators. Authorities cited the driver for an HOV lane violation.

Snowed inn
Usually being stranded by a snowstorm for more than a week would be a nightmare. But it apparently wasn’t for five staff members and two customers who were trapped for nine days in the Lion Inn, a pub in North Yorkshire, U.K. “It was really novel at first and quite exciting,” waitress Katie Underwood told the Daily Mail. “It’s been freezing, but we’ve been lucky that it’s a pub and B&B (Bed & Breakfast) we’re trapped in. We’ve got plenty of coal for our fire, which has been great, and there are rooms upstairs so we have somewhere to sleep, and plenty of food.”

Hidden star
For more than 40 years, a Jewish symbol has hidden in plain sight in the Islamic Republic of Iran. When Israeli engineers built the headquarters building for Iran Air at the Mehrabad International Airport in Tehran, the builders installed a huge Star of David on the building’s rooftop. For years, the symbol of Judaism went unnoticed in the anti-Semitic nation. But don’t expect it to persist much longer. Once alerted to its presence by images available via Google Maps (see photo below), officials made plans to dismantle it. 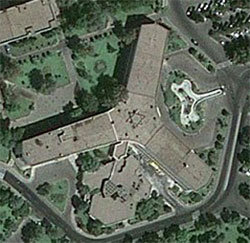