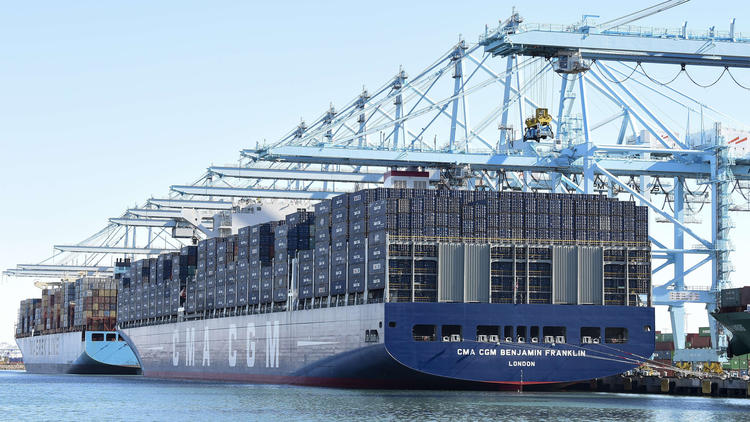 The largest container ship ever to arrive at a North American port docked at the southern tip of Los Angeles, a sign of the rapid changes underway in the global shipping industry.

The CMA CGM Benjamin Franklin, which arrived on December 26th at the Port of Los Angeles on a maiden voyage from China and South Korea, can carry nearly a third more cargo than the largest ships that currently call at the San Pedro Bay ports.

In an effort to move more cargo on less fuel, ocean freight carriers are in a race to build megaships with much larger capacities than the typical ships calling at U.S. ports. The average container ship being built now is nearly three times the size of the average a decade ago.

The rapid increase in vessel size has posed challenges for ports around the world, which now must contend with enormous volumes of cargo arriving at once. The ports of Los Angeles and Long Beach, the nation’s two busiest seaports, have been among the first in the United States to deal with the advent of larger ships.

Both ports are in the midst of hundreds of millions of dollars’ worth of projects to deepen channels and expand terminals to adapt to the changing world of shipping.

In early 2015, ports along the West Coast faced huge delays due to a contract dispute between the members of the dockworkers’ union and their employers — terminal operators and shipping lines. The impasse led to a partial shutdown of 29 West Coast ports and enormous cargo backlogs.

Even before the labor strife, the arrival of larger ships and other operational changes in the shipping industry had begun to snarl traffic at Los Angeles and Long Beach.

Despite the slow start to the year, cargo volume at both ports has picked up significantly.

Jock O’Connell, an international trade economist, said the arrival of the CMA CGM Benjamin Franklin is a sign that at least one shipping line is satisfied with the West Coast ports’ ability to handle increased cargo loads. He said the San Pedro Bay ports are now moving cargo more efficiently and are better at handling larger ships than they had in the past.

The ship was scheduled to depart the Port of Los Angeles on December 30 and head to Oakland, where it was to stop before heading back to Shanghai.

A Massachusetts man’s dashboard camera captured the moment a large sheet of ice flew from the SUV in front of him, flipped through the air and destroyed his windshield.

Jeffrey Cote, who posted the video to YouTube, said he was driving on southbound Interstate 495 in the Haverhill area when the sheet of ice flew off the top of the SUV driving in front of him.

The video shows the ice sheet flip through the air, covering a large distance before crashing directly into Cote’s windshield.

Cote said the shattered windshield covered him and the inside of the car with glass, but he was not injured.

(Failing to properly clear ice and snow from the roof and hood of a vehicle before driving is dangerous, as the following video shows. It can fly off of the vehicle and temporarily reduce visibility for other drivers and can sometimes cause accidents to occur. Failing to properly clear ice and snow off of a vehicle is not only very dangerous, but also against the law in many states.)

The legendary Harbin International Snow and Ice Festival, famous for its spectacular sculptures and giant replicas, is now officially underway in northern China.

The annual event, now in its 32nd year, is made up of several themed zones including a sculpture art expo and a lantern fair. This large sculpture began to take shape in December as workers carved it out of the ice.

The main attraction is the Harbin Ice and Snow World, which covers more than 750,000 square meters. Its magnificent structures required more than 330,000 cubic meters of ice and snow to create, according to a report in Chinese media.

Stunning as the works are in all their white glory, the best time to go is at night, when when the sculptures are lit from the inside. The capital of northeast China’s Heilongjiang Province, Harbin is a bitingly cold city with January daytime temperatures ranging from minus 13 to minus 23 Celsius.

Due to Harbin’s close proximity to Russia, its northern neighbor’s influence permeates everything from architecture to food.

Since 1985, the Harbin International Snow and Ice Festival has grown to become one of the biggest snow festival destinations in the world, joining the ranks of the Sapporo Snow Festival in Japan, Canada’s Quebec Winter Carnival and Norway’s Holmenkollen Ski Festival.

Depending on weather conditions, the festival usually lasts until late February.

From The Los Angeles Times, UPI and CNN.