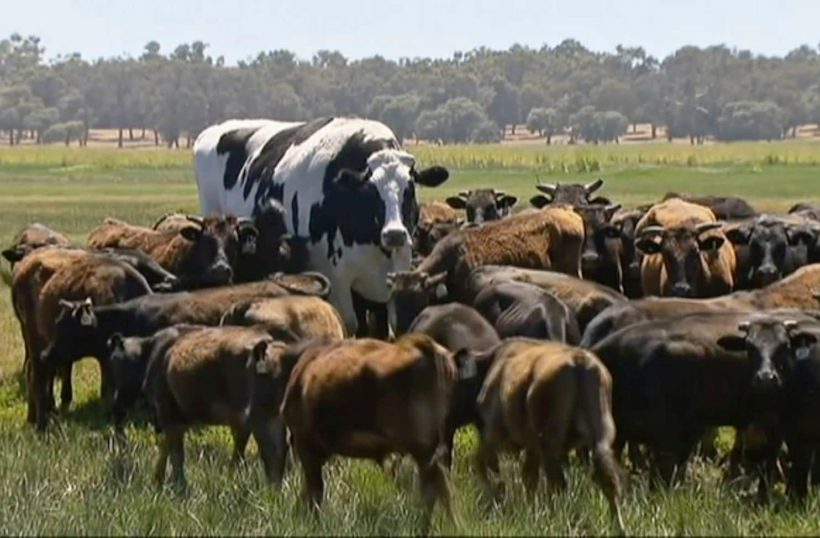 In this image made from video taken Nov. 15, Knickers the steer is shown in a paddock with a cow herd in Lake Preston, Australia. The enormous steer in the state of Western Australia has avoided the abattoirs by being too big. The 6-foot-4 bovine is believed to be the tallest in the country and weighs about 1.4 tons, local media reported. (Channel 7's Today Tonight via AP)

(By Jason Bitte, Nov. 28, The Washington Post) – A Holstein by the name of Knickers has captured the heart of the Internet by standing horns and shoulders above a herd of cattle on a farm in Australia.

And there’s no arguing that the lad is large.

At the shoulder, Knickers stands a mighty 6’4”, which means he’s two inches taller than Arnold Schwarzenegger. And he weighs roughly 2,800 pounds.

Which is to say, Knickers is big. But also that his bigness is relative to whatever he is being compared to.

“This story needs some perspective,” said Aniek Bouwman, an expert in animal breeding and genomics at Wageningen University in the Netherlands.

For starters, she said, it’s important to note that Knickers is not a cow but a steer, and that males are typically quite a bit larger than females. (Note: Only females that have had at least one calf are referred to as “cows” in cattle circles.) But his breed is also important, Bouwman said.

Male Holsteins tend to top out at just under 6 feet in height, while other breeds, like the wagyu cattle that surround Knickers in the now-famous photos of him, usually come in under 4.5 feet. In other words, Knickers is a large specimen, but he looks larger because he’s standing among a herd of Danny DeVitos, not a herd of Arnold Schwarzeneggers.

Age is also a factor. Knickers is seven years old, which is rather long in the tooth for a steer. The animals with which he was pictured are all around one year old, his owner told the New York Times.

“Steers are usually destined for slaughter by the age of three,” said Craig Hickman, a dairy farmer in Ashburton, New Zealand, who added that nearly everyone he knows has been sending him reports about Knickers. “So at seven, he’s had time to pack on an awful lot of weight.”

In fact, Knickers’ extreme proportions may have been something of a self-fulfilling prophecy. After a few years of growth, the animal had become too large to put through a processing facility, according to his owner, Geoff Pearson.

Age and breed aside, Knickers does seem to have something a little extra going on. Which is interesting, Pearson said in an interview, because the steer’s parents weren’t particularly large, nor was he noticeably different at birth.

“He was just a run-of-the-mill calf that’s turned into a giant,” said Pearson, who owns a third-generation cattle farm in Myalup, a small town in Western Australia.

Danniel, another humongous Holstein in California that was roughly the same size as Knickers, died this year from a calcium deficiency. According to news reports, Danniel consumed 100 pounds of hay, 15 pounds of grain and 100 gallons of water a day. He’d lived to be eight years old.

Knickers has shown no sign of health problems, but Pearson said he won’t be surprised if carrying all that weight catches up to the steer eventually. And while it’s been fun talking about his unusual animal to journalists from various countries in recent days, Pearson said, he’s got more pressing matters.

“Yeah, look, we run a reasonable cattle operation,” he said. “We like the exposure Knickers has gotten, but we’ve got a day-to-day operation to continue on with.”

In other words, don’t get your knickers in a bunch, people. It’s just a big steer.