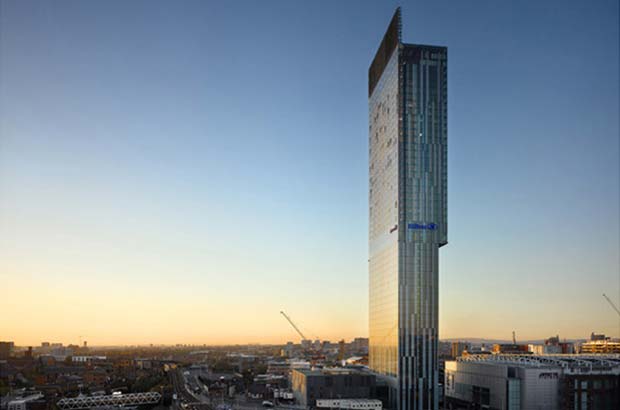 Beetham Tower in Manchester, England, has a reputation for howling, humming and whistling every time the wind picks up.

The skyscraper is irritating residents due to a ghastly howling noise it makes every time the wind blows because of a glass blade built at the top.

As this astonishing new footage (below) shows the £150 million ($226 million) building produces a high-pitched hum which alternately annoys and scares those living in the area.

The video was taken on Sunday, November 29th, when the city faced gale-force winds:

Residents in the city took to Twitter in droves last week to post about the eerie humming coming from the 554-ft building.

The 47-floor structure is one of the thinnest skyscrapers in the world, with a height to width ratio of 12:1 on the east-west facade.

The blade on the south side of the building which is thought to cause the howling during windy weather acts as a façade overrun, accentuating its slim form and it also doubles as a lightning rod.

The hum has been recorded as a B below middle C and gets louder the harder the wind blows.

Engineers have scaled the 47-floor tower to try and carry out repairs and modifications to reduce the din generated by its glass blade, but to no avail.

Foam pads were installed in 2007, aluminum nosing in 2007 and further work done in February 2010 but attempts to eradicate the noise permanently have been unsuccessful.

A man who discovered a five-foot goanna climbing across the side of his house in Australia said he “couldn’t have been more shocked if a Martian had landed.” Eric Holland, 80, was working in the shed in his back garden when he heard a banging noise and emerged to discover the giant reptile splayed across the side wall of his house.

“It blew the cobwebs out of me,” he told ABC News.

“He climbed up the bricks and got under the eve and his tail was twitching and hitting on the pipe… My yellow streak started to show and I jumped back in the shed.”

This goanna was thought to be a lace monitor, a native Australian reptile, which can grow to up to about seven feet in length. For the most part goannas are wary of humans, but are considered dangerous on account of their sharp teeth and claws.

Mr Holland, who lives in Albury in New South Wales, said the goanna quickly left the property and has not been seen since.

He took a photograph of the creature and was surprised when it made the local paper, though the image has since gone viral on social media.

“I couldn’t have been more shocked if a Martian had landed,” he said.

“I’ll be wearing my long pants and my big boots outside, that’s for sure.”

From wikipedia on goannas: