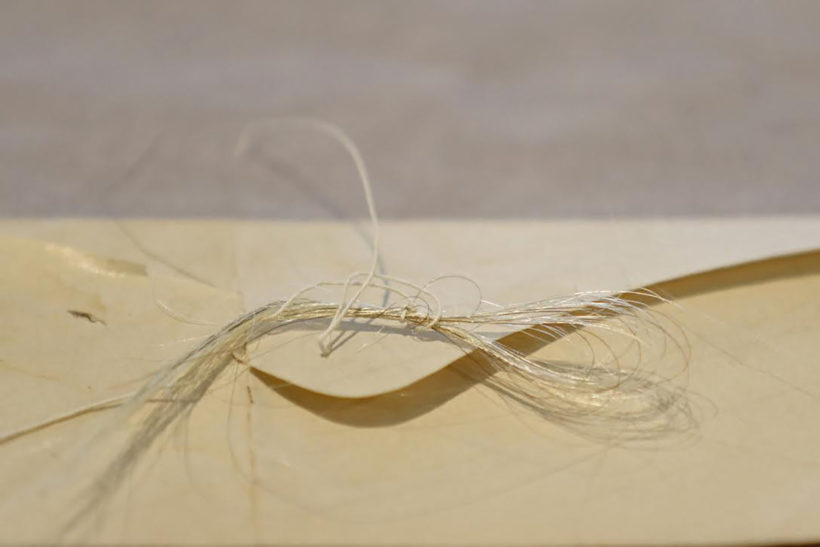 (by Brigit Katz, Smithsonian Magazine, Feb. 16) – In December, an archivist at Union College in Schenectady, New York, was sorting through some of the college’s oldest books and records when he spotted an 18th-century, leather-bound almanac that had never before been catalogued. The book was titled Gaines Universal Register or American and British Kalendar for the year 1793, and its pages were filled with population estimates for the American colonies and comparisons of various coins.

The almanac might not make for the most thrilling historical read, but as Sean Rossman reports for USA Today, inside the book was a fascinating relic: a lock of hair that, according to some experts, was snipped from the head of George Washington.

The book containing the hair is believed to have belonged to Philip J. Schuyler, the son of General Philip Schuyler, one of the college’s founders and a personal friend of Washington. “Philip Schuyler’s,” an inscription in the book reads, according to a Union College press release, “a present from his friend Mr. Philip Ten Eycke New York April 20, 1793.”

As the archivist, catalogue and metadata librarian John Myers, was paging through the almanac, he noticed a small envelope tucked into the front cover. Inside were several strands of gray hair, tied neatly together with a single thread. Written on the envelope were the words “Washington’s hair, L.S.S. & … GBS from James A. Hamilton given him by his mother, Aug. 10, 1871.”

But experts have reason to believe that the hair did indeed once belong to the Washington. Union College staff consulted with John Reznikoff, a manuscript and documents dealer who has collected the illustrious locks of Washington, Abraham Lincoln, Beethoven, Napoleon and other historical titans. The hairs at Union College can’t be subjected to DNA analysis, which would destroy them, but based on his examination of several photographs, Reznikoff is as sure as he can be that the strands hail from the head of the nation’s first president.

“Without DNA, you’re never positive, but I believe it’s 100 percent authentic,” Reznikoff says, according to the Union College statement.

How did a Founding Father’s follicles end up in a dusty almanac stored at Union College? Experts aren’t entirely sure, but it’s likely a convoluted story, one that reads like a “who’s who” of the Revolutionary era. Susan Holloway Scott, an independent scholar and author…says in the statement that she thinks it is “quite possible” that Washington’s wife, Martha gave a lock of her husband’s hair to Eliza Hamilton, the wife of Alexander Hamilton.

The couples were close friends, and in the 18th and 19th centuries, it was common practice to give locks of hair to loved ones as a gift. The Smithsonian, in fact, is home to a framed display containing the hair of the first 14 American presidents. The locks were likely gifted to friends and family members.

Eliza Hamilton was the daughter of General Philip Schuyler, the Union College founder, and the sister of Philip J. Schuyler, who owned the recently discovered almanac. Holloway Scott thinks Eliza passed the lock of hair onto their son, James Hamilton, who in turn distributed several strands to his granddaughters, Louisa Lee Schuyler and Georgina Schuyler. Recall the inscription on the envelope containing the lock: “Washington’s hair, L.S.S. & … GBS from James A. Hamilton given him by his mother, Aug. 10, 1871.”

It isn’t clear why the hair was placed inside a book, or how that book came to Union, but the Schuyler family certainly had close ties to the college. India Spartz, head of special collections and archives at Union’s Schaffer Library, is now working to preserve the hairs, which the college plans to put on display.

“As an archivist, we come across interesting material all of the time,” Spartz says in the college press release. “But this is such a treasure for the campus.”

Officials at Lincoln Elementary School in Louisville said 556 people, including students and faculty members, donned stovepipe hats and chinstrap beards to break the record for most people dressed as Abraham Lincoln in one place.

“We admire Abraham Lincoln,” Principal Susan French-Epps told WLKY-TV. “We’ve studied his contributions that he has made for all citizens and appreciate the opportunity to celebrate the month of his birth and give him some love on Valentine’s Day.”

The school is submitting records and evidence from the event to Guinness, which lists the current record as 250 Abe Lincolns.

[Larry Elliott, a Lincoln impersonator, also attended the event, where he delivered the Gettysburg Address to the children. He held a cake as the students sang “Happy Birthday.”].