If these exist, what else is in the ocean 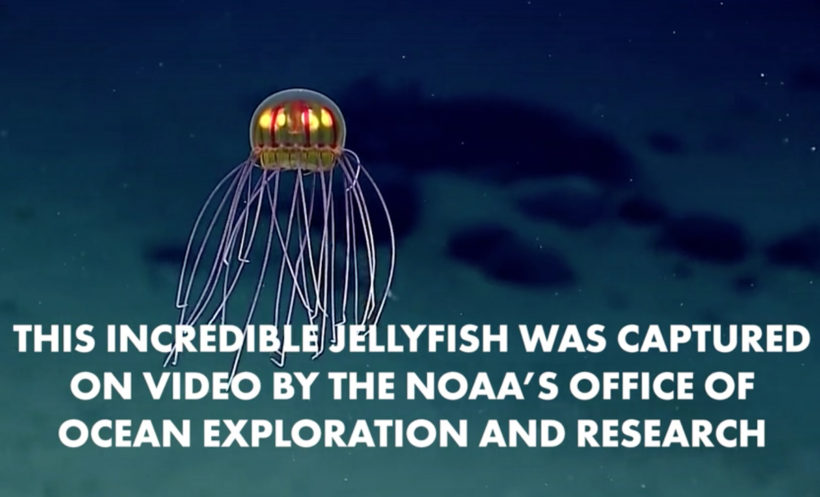 Researchers captured an incredible jellyfish on camera in the depths of the Mariana Trench.  The Mariana Trench is located deep in the Pacific Ocean between the Philippines and southern Japan.

(from OceanExplorer.NOAA.gov) – The stunningly beautiful jellyfish was seen during a dive on April 24, 2016, while exploring the informally named “Enigma Seamount” at a depth of ~3,700 meters (2.3 miles).

Note the two sets of tentacles — short and long. At the beginning of the video, you’ll see that the long tentacles are even and extended outward and the bell is motionless. This suggests an ambush predation mode.

Video courtesy of the NOAA Office of Ocean Exploration and Research, 2016 Deepwater Exploration of the Marianas:

Genesis 1:21 – “So God created great sea creatures and every living thing that moves, with which the waters abounded, according to their kind, and every winged bird according to its kind. And God saw that it was good.”

(Reuters) PORTUGAL – A young man’s attempt to take a selfie snapshot with the statue of a 16th century Portuguese king ended badly when the 126-year-old statue crashed to the ground and shattered, police said on Wednesday, May 4th.

The man, whom police did not identify, accidentally toppled Dom Sebastiao’s statue after climbing up to its pedestal outside the ornate Rossio railway station in central Lisbon just before midnight on Tuesday. He tried to flee the scene but police caught him. He will appear before a judge at a later date.

The child-sized statue of the sad-eyed, sword-wielding king stood in a niche between two horseshoe-shaped arches at the entrance to the station. Completed in 1890, the station is a protected monument.

Dom Sebastiao, who ruled between 1557 and 1578, is a tragic figure in Portuguese history, dying in battle at the age of 24 during a crusade of his own making in Morocco.

His body was never properly identified, giving rise to a legend that the king would one day return to claim his throne and save Portugal in times of trouble.

(CBS News, New York) – New Yorkers like to brag they’ve seen it all. But in Central Park, there’s one thing that still turns heads. Cowards stop in their tracks, while the brave inch closer.

His name is Henry, and he’s an African tortoise.

His owner Amanda Green has had him for a couple years now, but lately she’s been feeling guilty that she can’t bring him to the park as often as she would like.

“So I wanted to hire a walker, just like a person with a dog would hire a dog walker,” Green said.
She posted an ad on Craigslist that read: “In search of a responsible animal lover…no tortoise experience necessary.” “I have a love for animals, especially reptiles,” one response read. “I find anything that can’t regulate its own body temperature endearing.”

Green said she was hoping maybe two or three people would apply, but instead she got nearly 400 emails — from as far away as Australia.

It’s not exactly just a trip to the park and back. “No, he strolls to the park in a stroller because otherwise it would take a long time,” she explained. “I have a stroller for him, to get him to the park.”

Now that’s an ugly baby. The whole thing creates such a spectacle, Green said, often the hardest part of the job is controlling the paparazzi. But the applicants were not dissuaded.

“I’m currently taking care of an 11-year-old boy, so I know what it’s like to try to keep track of something,” one applicant said.

“I’d like to hang out with a tortoise,” said another.

Eventually, Green narrowed it down to four. Finally, she settled on a part-time pet store worker named Amalia. She starts next week.