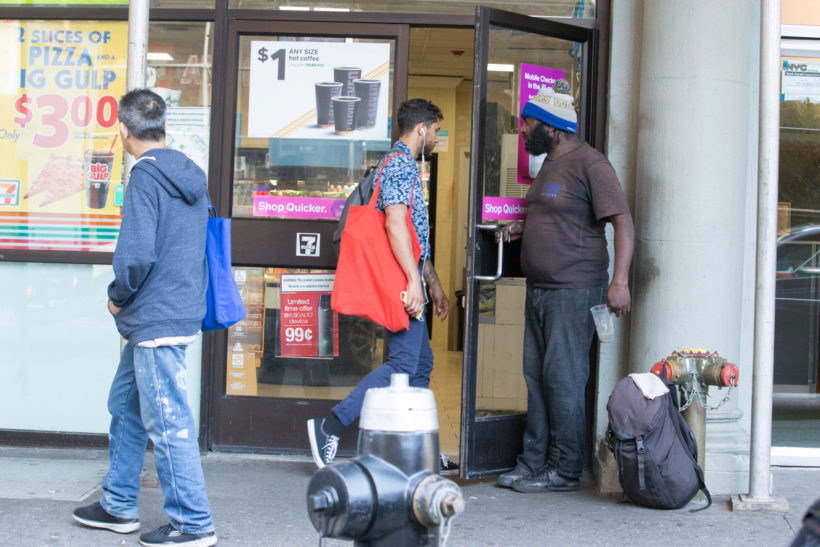 A homeless man holds the door of a 7-Eleven on Lafayette and Walker streets in Manhattan. (Photo: William Farrington)

City 7-Elevens have been blasting classical music at people hanging around outside the stores, part of a national effort by the chain to disperse vagrants.

But all that cacophony had no effect in New York.

“It didn’t work,” said the manager of the 7-Eleven on Lafayette Street in Noho. “Sometimes they loved the music!”

The store, which has battled a shoplifting problem and complaints about the homeless, put up an outdoor speaker early this year and pumped up the jams for about four months because the homeless “stand outside and they do bad things,” the manager said.

“In the morning, we can’t play too loud because there are offices,” he said. “They were loving it, and we didn’t see them moving [away].”

Switching up the music didn’t help.

“We could mix and match. We tried but it didn’t work out,” he said.

It was a similar story at the 7-Eleven on West Third Street in the Village.

“We used [the music] but we stopped a few months ago,” one worker said.

“I didn’t mind!” said Washington. “I was out here doing my pirouettes.”

Another 7-Eleven store, near 34th Street and Eighth Avenue, cranked up the noise last year, joining locations in places like Washington, DC, Dallas and LA.

In North Hollywood, the loud strands of “Pachelbel’s Canon in C” bellow from a store on Camarillo Street below a neon 7-Eleven sign.

“They use it as a deterrent for loitering,” night shift cashier Lydia Erdman told the LA Times. The homeless people “still show up, but our customers like it better now. We had it pretty bad. It was an issue for a while.”

A regular customer said of the worker, “She’s terrorized every night.”

The company began the program several years ago, starting with stores that “had immediate needs,” said Kathy York, president of the Franchise Owners Association of Greater Los Angeles.

Most lamented the increase of homeless people outside their stores, saying it has hurt their businesses.

The corporate 7-Eleven offices supplies the money for construction and repairs, but some franchise owners have resorted to paying for speakers and music themselves.