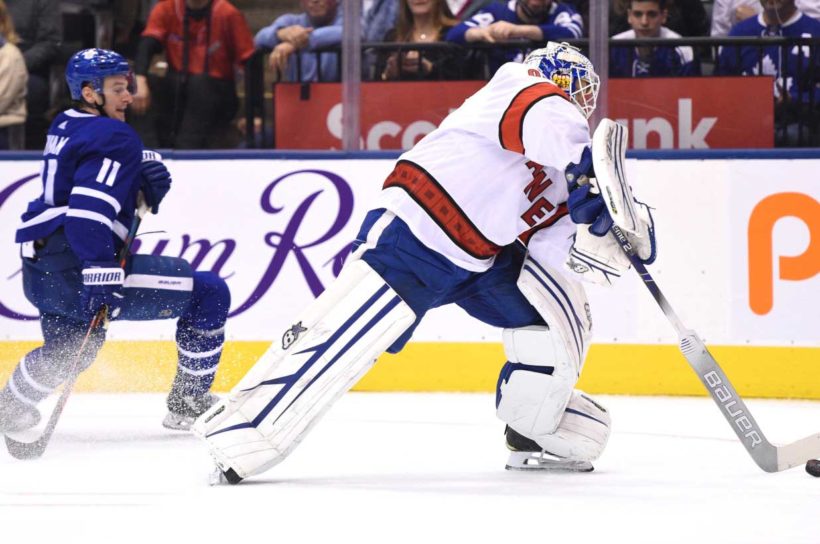 David Ayres was sitting in the stands at Scotiabank Arena when Carolina Hurricanes goalie James Reimer went down with an injury.

The on-call emergency netminder in Toronto, Ayers left his seat and got half dressed into his gear on the off chance something might happen to Carolina’s second option, Petr Mrazek.

Midway through the second period, Ayres noticed his cell phone started to blow up. What he didn’t realize was Mrazek had been hurt in a scary collision with Maple Leafs forward Kyle Clifford and was down on the ice.

Next thing the 42-year-old Zamboni driver knew, he was walking down the tunnel and into the spotlight.

And not long after, he had an improbable first NHL win. He is the oldest goalie in NHL history to win his regular-season debut.

Ayres allowed goals on the first two shots he faced before settling down and stopping the next eight in a suffocating defensive performance by his new teammates as Carolina picked up a stunning 6-3 victory over the Maple Leafs on Saturday night.

“I had a couple of text messages that told me to get in there,” Ayres said. “I hadn’t seen the footage (of Mrazek’s injury). I was in the media room by myself and a guy came in and said, ‘Get going. Get ready.’

Ayres, who had a kidney transplant 15 years ago and wasn’t sure if he would ever play hockey again, has been a practice goalie with the Leafs and the club’s American Hockey League affiliate, the Toronto Marlies, for the last eight years.

The native of nearby Whitby, Ontario, faces shots from professional players on an almost-daily basis during the season, but never thought he’d be called into service in an NHL game.

“These guys were awesome,” Ayres said. “They said to me, ‘Have fun with it, don’t worry about how many goals go in, this is your moment, have fun with it.’”

He did more than that, and was greeted with raucous cheers from the Hurricanes in their locker room after finishing a post-game TV interview.

Not long after the final buzzer, the Hurricanes were hawking T-shirts on Twitter sporting the stand-in goalie’s No. 90. …

“These guys,” Ayres said of what he’ll remember most. “How great they were to me. The crowd in Toronto was unreal. Even though I was on the other team they were so receptive. Every time I made a save I could hear them cheering for me.