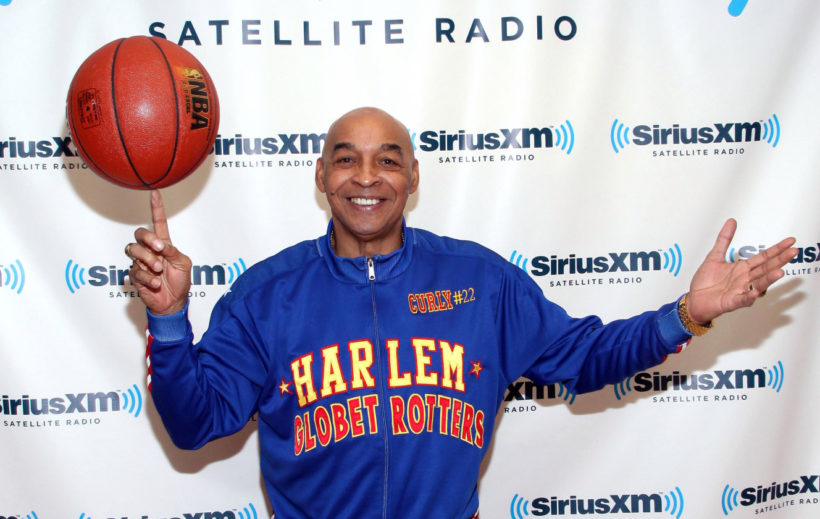 Fred "Curly" Neal played for 22 seasons (from 1963 to 1985) with the Harlem Globetrotters, appearing in more than 6,000 games in 97 countries. Following in the footsteps of Marques Haynes, Neal became the Trotters' featured ballhandler, a key role in the team's exhibition act.

(by Zach Braziller, New York Post) — Fred “Curly” Neal, the popular retired Harlem Globetrotter known for his fancy dribbling and outsized personality, died Thursday at his home just outside Houston. He was 77.

His college, Johnson C. Smith, announced the news on Twitter about the man known as “Curly” because of his shaved head that resembled Curly Howard of the “Three Stooges.” He was said to be dealing with failing health, but his passing was not believed to be related to the ongoing coronavirus pandemic.

“We have lost one of the most genuine human beings the world has ever known,” Globetrotters general manager Jeff Munn said in a statement released by the team. “His basketball skill was unrivaled by most, and his warm heart and huge smile brought joy to families worldwide. He always made time for his many fans and inspired millions.”

Born in Greensboro, N.C., Neal was a star college basketball player at Johnson C. Smith in Charlotte, earning all-Central Intercollegiate Athletic Association honors. As a senior, he averaged more than 23 points per game and led Johnson C. Smith to the CIAA crown.

After college, he joined the Globetrotters in 1963 and remained part of the team, which is known for entertaining fans with trick shots and awe-inspiring dribbling, for more than two decades. Across 22 years, he played more than 6,000 games in 97 countries. In 1985, he retired, and in 2008, his No. 22 was retired by the Globetrotters at Madison Square Garden, joining Wilt Chamberlain, Marques Haynes, Meadowlark Lemon and Goose Tatum. That same year, he was inducted into the North Carolina Sports Hall of Fame.

“For those who say the game has evolved? I say what’s old is new again!” Hall of Famer Isiah Thomas tweeted after hearing the news of Neal’s passing. “Distance Shot making and dribbling is back!! #CurlyNeal and #MarcusHaynes taught me how to dribble.”

Even after he retired, Neal still made appearances with the Globetrotters. He was a key part of their act, as their lead guard who would make wondrous dribbling maneuvers and match his elite basketball skill with a warm personality and constant smile. In his heyday, the team was very popular, appearing on “ABC’s Wide World of Sports,” “CBS Sports Spectacular,” “The Ed Sullivan Show,” “The Harlem Globetrotters Popcorn Machine,” “The Love Boat,” “The White Shadow” and “The Harlem Globetrotters on Gilligan’s Island.”

One of the first all-black teams in the 1920s, the Globetrotters helped break down social barriers, which was one reason Neal was so proud to be a part of the organization.

“Being a Globetrotter, especially during that time, was as much a responsibility as it was a job,” he wrote in an opinion piece for USA Today Sports in 2016. “We weren’t just entertainers. I truly believe that we helped ease many of the tensions that pulled at the country. It didn’t matter if you were black, white or whatever — laughing and enjoying our games made those barriers disappear.

“For the black community, the team was a special source of pride, even if it appeared as if we were the butt of the joke. The great Wilt Chamberlain used to say, ‘When you were a young black kid in the ’40s, you loved Joe Louis and the Harlem Globetrotters.’ ”

Neal is survived by his fiancée, Linda Ware, two daughters and six grandchildren. Funeral arrangements were not immediately announced.

Posted by the Harlem Globetroters on Curly Newl’s 74th birthday in 2017: