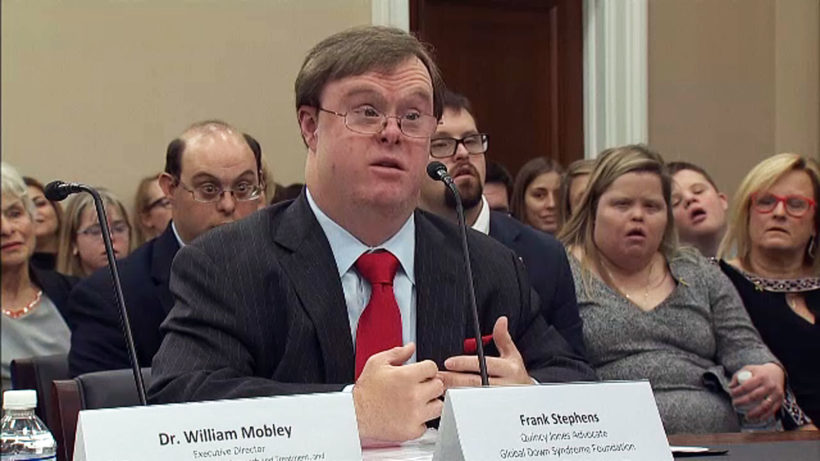 The video features Special Olympian and actor Frank Stephens addressing Congress in 2017 and giving a case for why children born with Down syndrome should not be aborted.

“I am not a research scientist; however, no one knows more about life with Down syndrome than I do,” Stephens said in the video. “Whatever you learn today, please remember this: I am a man with Down syndrome and my life is worth living.”

“Sadly, across the world, a notion is being sold that maybe we don’t need research concerning Down syndrome. Some people say prenatal screens will identify Down syndrome in the womb and those pregnancies will just be terminated,” he continued. “It’s hard for me to sit here and say those words.”

Stephens is very emotional in the video as he attempts to explain why children born with abnormalities should be given a chance to breathe their first breath.

“I don’t feel I should have to justify my existence,” Stephens said, “but to those who question the value of people with Down syndrome, I would make three points:

Kutcher captioned the post with the simple phrase, “Everyone’s life is valuable.” It quickly went viral, with more than 7.5 million views and 4,000 comments.

[Many abortion rights activists were not happy with Kutcher’s message and posted comments saying so.]

Watch the video of Frank Stephens’ 2017 testimony to congress that Ashton Kutcher posted:

[And on Friday, Feb. 1] Frank Stephens was interviewed on Fox & Friends.

“I’d like to thank my friend Ashton Kutcher for bringing back my testimony,” he said. “It’s like the walking dead because it just won’t stay down.”

Stephens said he doesn’t want to make abortion illegal, but instead wants to make it “unthinkable.”

He said, “My life is worth living because it is fantastic,” he replied. “I’ve gotten to travel all over the world. I get to workshop a play in New York. I’m going to be in two documentaries which will be on next month. And I have a lovely girlfriend, friends and a wonderful family.”