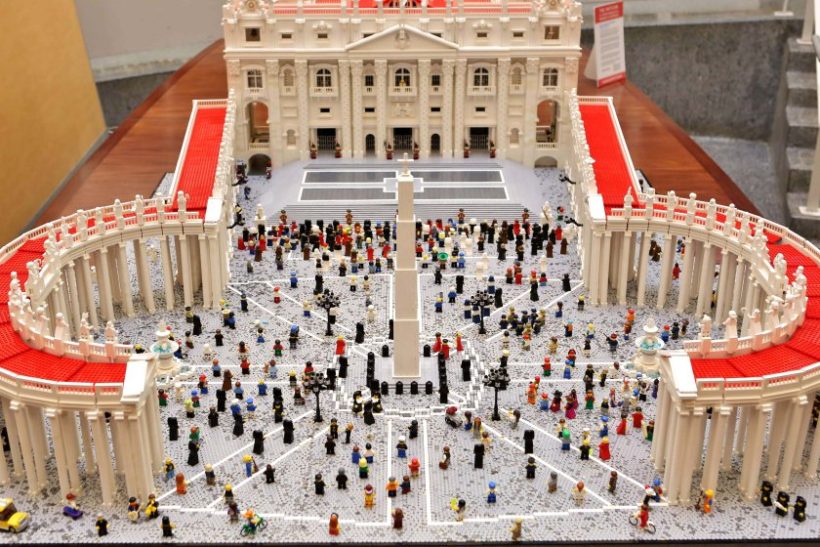 A Philadelphia museum is displaying a priest’s Lego replica of the Vatican in its atrium ahead of Pope Francis’ planned visit to the city.

The Franklin Institute said Father Bob Simon’s Lego Vatican — which the priest estimated contains about half a million pieces — serves to “unite” the current Art of the Brick exhibit and the upcoming Vatican Splendors exhibit.

Simon said it took him 10 months to build his creation using reference photos from books and the Internet.

“There was one photo in particular, it was a cover, a book jacket of a book I had that had a great picture of the facade,” Simon told CBS Philadelphia. “I used that for doing the facade, and I used Google Earth, as well.”

A desperate plea for help, two lost dogs and one happy ending.

That sums up the story of canine friends, Tillie and Phoebe, perfectly.

The two dogs ran away from their Washington state home last week without a trace. A basset hound named Phoebe is trapped in a cistern in Washington state. (Amy Carey/VIPP)

Five days after their disappearance, the Vashon Island Pet Protectors (VIPP) stepped in to help their distraught owner.

Amy Carey, a VIPP volunteer whose the first to respond to a lost dog call, made it her mission to find the canines. She was hoping someone, somewhere would see them.

Little did she know, Tillie would lead the way.

“We received a call from a community member reporting that for the past few days a ‘reddish’ dog had been coming up to them when they were out on their property and then promptly heading back into a ravine,” Carey reported on Facebook Monday.

So, with “a needle in the haystack hope,” Carey and her rescue crew made their way into the ravine. When Tillie’s name was called, the group could hear a faint one-woof response.

After following the sound of her barks, Carey spotted Tillie laying beside an old cistern with poor Phoebe stuck inside.

“This is an amazing story about Tillie being a true friend and heroine,” Carey told CBS News. “But it’s also about the importance of not giving up.”

Police in Columbus Ohio said thieves broke into a Verizon store, but the only items they managed to steal were fake phones used as display pieces. Columbus police said the early Wednesday burglary at the store caused significant damage to the store, but the only items stolen were fake phones installed for display after the store was previously targeted by thieves.

Police said the culprits used large rocks to break the glass back door of the shop and they cut or ripped the phony cellphones from display areas.

Investigators said the store’s real phones are locked in a vault by employees every night.

From CBS News, and UPI