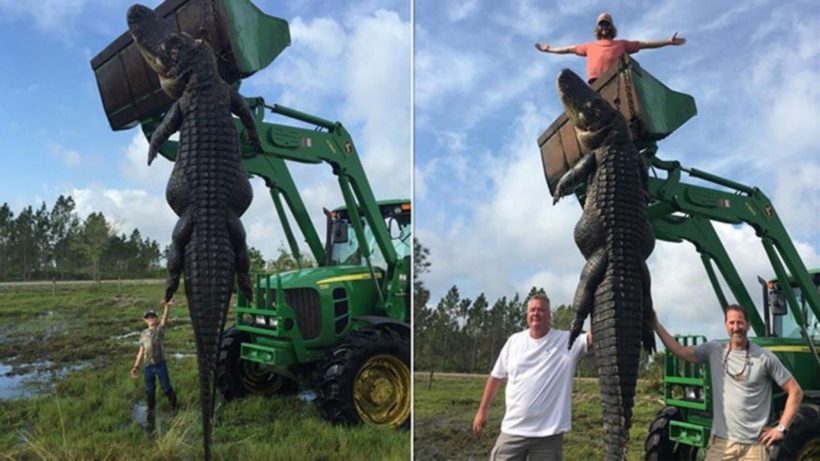 (New York Post) – A pair of Florida hunters bagged a 15-foot, 800-pound alligator Saturday and photos of the massive specimen have gone viral.

Lee Lightsey, the owner of Outwest Farms in Okeechobee, and hunting guide Blake Godwin discovered the alligator in one of their cattle ponds while on a guided hunt. They believe the gator had been feasting on the farm’s cattle.

“We … discovered the remains of what we determined to be cattle in the water. We determined that he was in fact attacking our livestock as they came to drink,” Godwin told Fox13.

The guide said Lightsey shot the gator as it surfaced about 20 feet in front of them. Godwin said the animal was so big that the pair had to use a farm tractor to pull it out of the water.

“It is hard to believe that something this big exists in the wild,” Godwin said. “Hunting is a way of life for us and we are very proud of it.”

Outwest Farms has been guiding hunts for alligators, wild boar and turkey for 18 years and Lightsey says on his website he’s been hunting all his life. According to Godwin, the largest alligator they had taken before Saturday’s hunt was just over 14 feet long.

The pair plan to donate the gator’s meat to charity and have the alligator taxidermied for display at their hunting shows and expos.

(London’s Daily Telegraph) – An American has found fame in Japan – after being hired to become the nation’s first salaried foreign ninja.

Chris O’Neill, 29, is the only foreigner among a new seven-strong ninja squad hired by a local tourism body in Aichi Prefecture, central Japan, to promote its ninja heritage.

O’Neill, who is based in Tokyo, was among 235 ninja hopefuls who inundated the authorities by applying to an unusual job advertisement seeking ninja in the region, as part of a tourism-boosting initiative.

In the advertisement, the ideal applicant was described as possessing an array of skills, from a mastery of backward handsprings to the ability to hurl star-shaped weapons known as shuriken, in addition to being happy to pose for photographs.

The job description, which was open to foreigners as well as Japanese, also said they should “enjoy being under the spotlight, even though he or she is a secretive ninja”. The final auditions received widespread coverage in the Japanese media, with as many as 85 per cent of applicants turning out to be foreigners keen to become modern-day versions of the feudal spies, according to AFP.

However, it was the acrobatic antics of O’Neill that reportedly impressed the authorities to such an extent that they created an extra spot for him to join the team.

“He has great acrobatic skill and the ability to speak in front of the public. He’s also passionate about promoting tourism.”

The new American recruit will work alongside six Japanese colleagues, including five men and one woman, as part of the new squad, earning a monthly salary of $1,665 (180,000 yen) on a one-year contract.

(CBS News) – Got rats? Meet the exterminators. Hundreds of cats are being hired and put to work at local homes and businesses,CBS Chicago reported.

There’s a waiting list for the cats, and a lot of the people on that list live near soon-to-be demolished buildings like the Children’s Memorial Hospital in in Lincoln Park. When the building comes down, the rat problem is expected to get worse. Venkman lives and labors among the barrels of beer and sacks of grain in the Empirical Brewery.

But Venkman and his three feral cat friends were hired to be on full-time rat patrol.

“We would find little holes, scratched into bags of grain,” McCown said.

He got fed up with the rats chomping away and turned to the Cats At Work program at the Tree House Humane Society.

“They have free reign throughout this open brewery area,” McCown says.

Their scent is a natural deterrent.

Victoria Thomas adopted three working cats after she and her neighbors spent $5,000 in exterminations and nothing worked.

“We would BBQ and the rats would walk across our feet,” Thomas said. “We would sit on our deck and we’d hear the little feet crawl across the deck.”

Her new exterminators are street cats.

Like the 500 other working cats in Chicago, they were scheduled to be euthanized, but then rescued from animal shelters and sent to places like businesses, factories and homes.