Birds of prey will scare the gulls away 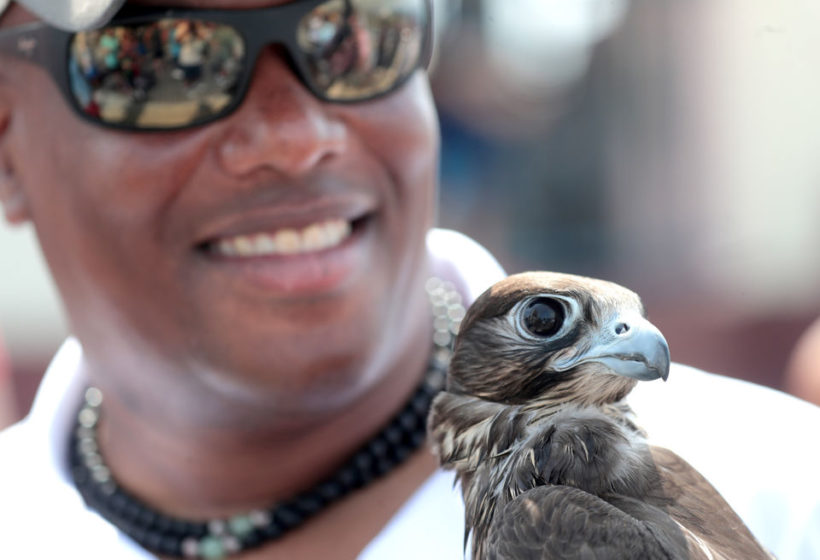 Leigh Foster, of East Coast Falcons, holds Tilda, a hybrid falcon, who will fly over Ocean City from 10 a.m. to 10 p.m in order to scare away seagulls, Monday, August 5, 2019. (Tim Hawk | NJ Advance Media for NJ.com)

(by Leah Mishkin, NJTV) – There’s going to be a new sheriff in Ocean City, armed not with a gun but wings and talons. And the job will be to help the beach town on the Jersey Shore rid itself of the army of hungry seagulls that plague beachgoers and patrons of boardwalk restaurants.

The thinking is that the mere presence of the raptors, a natural seagull predator, will scare the scavenging birds away — not that they will feed on the gulls.

PJ Simonis, a falconer with East Coast Falcons , was walking along the Ocean City boardwalk this week with one of his charges. A flock of gulls circled noisily in the sky above him, obviously aware of the potential danger.

“She’s a new hawk, 17 weeks old,” he said of OC, a bird of prey named for Ocean City. “We’re getting her acclimated to the boardwalk. There’s a lot of sights and sounds and strollers and everything going on here, so she’s going to learn on the job.”

Every person on the boardwalk seemed to have a tale of seagull mayhem.

“He was eating his pretzels the other day and as he was putting it in his mouth a seagull came over and took the pretzel out of his hand and hit my wife in the face with his feathers,” said one man. “Can you say that’s a problem? Yeah.”

Another woman visiting from Boston said her 4-year-old daughter’s friend was bitten by a seagull that was going for her grilled cheese sandwich.

Bill McClafferty, the executive director of the Ocean City Humane Society, said officials want to try a program that would protect the public and keep the gulls safe.

“We met with the owner of East Coast Falcon and the other employees and they guaranteed us they feed their birds before they take them up to the boardwalk and since they’re feeding them, they’re not interested [in the seagulls] — they’re just chasing them away,” he said.

Simonis said his company will be using a combination of hawks, owls and falcons to clear the area of seagulls. He will be in town from 10 a.m. to 10 p.m., he said.

He explained how the gulls react when they spot the raptors.

“Their life depends on it so that’s how they’re wired. Just the flap of her wings and the shape of her wings — everything she does just triggers this response in the birds.”

OC will graduate from walking the boardwalk with Simonis to flying solo in about a week.

“So that call they’re starting to do, that’s letting all the other seagulls know there’s a raptor in town,” Simonis said as the gulls circled above. “So what they’re going to do is call, circle around, get eyes on the raptor and then they’re going to move out.”

Simonis discussed how each type of his birds is deployed in the effort. All raptors prey on seagulls, he said.

Of hawks, he said: “We use them to go rooftop to rooftop.”

“They’ll go out and ring up to 3,000 feet and hang out up there and wait for some movement,” he said. “And at that point once they’re up 3,000 feet there’s basically nothing on this island that isn’t in their danger zone. So they can come down and strike anything, so all the [gulls] are very careful and nervous.”

The owls are there to play a sort of mind game with the gulls.

“Here in New Jersey we don’t have any owls that aren’t nocturnal, so the only time the seagull would see an owl in the daylight is if the owl was extremely, extremely hungry, so that really twists their mind a little bit and they panic over that stuff,” said Simonis.

Efforts are made to keep the raptors from viewing the gulls as food.

“What we do is control their weight so they’ll actively pursue the birds, but they’re really not looking to kill them,” he said. “And then we call them down for dinner. …