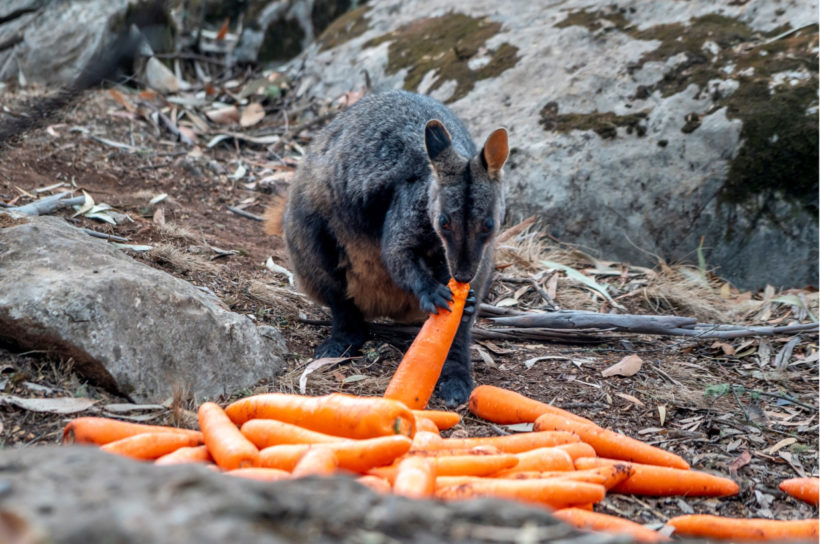 (By Jorge Fitz-Gibbon, The NY Post, Jan. 12) – Rescue workers in Australia are bombarding secluded parts of the fire-ravaged Land Down Under — with veggies.

“Operation Rock Wallaby,” commissioned by the government of New South Wales, has dropped thousands of carrots and sweet potatoes to endangered critters who fled their natural habitats due to the raging fires — and are in danger of starving to death.

“The wallabies typically survive the fire itself, but are then left stranded with limited natural food as the fire takes out the vegetation around their rocky habitat,” the state’s environment minister Matt Kean said Sunday, per ABC News.

“The wallabies were already under stress from the ongoing drought, making survival challenging.”

Rock wallabies are one of several endangered species seriously threatened by the wildfires, which have scorched more than 25 million acres and killed 28 people since October.

The fires have had a devastating impact on Australia’s wildlife, killing more than 1 billion animals, experts predict.

But cooler temperatures and milder winds turned the tables on the wildfires Sunday, fire officials said.

“The fire took a major run about seven or eight days ago, and with the weather changing now, the weather settling down, the fire has settled down,” New South Wales firefighter Dale McLean said.

“The fire behavior has changed, so we’re able to get in front of the fire now, get on the offensive.”