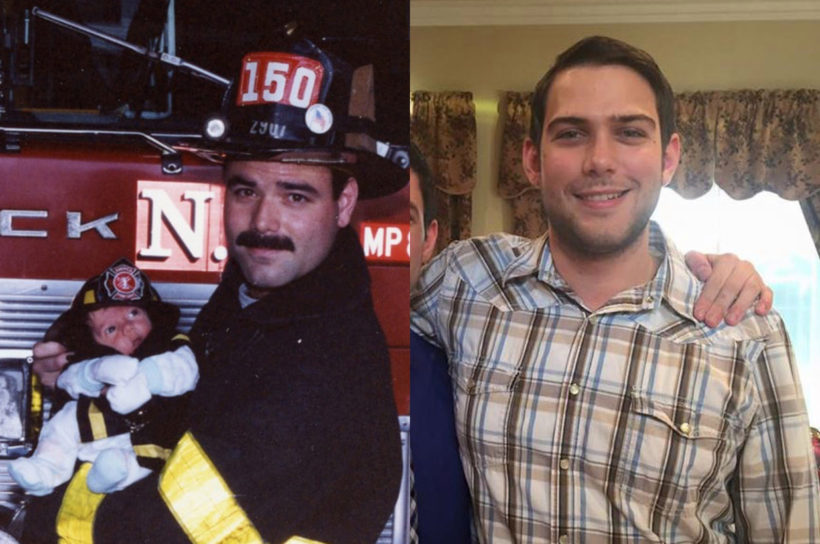 (By Dean Balsamini, Sara Dorn and Susan Edelman, NY Post) – The children of FDNY firefighters who perished on 9/11 are blossoming into a new generation of Bravest.

On the eve of the 18th anniversary of the September 11, 2001 terror attacks, the current FDNY Academy class, set to graduate in two weeks, includes 13 members — 12 men and one woman — whose firefighter fathers were murdered on 9/11, The Post has learned.The class includes siblings — two sons of one fallen firefighter, and the son and daughter of another hero.

The historic group of at least 16 “legacy” probationary firefighters also includes the son of an NYPD officer killed on 9/11, and the sons of two firefighters who died due to illness linked to their rescue and recovery work at Ground Zero.

This FDNY class has the most “legacy” members since 9/11, though dozens of other sons — and one daughter — have previously joined the force, said spokesman Jim Long.

“Bravery runs in these extraordinary families who have sacrificed so much for our city. I’m proud of the commitment these probies have already demonstrated to the department and look forward to celebrating with them at their graduation,” Fire Commissioner Daniel Nigro told The Post.

“I think it’s a great tribute to their dads,” said Gerard Fitzgerald, president of the Uniformed Firefighters Association. “It’s quite inspirational to hear that they’re following in their fathers’ footsteps.”

The FDNY barred the probies from speaking with reporters pending their graduation ceremony Sept. 24, but relatives were elated.

“Being that they are the youngest, I’m more concerned. They wanted to honor their father, to help people like he did. Even if he hadn’t died, they would have become firefighters. Since they were little kids, the fireman was Santa Claus. The fireman organized the picnics.”

James Foti, 22, son of Robert Joseph Foti of Ladder Co. 7, is thrilled that his older brother Robert, who just turned 27, is joining the FDNY.

“I know he’s happy. He can’t wait to start the next chapter in his life,” said James, who was 4 years old when their dad died — so young that his mom converted videocassettes to CDs so he could hear his dad’s voice. Robert Jr. was 9.

“When he got in, I got real emotional. It was always about joining the FDNY,” said James, who has a landscaping business in Long Island but plans to take the next FDNY entrance exam in four years.

“There are no negatives. We know the risks. We always liked helping people.”

Another set of siblings in the FDNY class, Anthony and Leonard Ragaglia, Jr., were 7 and 10 years old, respectively, when their dad, Leonard, 36, a member of Engine Co. 54 in Manhattan, perished.

The strapping Staten Island resident was known for his wicked sense of humor and competitive nature. The elder Ragaglia was the third of 12 siblings and the first to become a firefighter like his dad, but before joining the FDNY he served eight years as an NYPD officer.

Raised in Staten Island, the elder Ragaglia took the firefighters’ exam as soon as he could. He joined the FDNY in 1993. He told his family that inspecting St. Patrick’s Cathedral was one of his duties, but never mentioned scrawling his childhood nickname “Rags” on a dusty window in one of the spires.

In 2006, Monsignor Robert Ritchie, the St. Patrick’s rector, decided that Ragaglia’s name and those of three other firefighters who died on Sept. 11 would forever remain etched on the windows.

Anthony sports a colorful tattoo of his dad on his left arm.

The veteran firefighter retired in 2002 from Ladder Co. 76 in Tottenville. His son, Thomas, is now an FDNY probie.

“He wanted to be like his father and I’m very happy for him. I pray for him,” Thomas’ grandmother, Stella Heedles, told The Post.

“I’m very proud and I love him with all my heart. He’s a good boy. … It’s what he wanted to do and I’m so happy he made his goal.”

As a kid, Thomas and his two brothers would shovel her sidewalk whenever it snowed, his grandma recalled.

On the 9/11 anniversary Wednesday, she will think of her fallen son: “I’m going to be very strong.”

As for her grandson, she said, “I hope God is always watching over him.”

The other sons of fallen firefighters and an NYPD officer are: