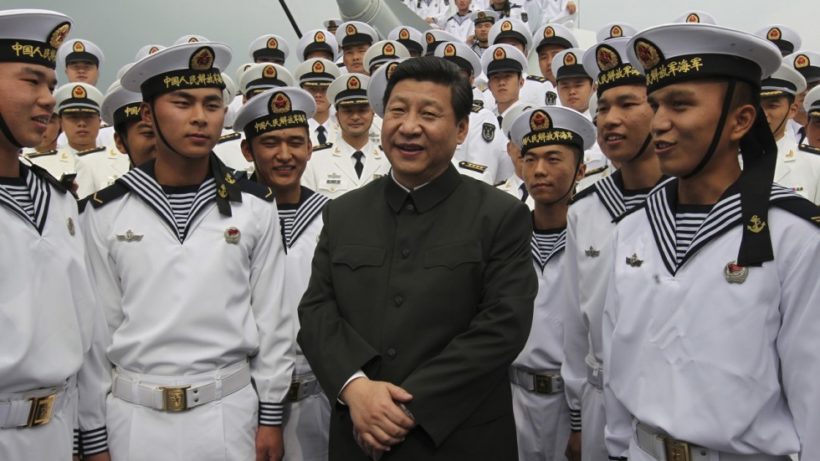 Chinese President Xi Jinping stands with PLA sailors. [*The PLA (People's Liberation Army) is the armed forces of the People's Republic of China and the Communist Party of China.].

The new aircraft carrier, temporarily named Type 001A, sailed out at around 7 a.m. in Dalian, in the northeast province of Liaoning, according to reports in Chinese state media.

The 50,000-tonne ship will become the country’s second aircraft carrier, and the first to be entirely built and designed inside of China, when it joins the PLA navy* sometime before 2020. [*The PLA (People’s Liberation Army) is the armed forces of the People’s Republic of China and the Communist Party of China.]. The carrier’s maiden sea trial follows a speech given by Chinese President Xi Jinping on April 12, in which he announced plans to build a “world-class” navy under the banner of the Chinese Communist Party.

China’s first carrier, the Liaoning, a retrofitted Soviet-era vessel bought from the Ukraine, was hailed as the fulfillment of a “70-year dream” of the Chinese nation when it launched to much celebration in 2012.

But experts said while the new aircraft carrier will dramatically boost China’s military power in the Asia region, its technology was still outdated and lagged far behind the world’s naval superpower, the United States. …

China’s second aircraft carrier will be “modernized” compared to its first, experts said, with a design that’s bigger and heavier to allow it to carry more planes.

The basic design for the new aircraft carrier is clearly modeled heavily on the Liaoning, including the signature ski-jump inclination at the front from which aircraft lift off.

The ship, which is 1,033 ft in length and 246 ft wide, uses conventional rather than nuclear propulsion, and is believed to displace 50,000 tonnes, according to reports in China’s state media.

But expert analysis of pictures and satellite images of the new China-built vessel reveals it has been altered in subtle ways, possibly allowing it to accommodate up to eight additional aircraft.

By comparison, the Liaoning is thought to currently carry around 30 warplanes, including fixed wing aircraft and helicopters.

[Naval experts said the Chinese engineers and designers behind the warship had studied the most advanced military technology used in the US, as well as the former Soviet Union, and tried to incorporate it into the new carrier to meet the practical needs of the PLA Navy.].

According to Peter Layton, visiting fellow at the Griffith Asia Institute, the Liaoning was intended to act as more of a training vessel, whereas the new ship is likely to be deployed in combat missions, positioning China alongside a select number of countries with global naval capabilities, including Russia, France, the United States, and the United Kingdom.

As of this year, the United States Navy fields 11 nuclear-powered aircraft carriers, more than any other nation in the world.

The US ships feature “catapult” technology, in which a gear attached to a steam-powered piston or an electromagnetic rail gets aircraft up to flight speed as they leave the deck.

Aircraft launched by catapults can get airborne and with greater quantities of fuel and ammunition, giving them an advantage over Chinese planes, which rely on their own power when lifting off from the Liaoning’s ski-jump. …

2. For CHINA:
a) list the who, what, where and when of the news item
b) What announcement did President Xi make prior to the launch of the Type 001A?
c) This is the first aircraft carrier China has built. The communist country has one other carrier. How did they obtain that vessel?
d) How/why are U.S. aircraft carriers still far superior to this newly built Chinese vessel?
e) Read the “Background” below. What do you think the U.S. should do going forward to ensure our naval (and overall military) superiority over China’s communist regime in the coming decades?

China may still be a long way from presenting a global challenge to the US Navy, but as a regional power its military program is moving fast.

With a military budget in 2018 of $175 billion dollars, up 8% on the year before, the Chinese military is pushing ahead rapidly with its modernization drive.

Between 2010 and 2017, the Chinese Navy increased its complement of ships from 210 to 320, Boston College professor of political science Robert Ross told CNN, including another 18 in 2016 alone.

By comparison, the active US fleet currently sits at approximately 272 ships, he said.

Meanwhile, the PLA has begun work on its third aircraft carrier, according to the South China Morning Post, which is rumored to employ a more advanced launch system different from the ski-jump. [The Chinese People’s Liberation Army (PLA) is the armed forces of the People’s Republic of China (PRC) and Communist Party of China. … The PLA is the world’s largest military force, with a strength of approximately 2,285,000 personnel, 0.18% of the country’s population.]

“The US Navy and the capability for the US Navy will still be superior to the Chinese Navy in 10 years, but the size of the Chinese fleet will be larger and they’ll have closed the gap in technology and training,” Ross said.

China has made no secret of its desire to build a modern, “blue-water” navy which could operate around the world. [A blue-water navy is a maritime force capable of operating globally, essentially across the deep waters of open oceans.].

“If you look at China’s acquisitions of facilities in the Indian Ocean and in Eastern Africa, they’re quickly developing the capability to maintain a naval presence in distant waters,” Ross said.

Still, the main focus of the PLA Navy in the near future is expected to be dominating the waters around the Chinese mainland, including the South China Sea.

China is fortifying islands in the region with facilities that could host military aircraft, creating what some experts have called “unsinkable aircraft carriers.”

Last week, US intelligence assessed that there is a high probability the Chinese military had deployed anti-ship and anti-aircraft missiles to three artificial islands there during recent military drills.

Compared to the rest of the Asia region, Ross said, only Japan can currently equal the Chinese navy and even then they probably only had about five years before they too would be surpassed. (from the CNN article above)