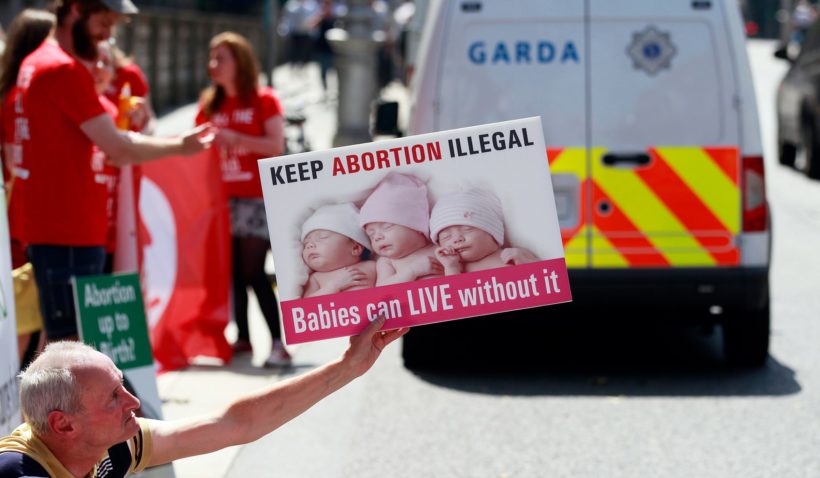 A Pro-Life campaigner demonstrates outside the Irish Parliament ahead of a vote to allow limited abortion in Ireland, Dublin July 10, 2013. (Cathal McNaughton/Reuters)

(by Paul Hannon, The Wall Street Journal) – [The “Save the 8th” campaign held the All Ireland Rally for Life in Dublin on Saturday.

Irish citizens will decide on May 25 whether to repeal the 1983 Eighth Amendment to the Irish Constitution, which grants an equal right to life to an unborn baby and its mother. The proposed reversal of the law would allow unrestricted abortion up to twelve weeks into pregnancy.] [Save the 8th supporters] held their last major rally  two weeks ahead of a vote on [whether to reverse the constitutional amendment which bans abortions in Ireland] – one of the few European countries that still outlaws it.

The organizers said tens of thousands of pro-life supporters demonstrated near Ireland’s legislature, seeking to gather support to keep the ban. …

“We need to boldly speak up for the eighth amendment in these vital days,” said Cora Sherlock, one of the campaign’s leaders, to a crowd waving banners and balloons in bright sunshine. The ‘Rally for Life’ at Merrion Square in Dublin. Photograph: Nick Bradshaw

Ireland is among a small handful of European countries that outlaw the procedure. Northern Ireland, Poland and Malta also outlaw abortion in all or most cases.

Opinion polls consistently point to a majority in favor of lifting the ban. A late April poll conducted by Ipsos Mori found 47% of potential voters backed repeal, with 28% opposed and more than 20% undecided.

The poll recorded that the gap between the two sides had narrowed since the government—which advocates a lifting of the ban—said that, if the ban is lifted, it would propose allowing women to have access to abortion only up to 12 weeks of pregnancy in most cases. Women could terminate their pregnancies later in certain limited circumstances.

The campaign to lift the ban said Saturday it has secured the support of 1,000 practicing doctors at an event attended by Minister for Health Simon Harris, who is one of the chief architects of the referendum to legalize abortion. One of the campaign’s main arguments is that the ban doesn’t prevent Irish women from having abortions, but instead causes them to travel to the U.K. and other countries, or take the risk of buying medicines online. Over 150,000 Irish women have traveled to the U.K. to terminate unwanted pregnancies since 1980. …

[British law states that abortions are permitted up to 6 months (24 weeks) of pregnancy if the continuance would risk the “physical or mental health” of the woman or her children. Approximately 20% of all pregnancies in England currently end in abortion. No statistics were given as to the number of women who chose not have abortions because the 8th amendment gave them time to think about their decision.].

The referendum has resonated deeply in a country that is still overwhelmingly Catholic [and pro-life, although] the number of Irish who said they were Catholic went from 93% in 1981 to  78% in 2016.

…The [pro-life] campaign also suffered a setback when Google announced Wednesday that it would stop carrying advertisements related to the referendum from May 10.

That followed a similar announcement from Facebook that it will limit advertisements on the referendum from groups based overseas. The internet firms [claimed] they were acting as part of a global effort to provide more transparency around political advertising. …

Campaigners supporting the 8th amendment banning abortion criticized those moves, saying access to social-media platforms are needed to offset what they see as bias in favor of repeal among Ireland’s established media outlets. “The [pro-abortion] side doesn’t need Google to campaign,” said Niamh Uí Bhriain, another leader of the campaign to keep the ban. [They have the media.]

The internet companies decided to act after pro-abortion lawmakers who favor repealing the ban [complained] that some advertisements were being placed by unidentified overseas groups….

1. For IRELAND, give the following information:

2. For IRELAND:
a) list the who, what, where and when of the news item
b) What is the 8th?
c) Why has the number of voters who would repeal the ban and make abortion legal risen recently?
d) Why did Google stop carrying advertisements related to the referendum after May 10?
e) Why don’t those who support ending the ban on abortion need Google to campaign, according to the pro-life supporters?
f) Read the “Background” and check out the links under “Resources.” What is your reaction to Gavin Boyne’s story? Do you think it is relevant? Explain your answer.

Dr. Andrew O’Regan, a GP based in Kerry and a member of the Medical Alliance for the Eighth, said he had heard a “litany of falsehoods and exaggerations” which he claimed was “designed to create a climate of panic, to distract from the reality of repeal, which is unrestricted abortion on demand.”

To cheers, student Gavin Boyne (20) said he wanted to express his thanks to those in the crowd who had campaigned for the insertion of the amendment into the constitution in 1983.

“Without your efforts, not only would the Eighth Amendment not exist, but I would not be here today.”

Mr. Boyne said he spoke “on behalf of all of those Irish men and women who are alive today because of your efforts, your efforts to make Ireland a better and a more inclusive society where respect for one another starts in the womb.”

He said his mother had given birth to him at the age of 16 (but several months before she had gone to England to have an abortion before deciding not to). [Watch video of Gavin under “Resources” below.]

He also said that Dr. Peter Boylan, a former master of the National Maternity Hospital who is in favor of repealing the amendment, had “personally attacked” every person who was alive as a result of the pro-life amendment by describing it as a “failed experiment.” (from a May 12 Irish Times article by Elaine Edwards)