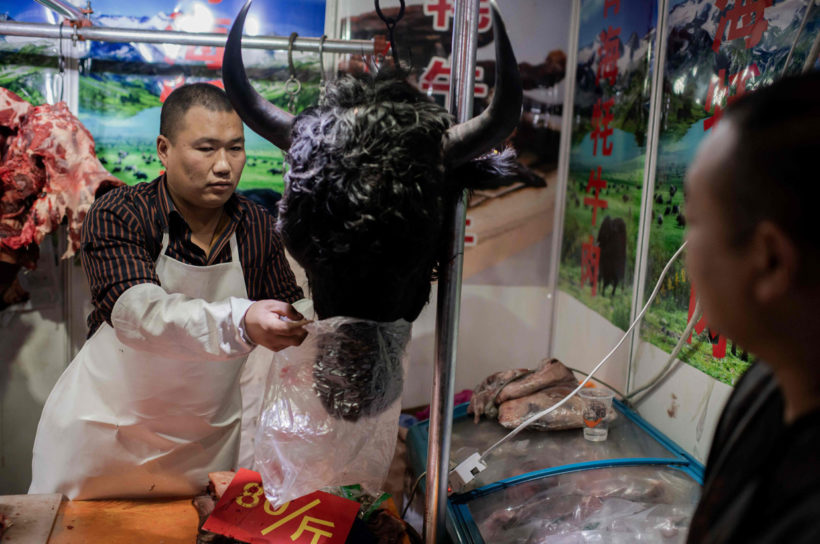 A butcher selling a yak's head to a customer at a market in Beijing. AFP

(by Jeremy Page, The Wall Street Journal) BEIJING—It didn’t take long to identify the suspected source of a deadly coronavirus outbreak in the Chinese city of Wuhan: a cluster of vendors in a downtown market offering carcasses and live specimens of dozens of wild animals—from bamboo rats to ostriches, baby crocodiles and hedgehogs.

The Huanan food market, a scruffy complex of 1,000 stalls spread over an area the size of nine football fields, is the largest of its kind in central China, mostly supplying seafood to Wuhan’s residents and restaurants. It is typical of the wet markets where most people in this country buy their food.

Like many such markets, it also sold wild animals enjoyed as culinary delicacies or used as traditional medicine—an ancient trade Beijing has continued to allow despite warnings that it caused a deadly coronavirus outbreak almost two decades ago and could trigger another global epidemic.

On Sunday, authorities imposed a temporary nationwide ban on the trade of wild animals and quarantined all wildlife breeding centers.

The central government also said it is taking over the effort to stem the outbreak from officials in Hubei province, of which Wuhan is the capital, after those officials’ sluggish reaction drew criticism. State media reported that Premier Li Keqiang has been put in charge of the Communist Party’s new “leading small group” of senior officials that is directing response to the virus nationwide.

Chinese public-health officials warned on Sunday that the virus is growing more contagious.

Hong Kong’s government, meanwhile, said it would deny entry to people who have visited Hubei during the past two weeks in an effort to restrict the spread of the virus. The city has confirmed six cases of the virus in Hong Kong, all from patients who either lived in or recently visited Wuhan.

After giving Huanan market an all-clear during inspections late last year, city officials have now closed it. When Wall Street Journal reporters visited this past week, it was cordoned off by police tape and stall holders were lining up in the rain to receive compensation and Lunar New Year handouts.

Racing to contain the outbreak, which has infected more than 2,700 people and killed at least 80, China’s national authorities have locked down Wuhan and several other cities in Hubei.

Beijing now faces uncomfortable questions over its failure to clean up the wildlife trade in recent years. It is also confronting unusual public calls in China for a permanent ban on wild meat, something it has been reluctant to impose for fear of angering its relatively wealthy aficionados.

President Xi Jinping of China has spoken about the country’s ability to show leadership on global issues, such as public health. His response to the current crisis is likely to be seen as an important test, health experts and political analysts said.

“This incident should be used as an opportunity to rectify the chaos” in China’s wildlife trade, said a petition published on Thursday by 19 prominent Chinese scientists, including a former head of Peking University.

Medical researchers have determined that the outbreak of severe acute respiratory syndrome, or SARS, that started in 2002 (and killed 800 people worldwide) originated in bats and spread to humans via palm civets — cat-sized mammals that look a bit like weasels — sold in Chinese food markets.

Studies have shown that SARS-type coronaviruses reside naturally in bats but can easily jump to other hosts, mutating along the way, especially in markets where species, including humans, mingle.

Although Chinese authorities have yet to identify the precise origin of the current outbreak, a study released on Thursday (Jan. 23) by the Wuhan Institute of Virology, based on patient samples, found a 96% genetic match with a bat coronavirus.

Another Chinese study suggested snakes sold in the market were the source, although other scientists think it less likely the virus jumped between reptiles and mammals.

“This is a wildlife-origin virus—it’s pretty clear,” said Peter Daszak, president of EcoHealth Alliance, a U.S.-based nonprofit organization that has been studying the origins of SARS and related viruses in China for 15 years.

“Probably bats are the origin from looking at the virus itself, and it got from bats into people in the wildlife market,” he said. “This is absolutely déjà vu all over again from SARS.”

China is a hot spot for such outbreaks because it combines large bat populations with densely populated rural areas and a long tradition of eating wildlife, especially in the southern provinces of Guangdong and Guangxi.

“Why do I eat it? It is delicious,” said Terry Gao, a 30-year-old businessman from Guangxi, where he usually eats wild meat. He said he had a particular taste for civets.

“It is really hard to describe. Like how lamb has that special taste, civets are the same. Just the flavor of the meat itself. You don’t need to cook it in any special way: Once you taste it, you’ll know it’s civet.” 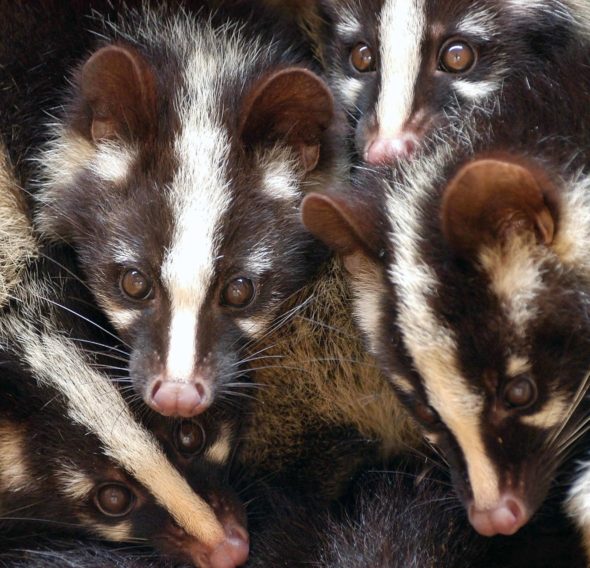 Civets wait for food in 2004 at a farm in Liuan, China. The country banned selling and eating of civets after the animals were confirmed to be host of the SARS coronavirus. (China Photos/Getty Images)

He said he had long known of the health risks and would avoid eating wild meat during the current outbreak, but attributed the problem to poor regulation rather than consumer demand. …..

The market at the epicenter of the current outbreak, officially known as the Wuhan Huanan Seafood Wholesale market, was home to vendors selling a range of wild meat.

One of them, called Dazhong Livestock and Game, boasted that it could provide more than 100 wild animals, freshly slaughtered or flash frozen, on site or via home delivery, according to a price list published online. Among the most expensive items were a live ostrich for 4,000 yuan (about $580) and a small live deer for 6,000 yuan. The list also included baby crocodiles, wolves and hedgehogs. The owner couldn’t be reached for comment.

The Wuhan Market Regulation Administration inspected the market in November and December but found nothing wrong, according to documents published on its website. It didn’t respond to a request for comment.

In September, local officials also inspected some eight stalls selling wild animals and checked their business licenses but found nothing illegal, according to the website of a newspaper run by Wuhan’s Communist Party committee.

In a rare admission for a senior Chinese official, Wuhan Mayor Zhou Xianwang told the official Xinhua News Agency that local authorities had failed to properly regulate the market—one of 400 in the city. …..

—James T. Areddy and Shan Li in Wuhan, Qianwei Zhang and Xiao Xiao in Beijing, and Yifan Wang in Singapore contributed to this article.

Published by wsj .com on January 26, 2020. Reprinted here for educational purposes only. May not be reproduced on other websites without permission from The Wall Street Journal.

2. For CHINA:
a) list the who, what, where and when of the news item
b) For what purposes do people buy wild animals at the food markets in China?
c) What warnings about the sale of wild animals and wild animal meat has the central communist government ignored for years?
d) What action on the sale of wild animals is the central government now taking?
e) Why is it important to Xi JinPing to solve this crisis competently?
f) What previous epidemic was caused by wild animals sold in Chinese markets in 2002?
g) How important do you think it is to people worldwide that China’s communist government stop this epidemic and ensure steps are taken to prevent future epidemics?

Since SARS, China has vastly improved its capacity to respond to disease outbreaks, health experts said. It has also improved hygiene at wet markets, and sought to encourage licensed trade in wild animals bred on farms where they must undergo sanitary checks.

And yet regulation of wildlife farms and markets has been lax. As a result, an underground trade has thrived, with restaurants often commissioning wild meat—including endangered species—from hunters via middlemen, researchers and wildlife activists said.

Online trading has also made it easier to source and distribute wild meat across China and to import creatures such as pangolins from other countries, exacerbating the risk of infections spreading over longer distances. …

“If China doesn’t take action on this now, I fear this is just going to happen again,” said Zhou Jinfeng, head of the nongovernmental China Biodiversity Conservation and Green Development Foundation.

Mr. Zhou, who has filed official complaints about wildlife markets all around China, estimated that there were hundreds in the country, with at least one in every major city like Wuhan, and more still online.

“The authorities just don’t take any notice,” he said. “They think it’s good for the local economy.”

China banned all wildlife trade in 2003, when Hong Kong researchers first identified civets as a potential source of SARS, but it lifted the ban later that year on 54 species—including civets—that it said could be bred in licensed farms, subject to sanitation checks.

Guangdong province banned the breeding and sale of civets in 2004, but they continued to be traded there and in other provinces. On Thursday, Guangdong imposed a total ban on wild-animal trading.

The central government, however, was slower to respond. First the agriculture ministry ordered a halt on Friday to the trade only of wild animals that can carry the coronavirus, which it said included badgers and bamboo rats. Two days later, the State Administration of Market Regulation declared a ban on all wildlife trade but said it would end once the outbreak was over.

The Communist Party’s Central Commission for Discipline Inspection, usually focused on fighting corruption, also made an unusual appeal for people to stop eating wild meat in a posting on its website in recent days. “We must respect the laws of nature and promote scientific and healthy eating habits,” it said.

The first signs of the outbreak came on Dec. 29, when four workers at the market were admitted to a Wuhan hospital with pneumonia.

The hospital alerted the local center for disease control, and Wuhan authorities closed the market on Jan. 1. Health officials took specimens from the site and found evidence of the virus in 33 out of 585 samples, according to the Chinese Center for Disease Control and Prevention, or CCDC.

The virus had been found not just in people’s bodies, but on wild-meat stalls, Gao Fu, the CCDC director told Chinese state television on Thursday. “We must thus call on everyone not to eat wild animals,” he said. “It is only a matter of time to find out which is the specific animal.”

(from the WSJ article above)