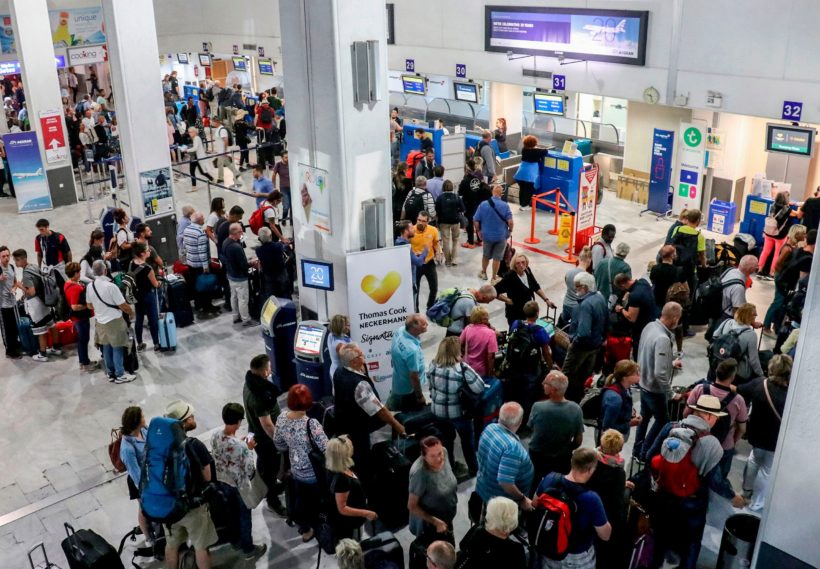 Tourists wait at a Thomas Cook company counter at Heraklion airport on the island of Crete on September 23, 2019. British travel group Thomas Cook declared bankruptcy on Sept. 23, 2019, after failing to reach a last-ditch rescue deal. About 150,000 British customers in vacation spots around the globe were stranded. (Costas Metaxakis, AFP/Getty Images)

(by Carlo Piovano and Gregory Katz, for the AP at CTV News) LONDON — Hundreds of thousands of travellers were stranded across the world Monday after the British tour company Thomas Cook collapsed [shut down; went out of business] in the middle of the night, immediately halting almost all its flights and hotel services and laying off its employees.

Britain’s Civil Aviation Authority announced about 2:30 a.m. that Thomas Cook, a 178-year-old company… had ceased trading. It said the firm’s four airlines were grounded, and its 21,000 employees in 16 countries — including 9,000 in the U.K. — will lose their jobs.

The collapse of the firm is expected to have sweeping effects across the European and North African tourism industries and elsewhere, as hotels worry about being paid for tourists they have already served and confirmed Thomas Cook bookings for high-season winter resorts suddenly are cancelled.

Overall, about 600,000 people were travelling with the company as of Sunday, though it was unclear how many of them would be left stranded, as some travel subsidiaries were in talks with local authorities to continue operating. Thomas Cook says it served 22 million customers a year.

The British government was taking charge of getting the firm’s 150,000 U.K.-based customers back home from vacation spots across the globe, the largest repatriation effort in the country’s peacetime history. The process began Monday but officials urged patience and warned of delays.

An estimated 1 million future Thomas Cook travellers also found their bookings for upcoming holidays cancelled. Many of them are likely to receive refunds under travel insurance plans but had no idea when they would get their money back.

Lewis and Amy Bromiley, from Manchester, England, had paid 7,000 pounds ($8,700) for a January honeymoon in the Maldives.

“Me and my wife are devastated,” said Bromiley, 25. “We’ll have to wait for the refund, which could take months.”

Most of Thomas Cook’s customers from Britain are protected by the government-run travel insurance program, which makes sure vacationers can get home if a British-based tour operator fails while they are abroad. …

…British authorities said they had chartered dozens of aircraft to fly customers home free of charge over the next two weeks, and hired hundreds of people to staff call centres and airport operations centres, [but warned of delays and urged patience].

British Prime Minister Boris Johnson, who was travelling to New York for the U.N. General Assembly, said the government was right not to bail out the company, arguing that bailing out Thomas Cook could have led other firms to expect the same treatment. …

Thomas Cook’s collapse is also a blow to the many companies in vacation resorts that have long relied on it, including the 3,150 hotels it does business with.

In Spain’s Canary Islands, a favoured year-round destination for Europeans, the association of hotels said it feared an economic hit, especially from the loss of the winter holiday bookings. The Spanish government was holding meetings Monday with regional authorities to assess the damage.

In Tunisia, the TAP news agency said the tourism minister intervened after reports that some Thomas Cook tourists in Hammamet were locked into one hotel and “being held hostage” as hotel staff demanded they pay extra.  The government said the situation was resolved and Thomas Cook clients would not be prevented from leaving the country.

From and AP report published by CTV News .ca on September 23, 2019. Reprinted here for educational purposes only. May not be reproduced on other websites without permission from the Associated Press and Canadian TV News.

2. For THE UK (UNITED KINGDOM):
a) list the who, what, where and when of the news item
b) How have people been affected by the sudden shut down of Britain’s Thomas Cook? Be specific.
c) For what reasons did the travel agency shut down?
d) How long has Thomas Cook been in business?
e) What is your reaction to this respected business announcing they were shutting down suddenly in the middle of the night?

An estimated 1 million customers also found their bookings for upcoming trips cancelled. Many of them are likely to receive refunds under travel insurance plans but had no idea when they would get their money back. Thomas Cook said it served 22 million customers a year.

The company, which began in 1841 with one-day train excursions in England, grew to have travel operations around the world but has been struggling for years because of competition from budget airlines and low-cost online booking sites.

In contrast to internet sites, Thomas Cook had high fixed costs: It operated a fleet of 105 jets and owned about 550 travel agencies on major streets across Britain as well as 200 hotels in sun-drenched countries.

“The growing popularity of the pick-and-mix type of travel that allows consumers to book their holiday packages separately, as well as new kids on the block like Airbnb, has seen the travel industry change beyond all recognition in the past decade, as consumers book travel, accommodation, and car hire independently,” said Michael Hewson, chief market analyst at CMC Markets.

Business was also hurt in recent years by terror attacks in the Middle East and heat waves in Northern Europe that led people to stay home.

Things got worse this year, with the company blaming a slowdown in bookings on uncertainty over Britain’s impending departure from the European Union. A drop in the pound also made it more expensive for Britons to travel abroad.

While many of these factors also affected rival companies, Thomas Cook was also burdened by $2 billion in debt. It was seeking 200 million pounds ($250 million) to avoid going bust and held talks over the weekend with shareholders and creditors.

CEO Peter Fankhauser stood outside the company’s offices before dawn and announced that the effort to stave off collapse had failed.

“I know that this outcome will be devastating to many people and will cause a lot of anxiety, stress and disruption,” he said.

(published at ctvnews .com on Sept. 23, by Carlo Piovano and Gregory Katz and Carlo Piovano, The Associated Press)